Lynda Chanwai-Earle discovers that balance is quintessential to Vietnamese food and philosophy when she follows a Secret Dining Trail with the Wellington on a Plate Festival to learn where to find the best of the best Vietnamese cuisine for some real culture on a plate. The Vietnamese trail starts with ingredients and preparation and ends with a lesson on the "Yin and Yang" of food. 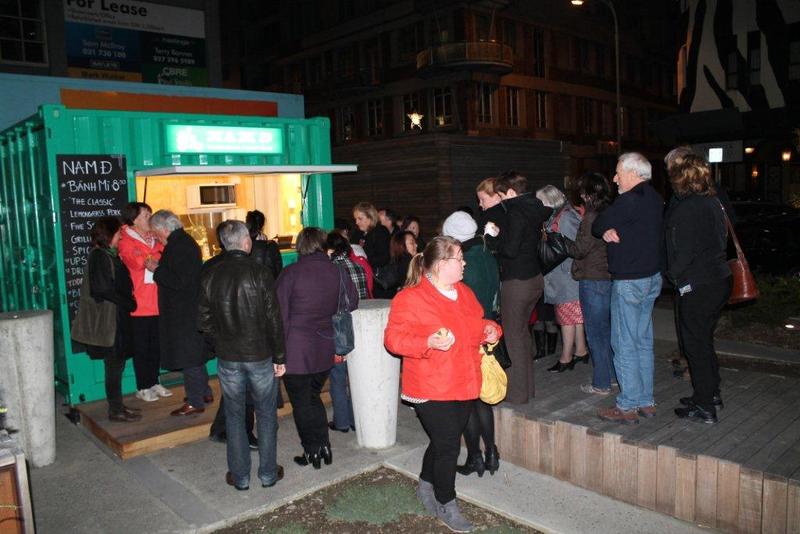 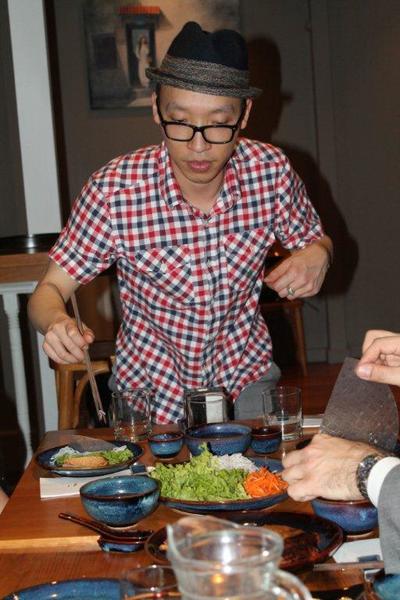 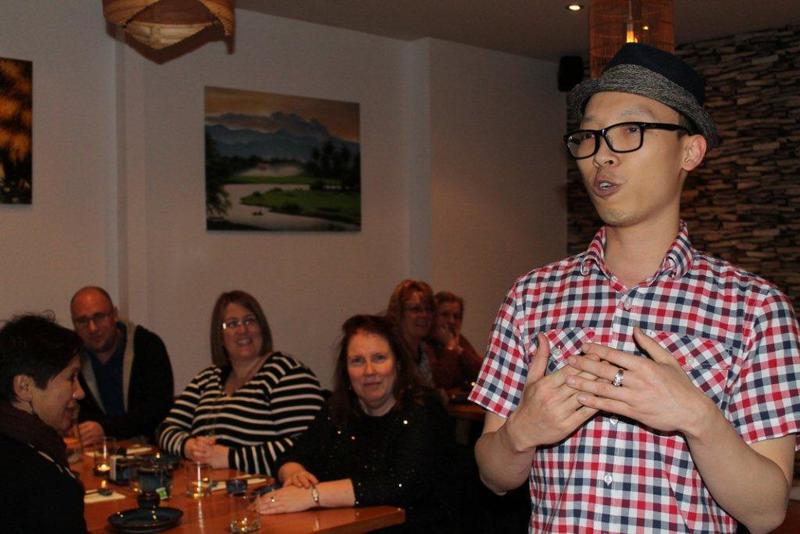 Henry Tran explains the Yin and yang of Vietnamese cuisine 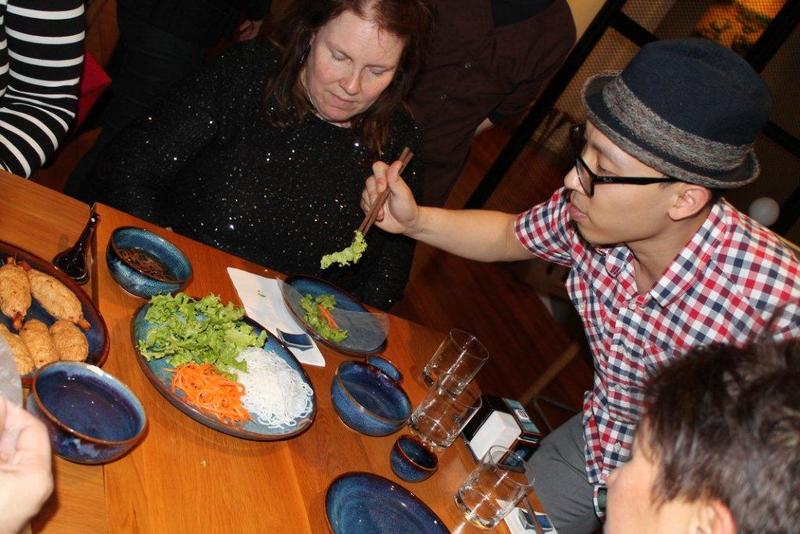 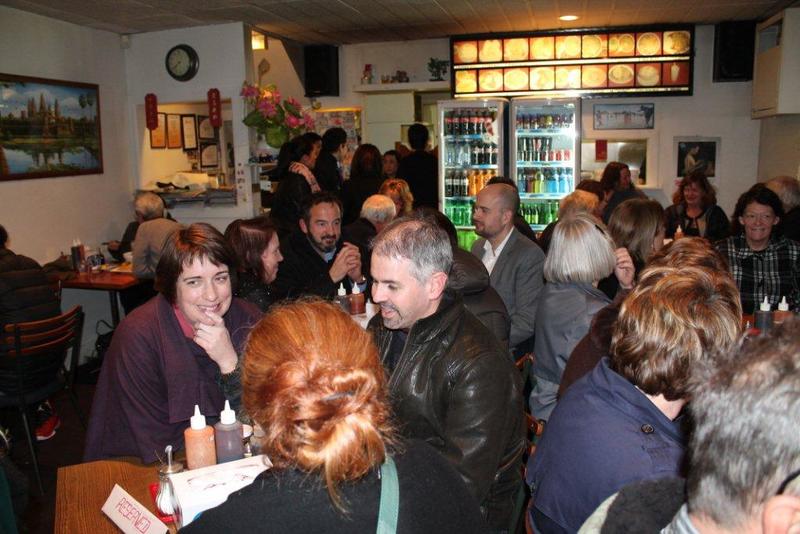 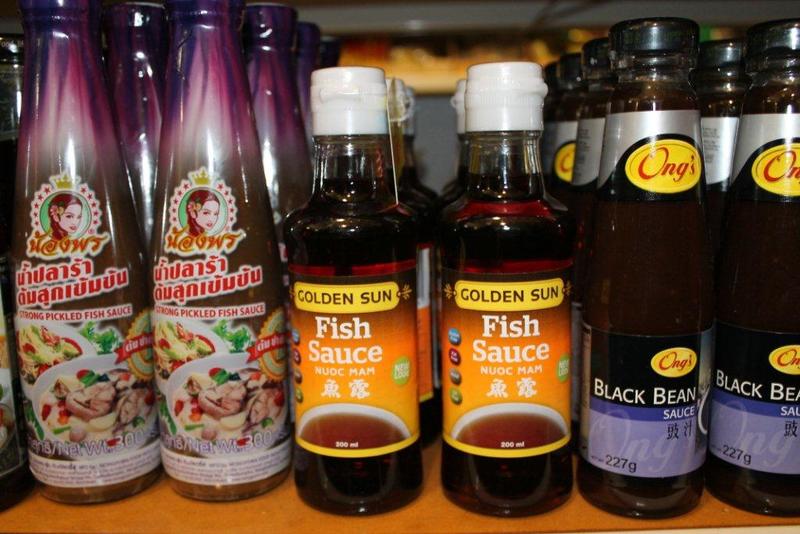 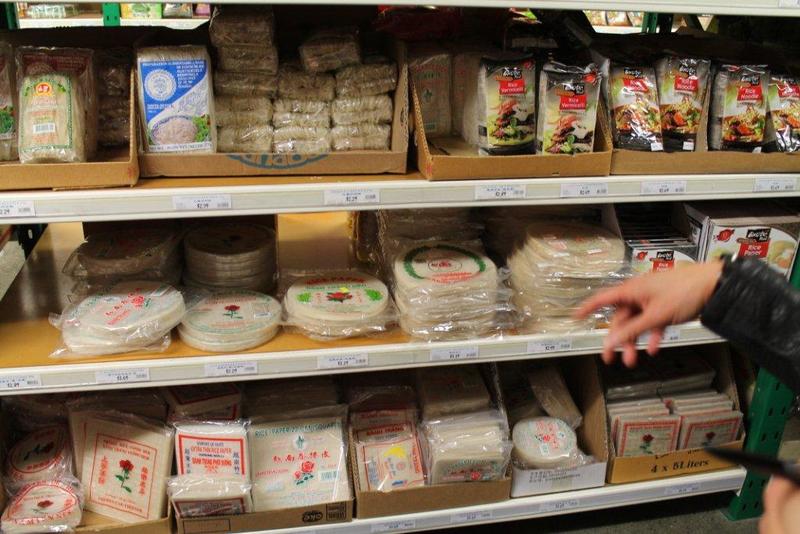 Varieties of rice paper for spring rolls and summer rolls 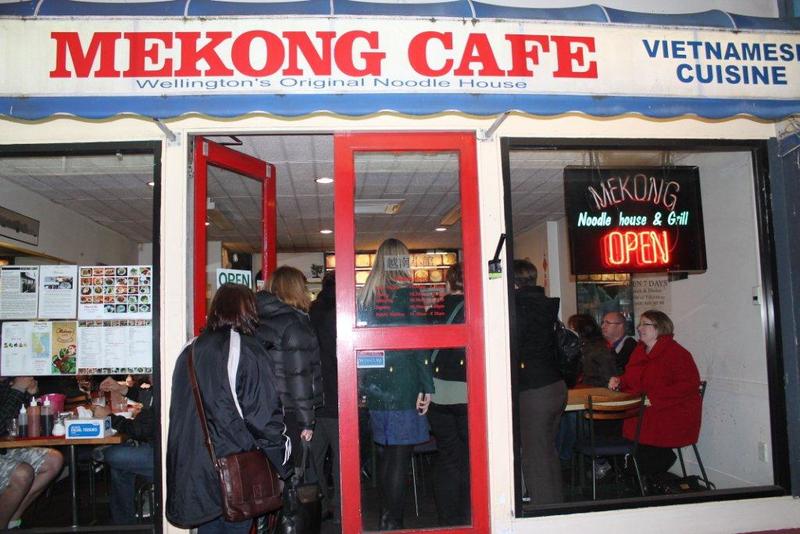 Mekong Cafe - one of oldest Vietnamese establishments in New Zealand 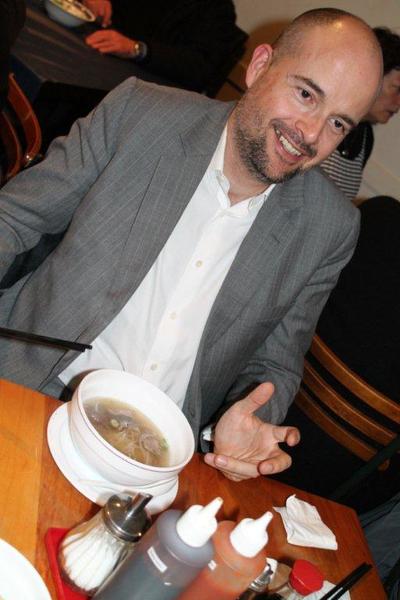 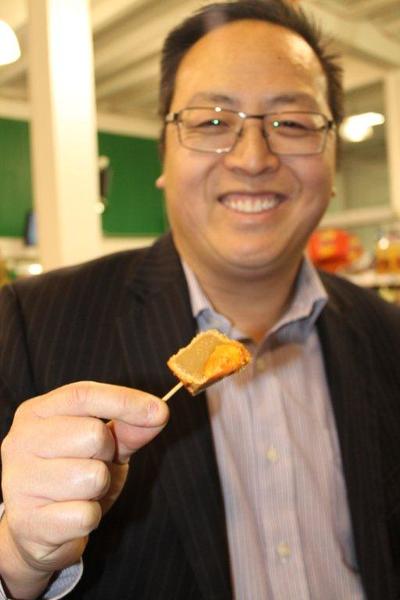 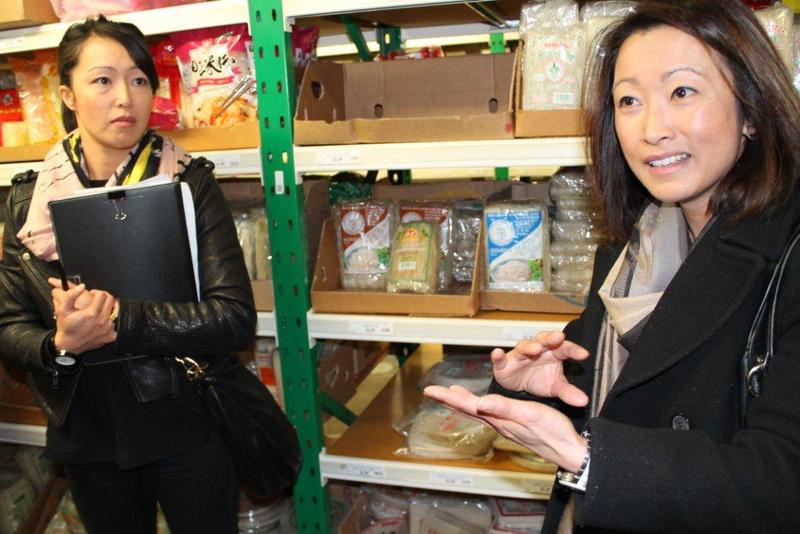 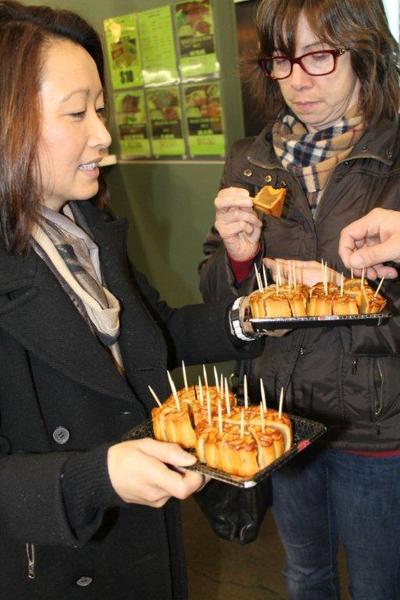 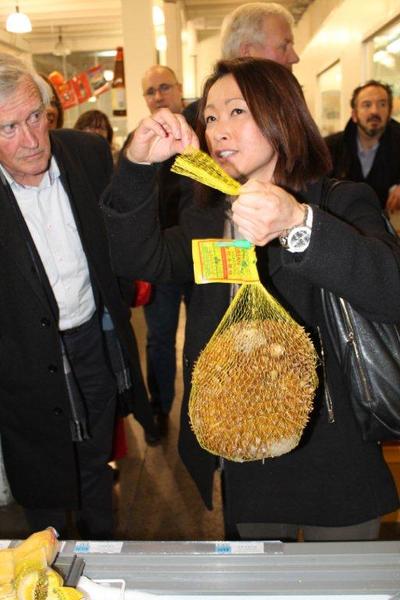 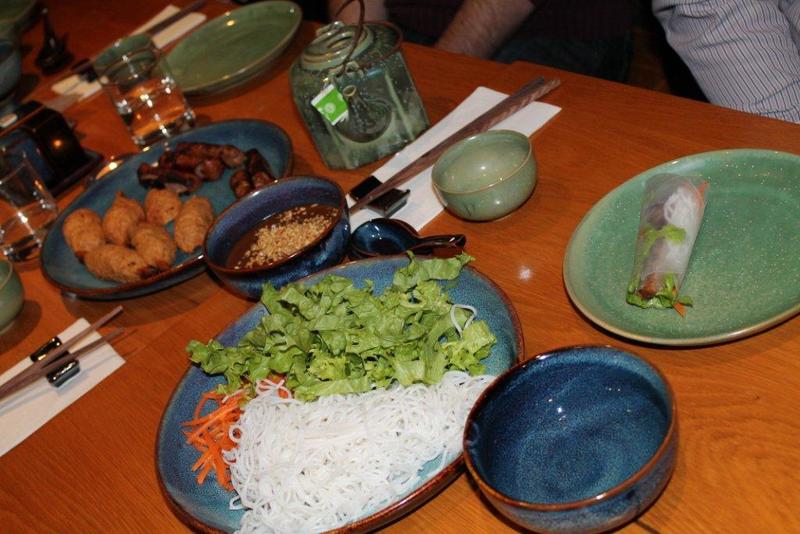 The ingredients for summer rolls at Saigon Van 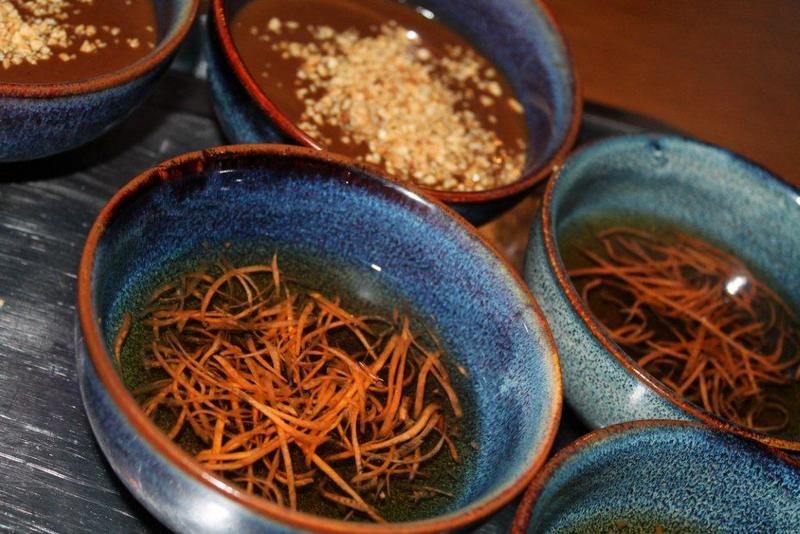 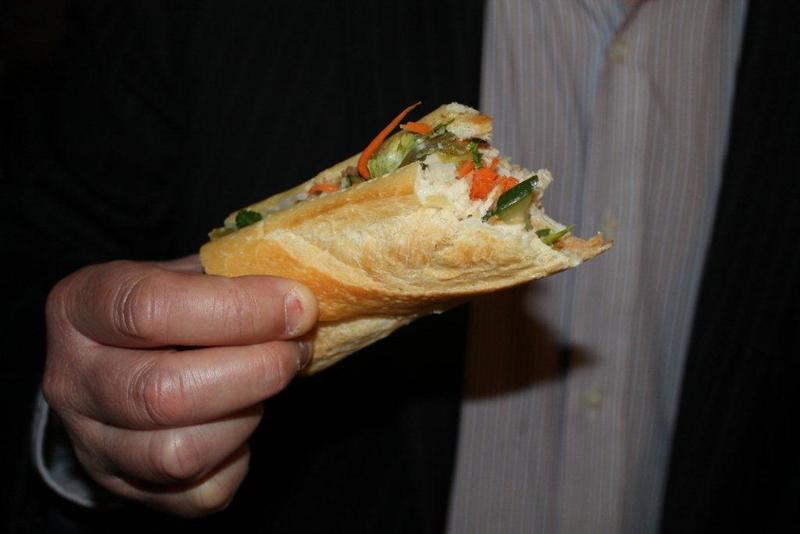 It's Vietnamese, not French! 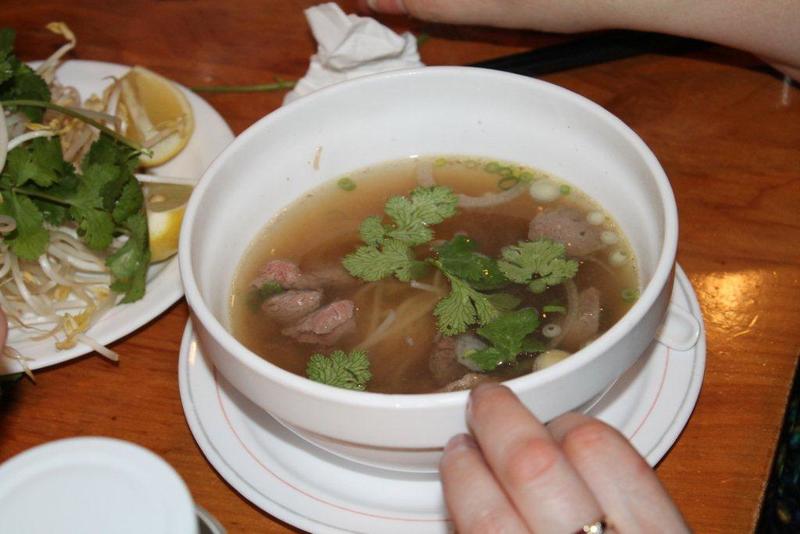 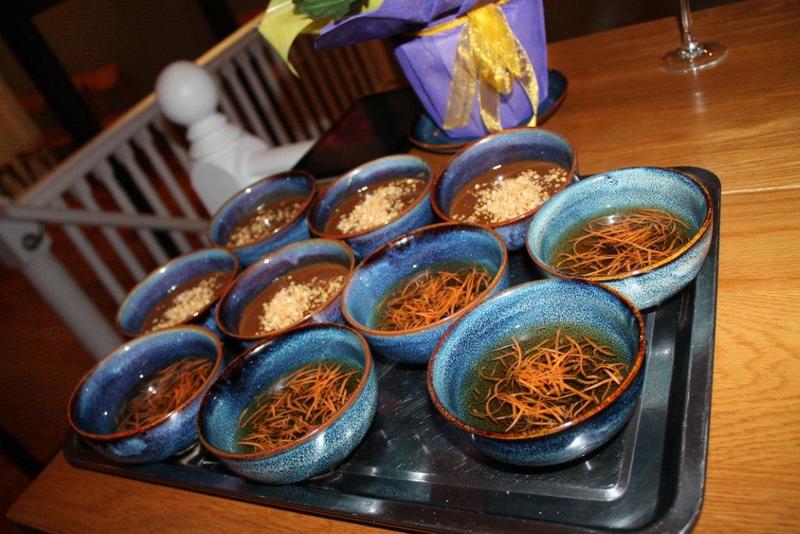 The dipping sauces - including nuoc cham - at Saigon Van 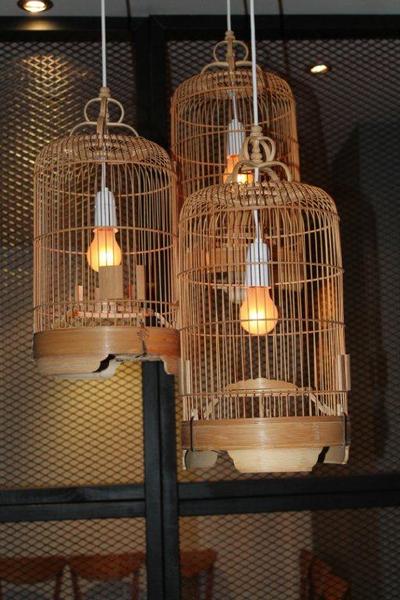 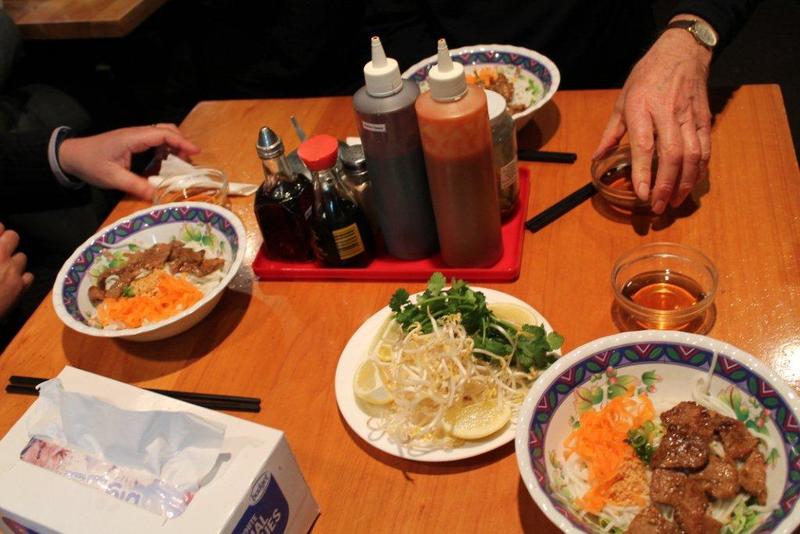 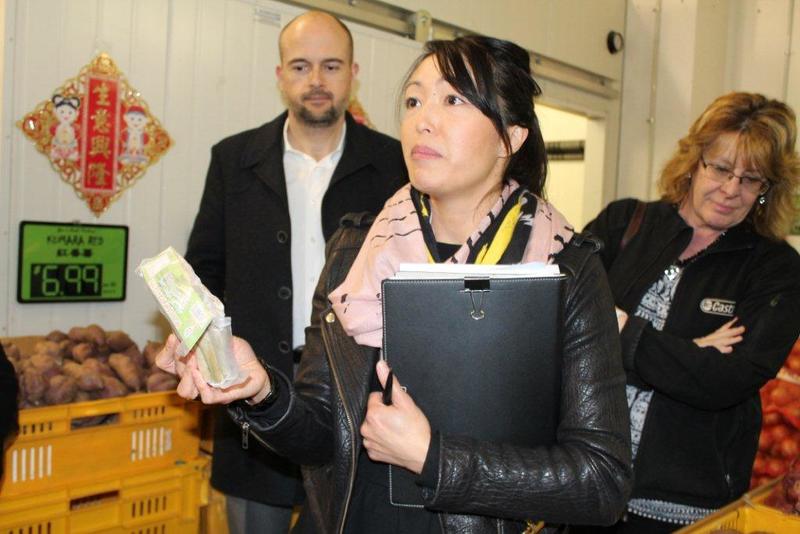 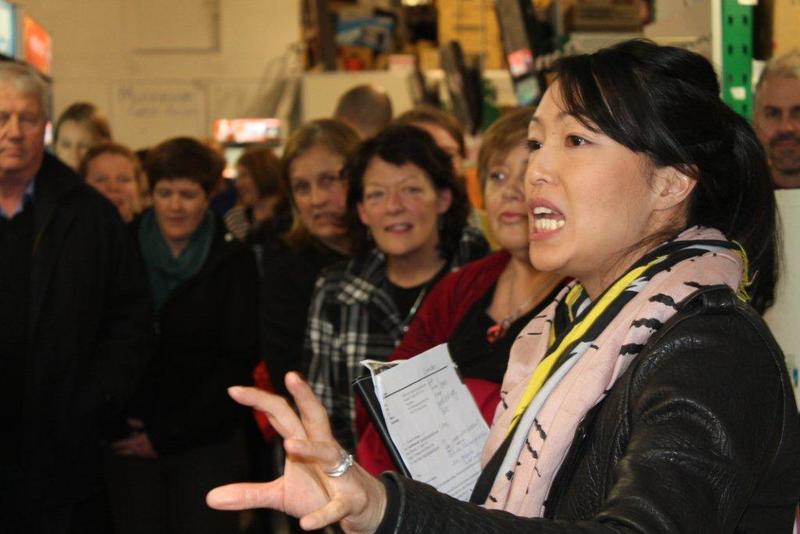 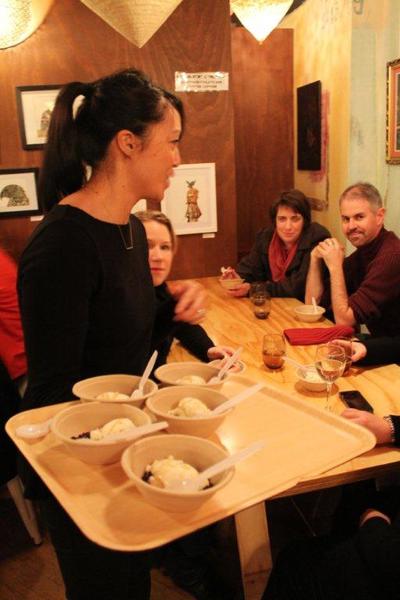 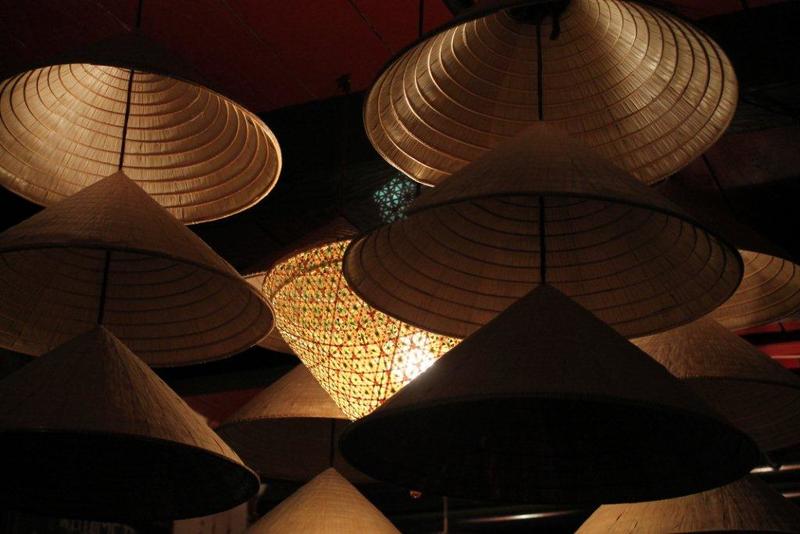 We make a lot of “roll your own” in Vietnam; a lot of hot and cold, pork and prawn. Its yin and yang, it’s about balance – so you don’t get sick of the food! Henry Tran, owner Saigon Van Restaurant, Wellington

“Secret Dining Trail – Vietnamese” is the name given to the event by the Visa Wellington on a Plate Festival which saw around 30 patrons hit the streets of Wellington in search of some culture on a plate. Patrons are braving the unknown – the trail is so secret in fact, none of the patrons know where they’re going next so it’s imperative to find the group and stick with them.

Tonight we take to the backstreets on foot under the guidance of local experts to the hotspots and undiscovered gems of Wellington’s dining scene. Along the way we’re learning where to find the best of the best Vietnamese flavours whilst meeting some of Wellington’s most interesting foodies.

The three secret dining trails (Malaysian, Chinese and Vietnamese), sponsored by the Asia New Zealand Foundation, means that patrons are in for a treat. They'll observe Vietnamese chefs in action while taste-testing some age old traditional dishes in this very popular festival in the Capital.

Northern Vietnam and southern China were peopled by many ethnic groups. During the 1,000 years between independence from China in the 10th century and the French conquest in the 19th century Confucianism reigned and Vietnamese society changed little.  Classic Vietnamese cuisine and culture evolved from this history.

Tonight’s meeting point is Yan’s Supermarket in Wellington’s CBD. Vietnamese New Zealanders Tranj Jones and Nikki Chung are our tour guides. They are also sisters, Nikki is the eldest and the owner of Nam D, a local restaurant. She's struggling with laryngitis so younger sister Tranj is taking the lead and showing us through Yan’s.

Tranj tell us that very fine vermicelli noodles are ideal for summer rolls and salads, thick mung bean noodles for broths and stir-fries and the variously shaped sheets of rice paper are used to make both deep fried spring rolls and fresh summer rolls.

“How do you stop it from falling apart when you roll them?” asks one patron. Voice or not Nikki just has to share her cooking secrets; “It's all in the water; dip the rice paper quickly in hot water, not too long, so the paper is just wet. Then you roll it tight, like sushi.”

Tranj tells us that fish sauce is as essential to Vietnamese cuisine as soy-sauce is to the Chinese. Every household will have bottles of this pungent sauce. "It's important not to spill it," she says, "otherwise you'll never get the smell out." Fish sauce is used frequently for flavouring and dipping... as is fresh herbs like coriander, lemon grass and Vietnamese mint.

Another popular and very pungent ingredient used in Vietnam as well as across Asia is the durian fruit, derived from the Malay-Indonesian word for duri or 'spike'. Richard, a well traveled patron from the U.K. tells us that it's banned from the trains in Singapore. Nikki tells us that durian is very popular in milkshakes and icecreams, especially in the hot southern regions of Vietnam.

Then we’re given a little taster of green bean and salted duck egg moon cake – before we head to Saigon Van Restaurant in upper Cuba street.

Henry Tran, the owner of Saigon Van Grill Bar Restaurant tells me it was Dunedin based for 8 years and has only recently opened in Wellington.  He demonstrates to the group how to make the summer rice paper rolls, fun for the patrons as they can decide what fillings they want, including one delicious pork and prawn combination cooked around a small stick of sugar cane.

Henry explains that it’s all about "balance" – a quintessential part of Vietnamese culture, philosophy and cuisine, (which go hand-in-hand).

Hot and cold, salty and sweet, raw and cooked, it’s about the yin and yang of food, as in life. Vietnamese food is served in lots of small contrasting portions, so you don’t get sick of it.

There is just enough time to taste Saigon Van's tiny spring roll special. Henry shows me the rice paper that makes this. It looks like a fine lace doily and is very hard to roll, it has to be warmed while doing so and there's quite an art to it. The result is an exquisite wee morsel that goes great with nuoc cham.

Mekong Café in Vivienne Street is the oldest Vietnamese restaurant in Wellington and possibly NZ. The owner Kai is serving traditional pho, beef noodle broth with its accompanying salad. It takes 8 hours to slow cook the beef brisket with spices like star of anise and the broth must be almost clear.

I discovered that Pho Bo (sounds a little like “fuh” or “faux”) is a “slow cooked beef noodle broth” and a beloved part of Vietnamese cuisine, popular as a morning or lunch meal.  The term pho refers to the noodles, not the soup but Vietnamese consider the flavour and consistency to be the true test of a great pho.  A complete meal in itself and true to the balanced nature of their cuisine it comes with fresh and spicy salad condiments.

Both Nikki and Kai the chef at Mekong Café tell me that a great pho is crystal clear, like a French consommé. For pho bo (beef), beef bones and brisket or oxtail and flank are slow cooked for around 8 hours, with fragrant ginger, cinnamon, star of anise, cloves and cardamom.

This soup can be served with several toppings, including cooked and or finely sliced raw beef. The large, fresh white rice noodles are cooked separately at the last minute and added to the broth along with a sprinkling of fresh coriander.

Nikki tells me that the North and South of Vietnam have starkly contrasting climates and this is reflected in the cuisine of the regions. North Vietnam likes saltier, spicier and savoury cuisine – flavoured with unadulterated pungent fish sauce and chilli. The North has around 200 years of French inspired cooking traditions with long, slow cooked broths and meats, and more baked foods like pastries and baguettes.

In contrast, South Vietnam has a hot, sub-tropical climate so its home to grilled and BBQ foods. The palate is sweeter, with fish sauce being diluted and added to other condiments to make dipping sauces. The hot climate means a prevalence of fresh spicy salads and raw ingredients such as classic summer rice paper rolls.

At the Nam D Street Food Stall on Tory street Nikki explains popular Vietnamese street food including the French derived baguette. She tells us that their Vietnamese baguette is baked by a Vietnamese Bakery in Lower Hutt and made flatter and crustier than the French version with more emphasis on the spicy fillings. Pickled carrot and daikon, coriander and spring onion accompany one of 5 meat fillings. In Nam D’s case the secret ingredient is their home-made chicken liver pate.

Then we're walking to Nikki’s Nam D Restaurant in Willis Street. On the way Nikki tells me why her family’s recipes are so special and what drives her to share them.

As a child I spent a lot of time in the kitchen helping my mum. We came over here as refugees and we didn’t have a lot. To me watching and learning from my mum was really important.

Nikki arrived in New Zealand at 3 years of age, she and her parents were part of the wave of refugees fleeing the war in Vietnam at the time, she tells me they were “boat people.”

“Back then in the 1980’s there was nothing in the way of ingredients so my mum had to improvise. She produced all these meals with so little." Nikki and Tranj's mother still helps out at the restaurant making the sauces.

At Nam D we’re being served Vietnamese coffee, beer and desert. Richard tells me his Bia Hanoi beer has honey overtones as Tranj serves me a classic non-alcoholic Vietnamese refreshment. Tranj tells me the drink, simply called “lemon soda” – is all in the pronunciation, with the Vietnamese drawl on “so-daaa.”

Real lemon juice, coriander  and Vietnamese mint are crushed with ice and sugar syrup, and in typical balanced Vietnamese fashion, salt is added to the rim, it's salty and sweet.

Paul, another patron from the U.K. tells me that given a little splash of tequila or vodka the “lemon soda” might be an unbeatable cocktail.

Tranj also shows me their “drip-drip” coffee, a French style 2 cup percolator. The cute little pots look like they have little hats sitting atop. It takes about 5 minutes for boiling water to “drip” its way through the chicory flavoured coffee grind into the sweetened condensed milk, resulting in a rich and aromatic coffee.

I slip behind the scenes into the kitchens of Nam D where Nikki is preparing their dark, sticky glutinous rice puddings, distinctly coconut and palm sugar flavoured.

Nikki serves everyone her homemade desert with a dash of coconut gelato and after a taste I’m in heaven. It’s the perfect and satiating end to a secret trail that’s not so secret now, experiencing some hidden gems around Wellington’s CBD for a taste of Vietnam's culture on a plate.