Saving lives - a sister speaks out

Lynda Chanwai-Earle brings us the exclusive story of a young woman speaking out for the first time after losing her mother and younger sister to domestic violence - Rida Noor is the ambassador for 'Find Your Voice' - a campaign aimed at ethnic youth in our country. 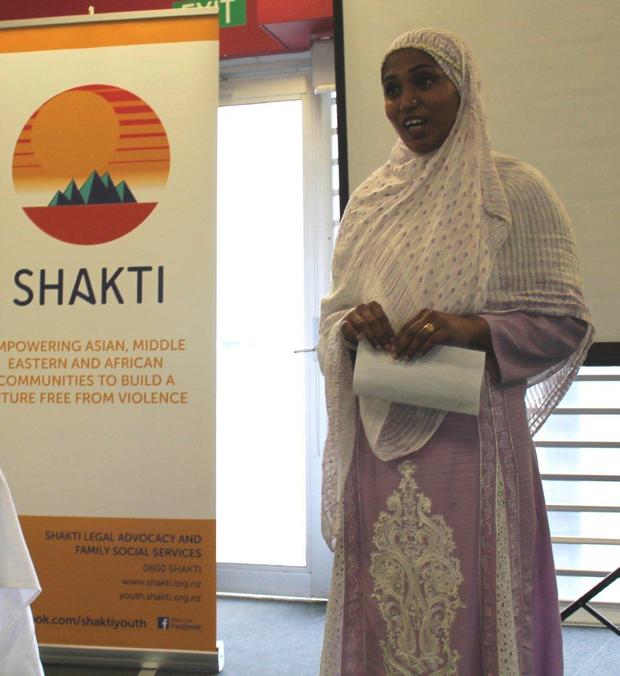 It can become normalised if it has been going on for years and years. It’s important to create awareness and break the silence around domestic abuse.

On May 19, 2014 Ishrat Malik called his eldest daughter to tell her he had "finished" her mother and younger sister. Farhat Rana and her 18-year-old daughter Sidra Noor lay dead in the family's Ranui home, in West Auckland. He had stabbed them to death.

The tragic deaths of Pakistani-born mother and daughter Farhat Rana and Sidra Noor in West Auckland attracted intense media focus and created a lot of public discourse around Rana as the primary victim of domestic violence but little attention was paid to Sidra who had to witness violence between her parents since a young age.

Sidra Noor was just 18 when she lost her life at the hands of her own father.

In Sidra’s memory, Shakti Women’s Refuge Youth Unit developed a campaign titled Find Your Voice to assist ethnic youth to be empowered to reach out for help. Sidra’s surviving elder sister Rida Noor is the community ambassador for the campaign and speaking publically for the first time about her experiences, having witnessed violence growing up.

The campaign launch is taking place at the Wesley Community Centre in Sandringham, Auckland.  Rida has agreed to speak with me before it starts. Her two toddlers play around her as she explains her motivation to speak out.

“When I think about my children, I would hate them to go through what I went through. Domestic abuse might not always be visible to normal people or to the public because the scars are always hidden. For us; me, my brother, my sister and my mum, for all of us it was always psychological. It was years and years of psychological and financial abuse. It’s very difficult when the abuse is like mental torture.”

During the trial Rida’s victim-impact statement had said she felt "numb . . . like I can never be normal again. I never thought the first funeral I would have to go to in my life would be for my mum and younger sister," she goes on to say, "I helped wash their bodies and saw every stab wound. I realised how evil he was and the struggle my mum and sister would have had to go through to try and stop him." 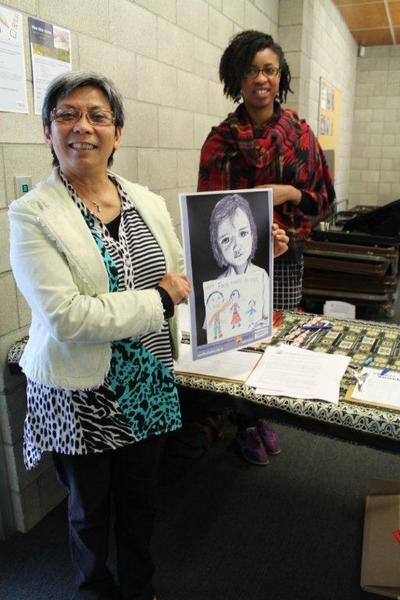 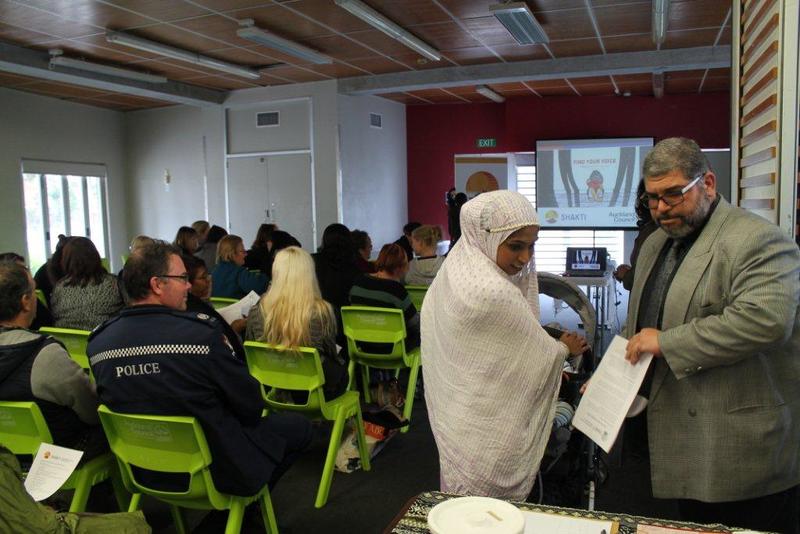 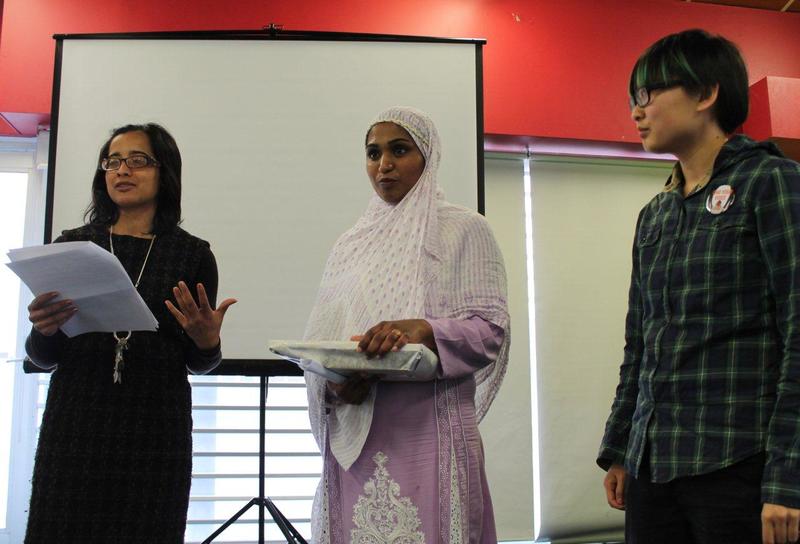 Rida Noor is flanked by supporters from Shakti Women's Refuge 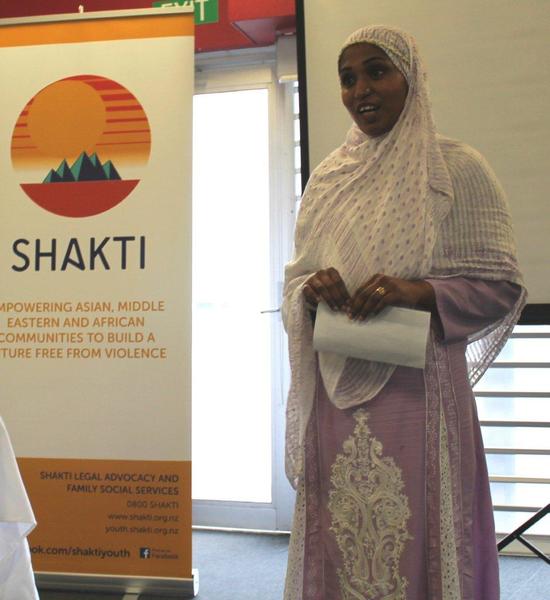 Rida speaks publically for the first time at the campaign launch 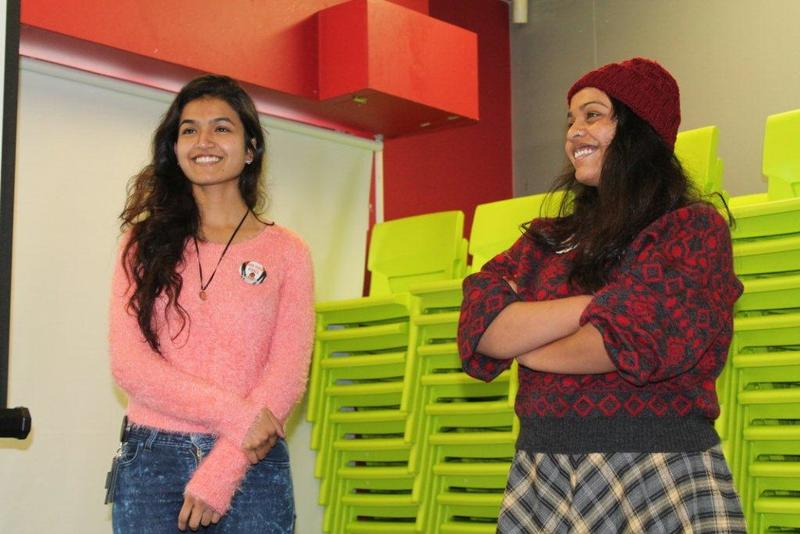 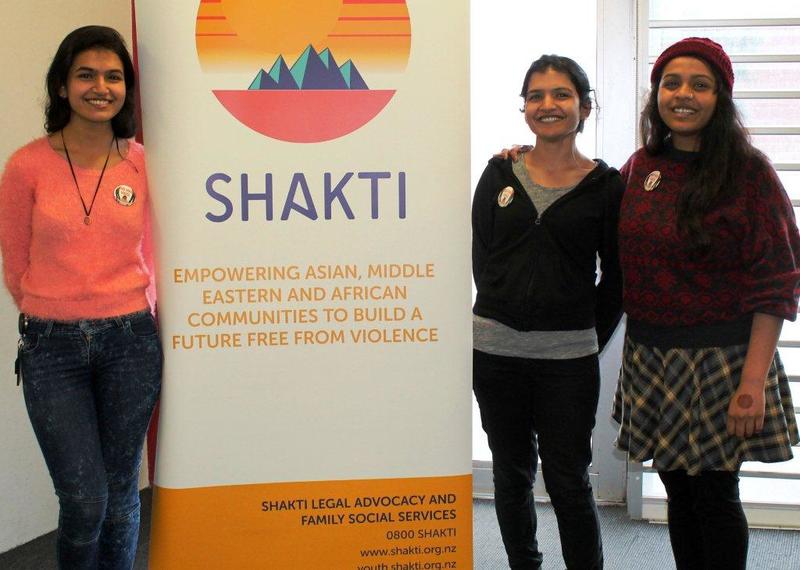 Sisters from the Pakistani community speak out Sehar Mehwish and Sabah (Shakti Youth). 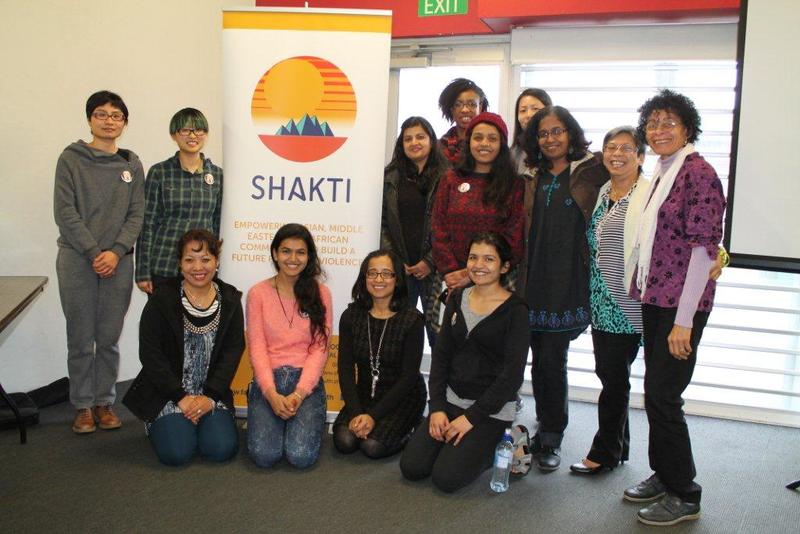 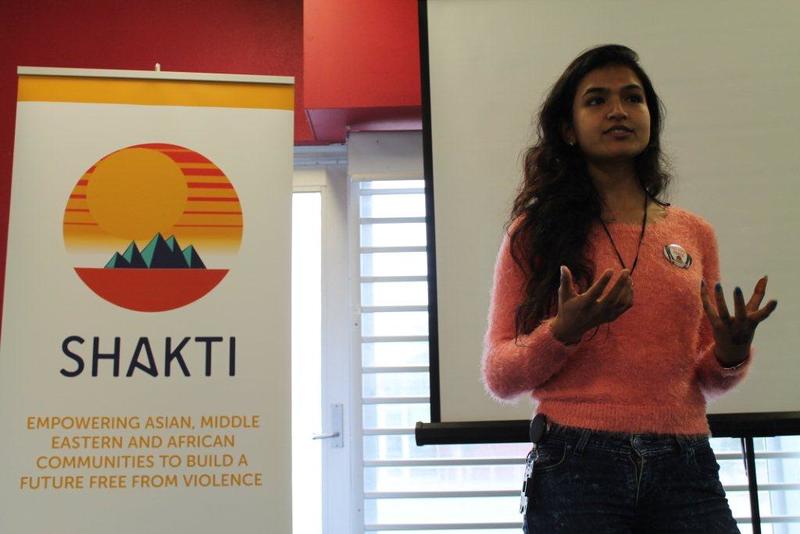 Sehar from Shakti Youth speaks out too 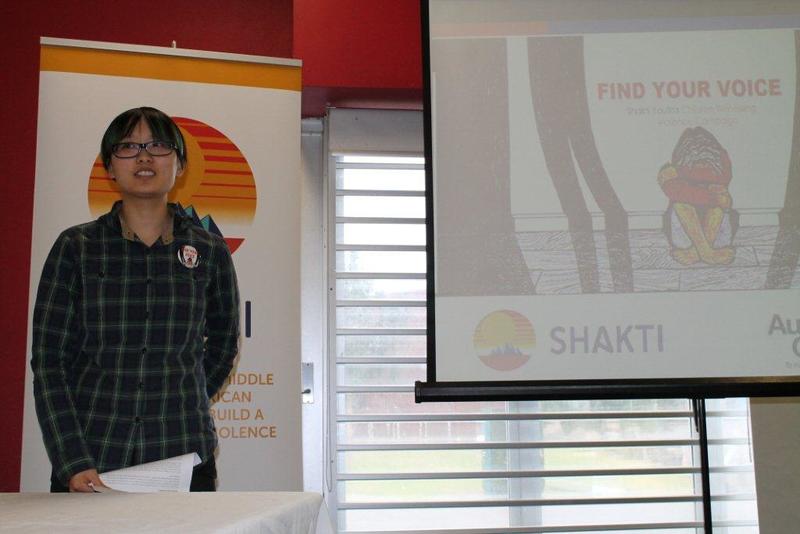 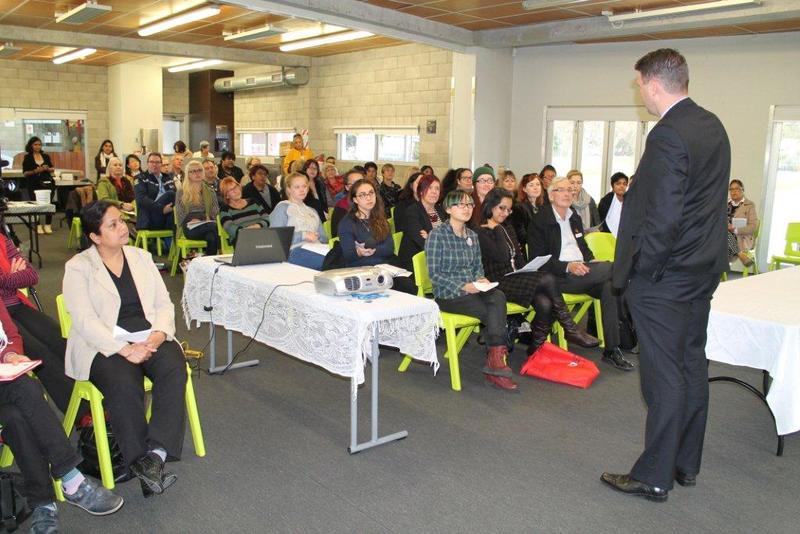 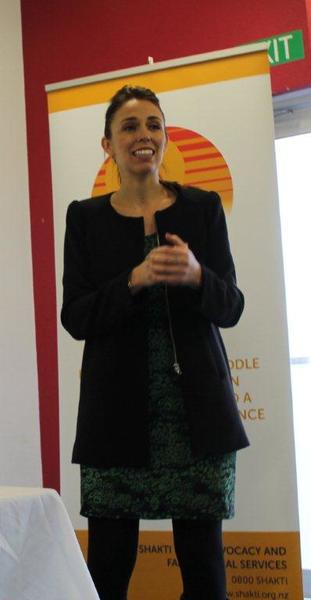 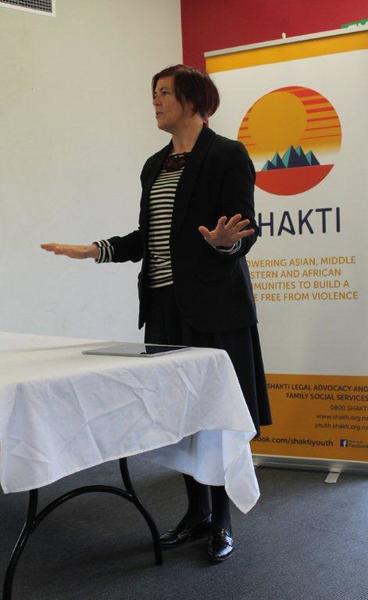 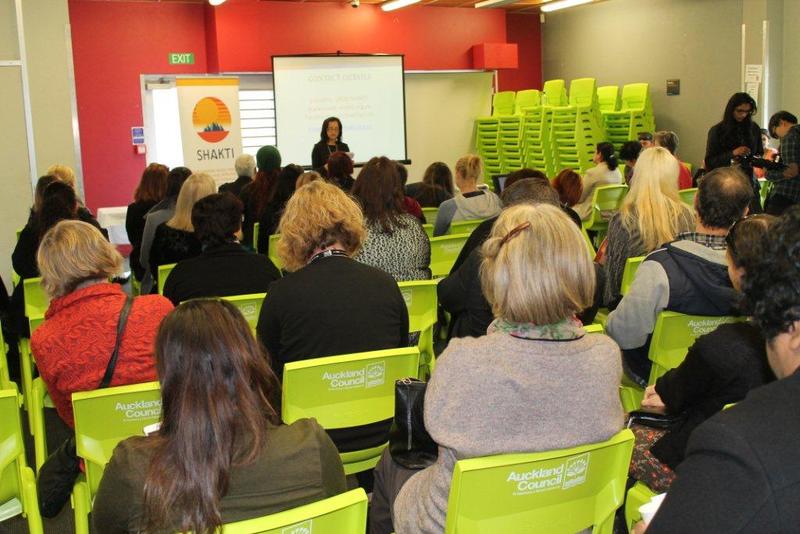 Shakti Women’s Refuge is a national not-for-profit community organisation and our country’s first Ethnic Women’s Refuge. Shakti’s Youth Unit started in 2010 when a group of young people of ethnic origin under 30 (most survivors themselves), decided to raise much needed awareness about children and youth witnessing violence and being the silent sufferers in the home.

The Find Your Voice campaign came about because of Sidra and Rana and launched on the 23 July this year.  Co-ordinator, Mengzhu Fu tells me that it had been 6 months in the preparation. The Youth Unit went to several high schools around Auckland region to gain insight into how ethnic youth felt about domestic violence, or if they had been experiencing this at home and what resources could really help.

There is psychological harm - a lot of children end up blaming themselves for what is happening and think “maybe I did something wrong when things happen between my parents.”

“We did four focus groups in schools around central and South Auckland, with 5 to 8 students in each group (27 students in total) of various ethnicities from Middle Eastern, African and Asian background.”

The response was very positive Mengzhu tells me, "We wanted to get feedback on the resources we were producing. We wanted to make sure they were relevant to them. They were really appreciative for the focus groups, for some it was their first chance to disclose violence happening within their homes. Often they think there is a culture of silence around this."

At the launch Jan Logie (Green Party) reminds the audience that domestic violence affects every community no matter the ethnicity or culture.

Every child deserves the right to be safe.

Jan tells me that it is important not to stigmatize the ethnic community whenever a case of domestic abuse happens. She says that this will exacerbate the reluctance that ethnic youth may already experience and not encourage them to come forward to break the silence in safety.

“New Zealand still has racism. It’s very difficult for minority communities that experience racism to break out and speak out about something negative that’s happening within their community because [they] want to protect their community from that racism. So we need culturally appropriate pathways and organisations to be able to disclose the abuse without damaging the community.”

Jacinda Adern (Labour Party) tells me that around 58,000 refereals are made to Police each year regarding children per year experiencing domestic violence in the home. “There are massive ramifications for the children who witness violence and it’s a double whammy for children from our ethnic minority communities. And what did she think about Rida’s message?

“What a powerful thing to hear from a young woman who has survived such a tragedy, to be willing to stand up to give hope and strength to others; a really courageous young woman.”

During presentations at the launch three sisters from the Pakistani community; Sehar, Mehwish and Sabah from the Shakti Youth Unit are speaking out too, it's the first time for Sabah to do so but her sisters Sehar and Mehwish have been proactive and outspoken for the last three years.

It turns out these three young university students have survived domestic abuse at the hands of their father as well, but they saved themselves by all leaving their father’s home at the age of 13 and 14. They say their courage has been inspired by women like Shakti founders Farida Sultana and Shila Nair, the co-authors of Purple Dandelion.

During Rida’s speech at the launch the silent audience feels the gravity of her words, "I don’t think I’ve actually grieved, I think I am still going through that process ... I just need time to grieve now."

Rida’s hope is what shines through, in spite of the intense trauma of her loss. Her enduring message:

Don’t hide it, don’t be ashamed ... if someone is asking for help, go and help them. You never know, you might change their life for the better. If I can help saves lives that would be a good deed for me.