May the best speaker win 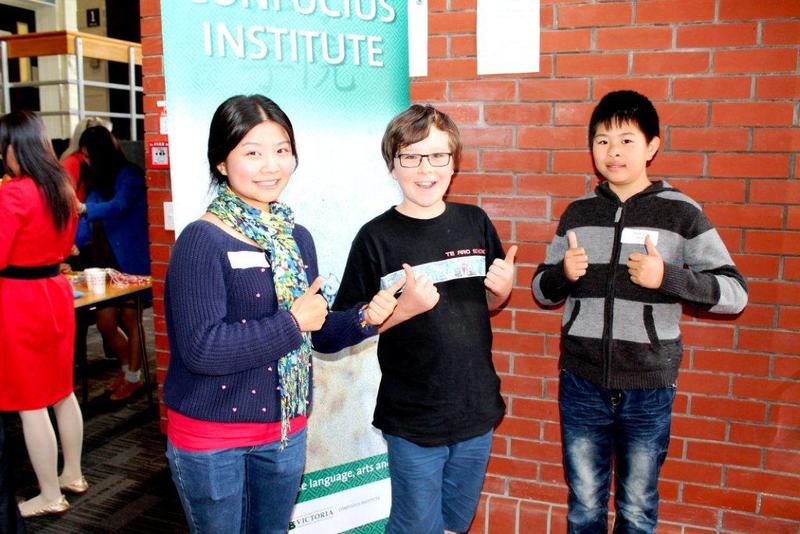 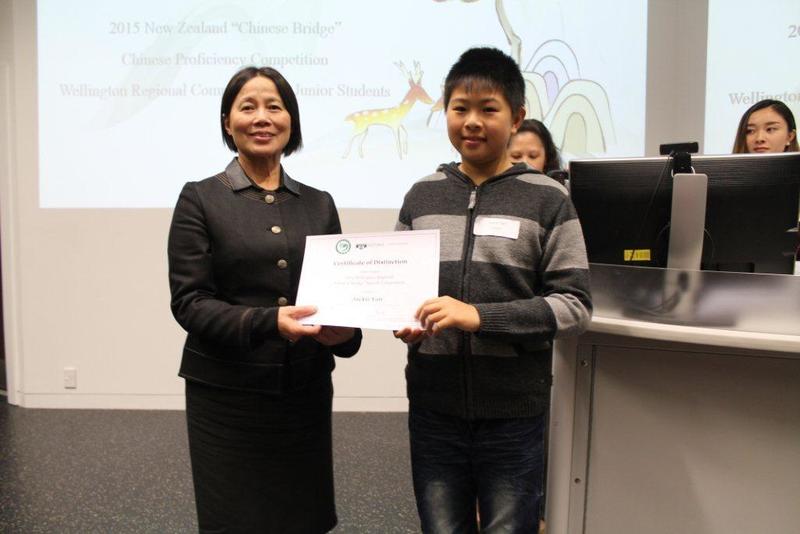 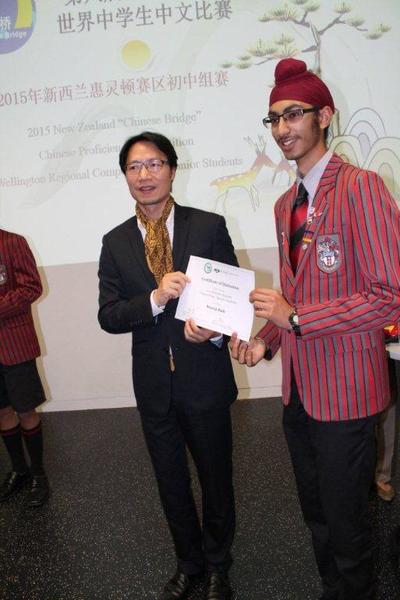 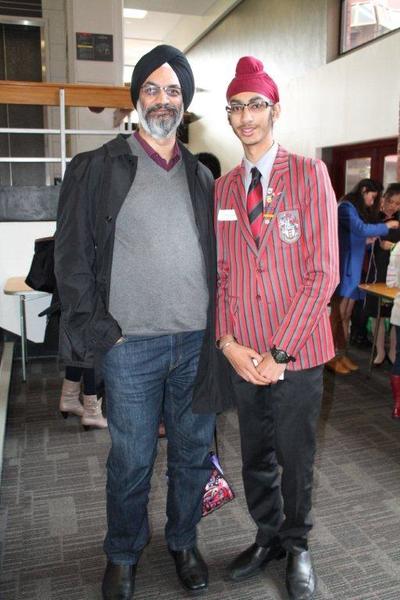 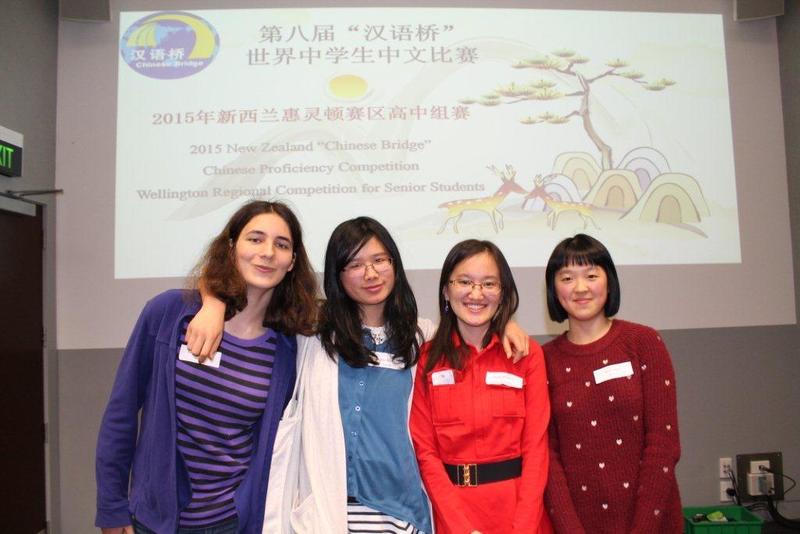 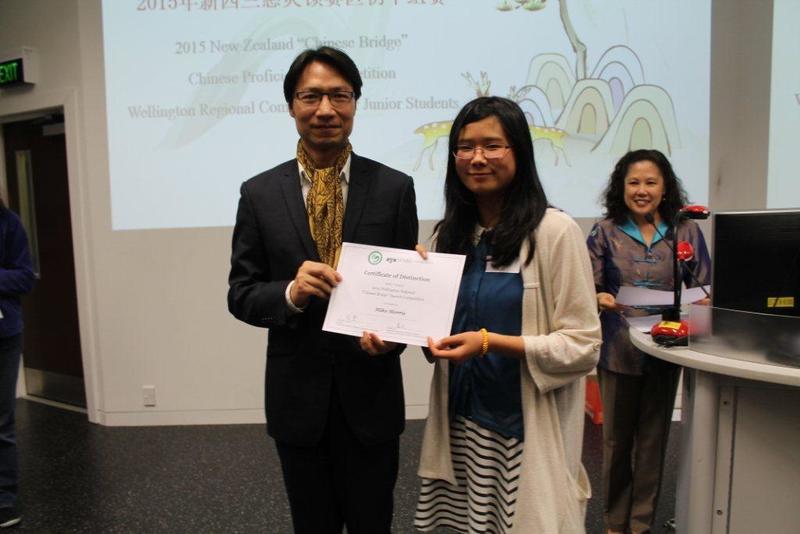 Mika wins a certificate of distinction. 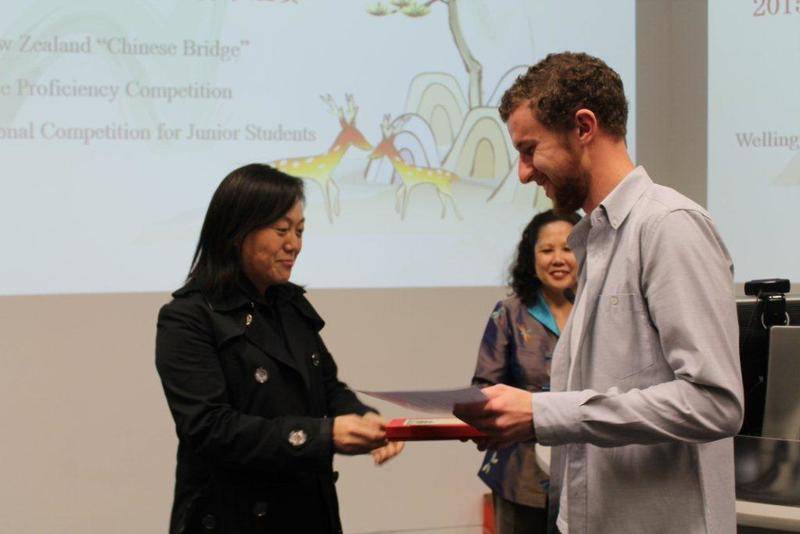 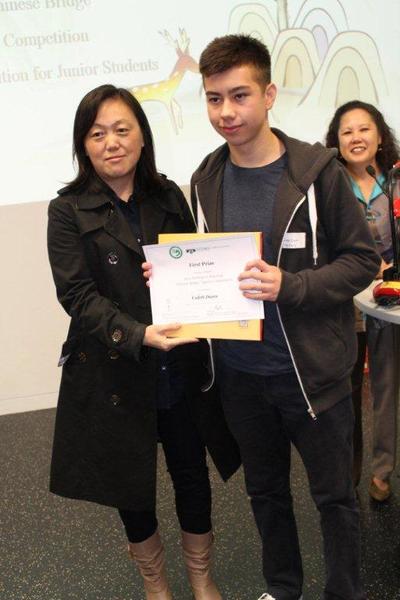 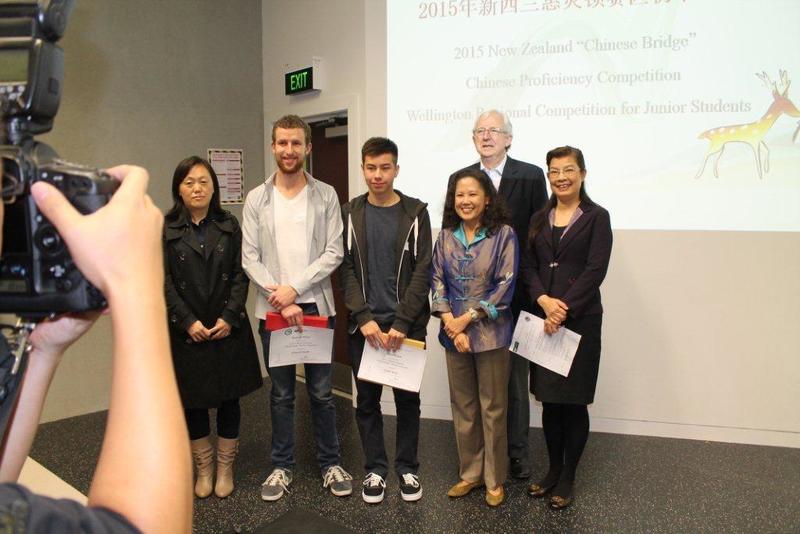 First prize for Caleb Dunn: a trip to China. 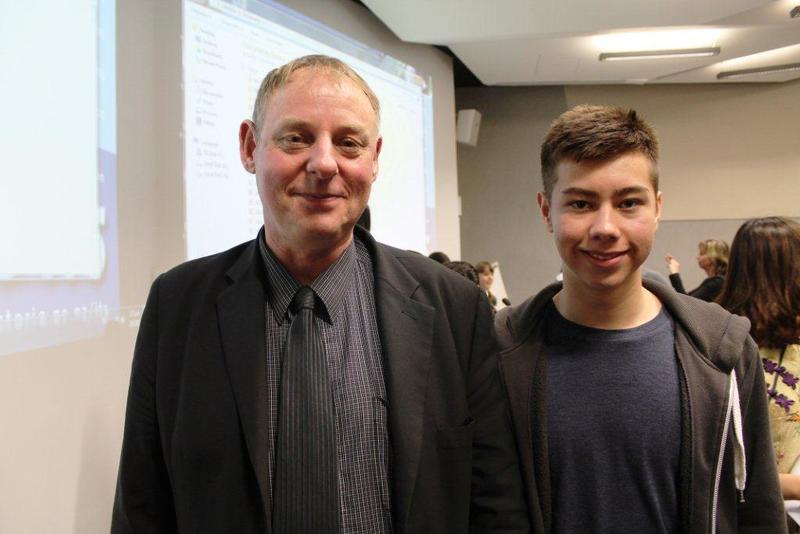 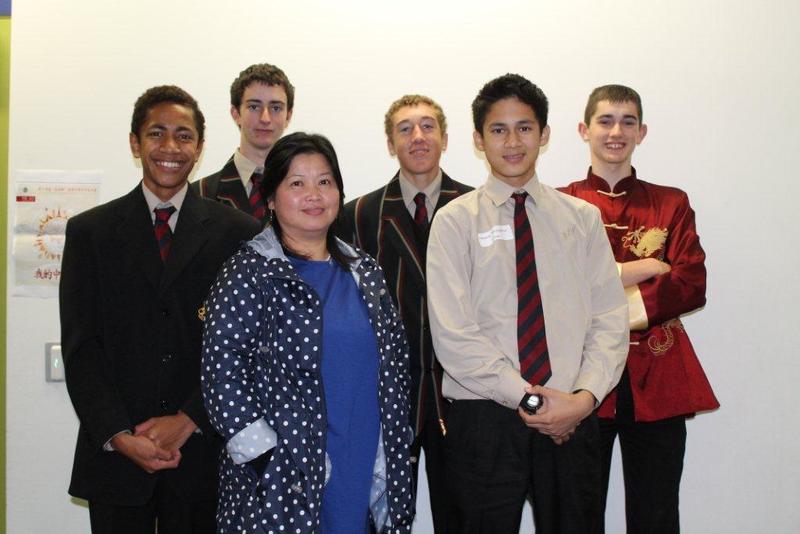 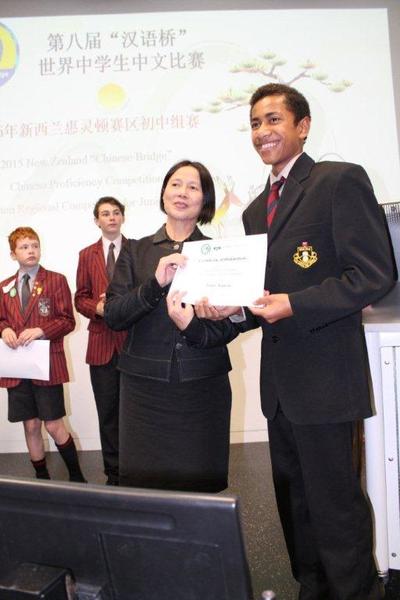 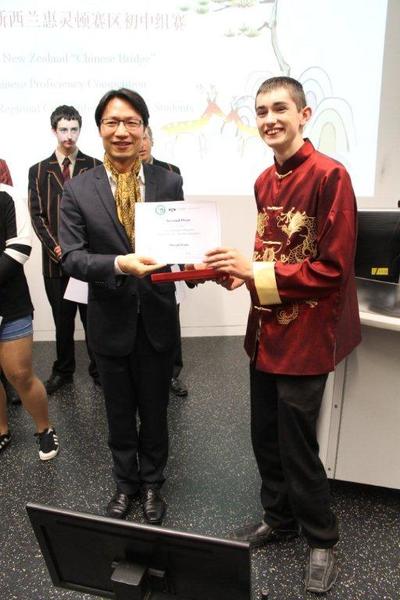 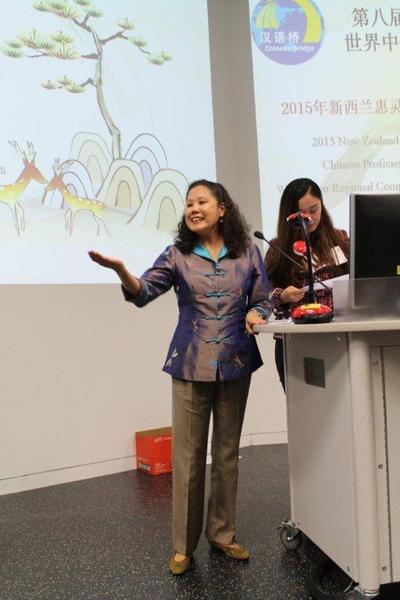 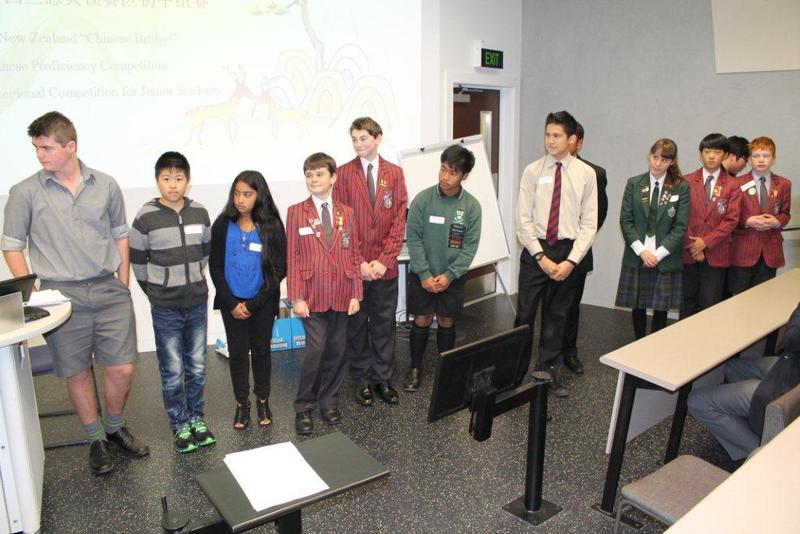 Schools from around North Island competing for nationals. 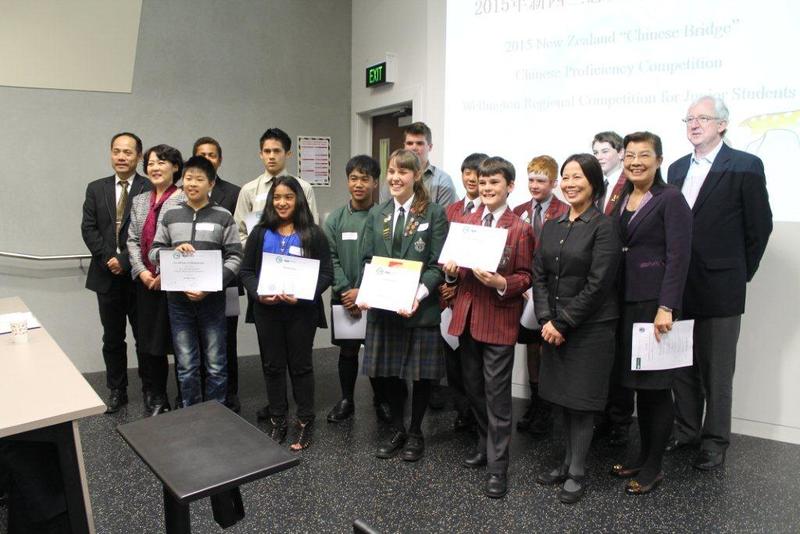 Winners across the North Island. 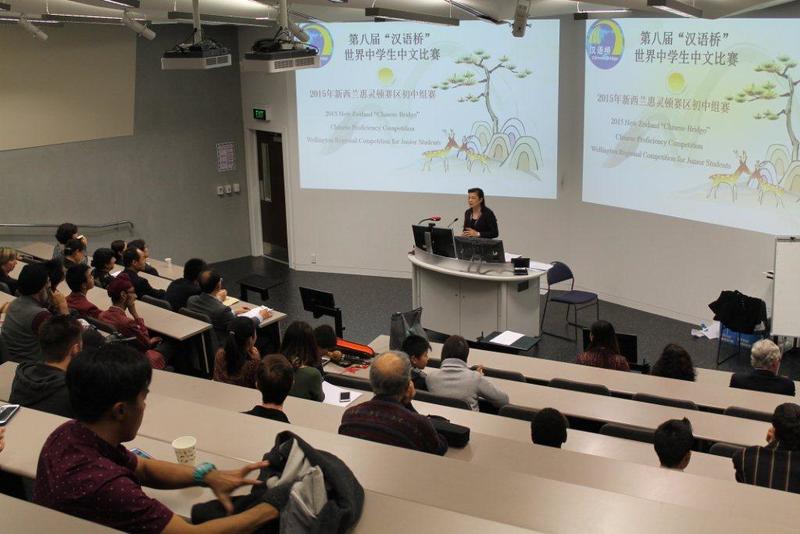 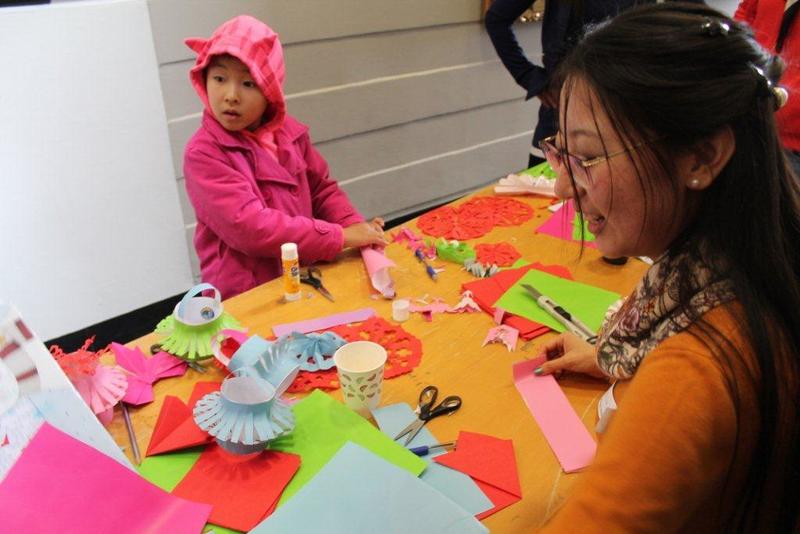 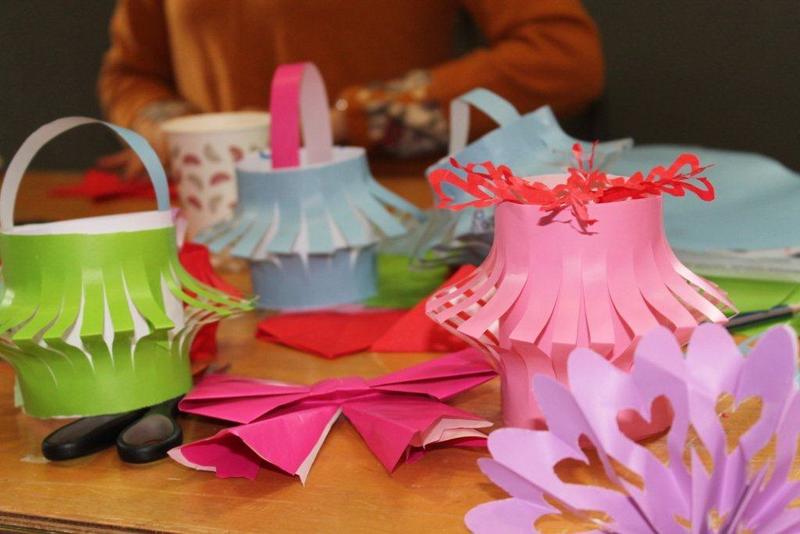 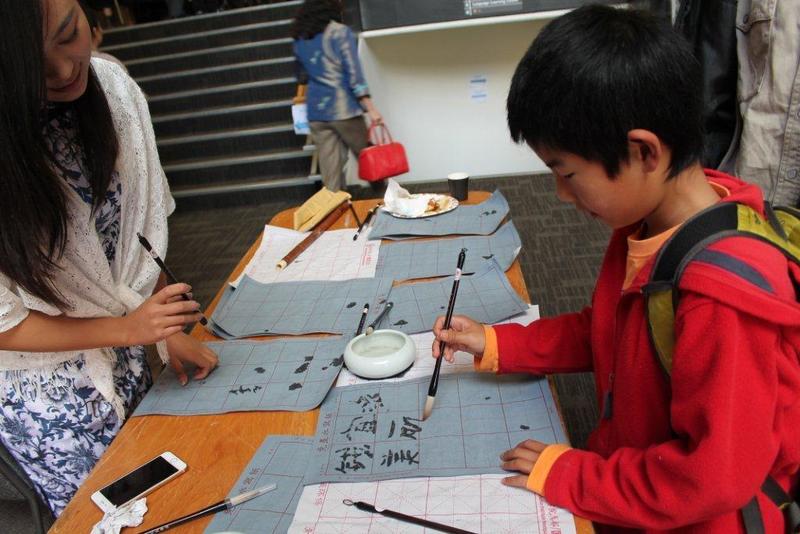 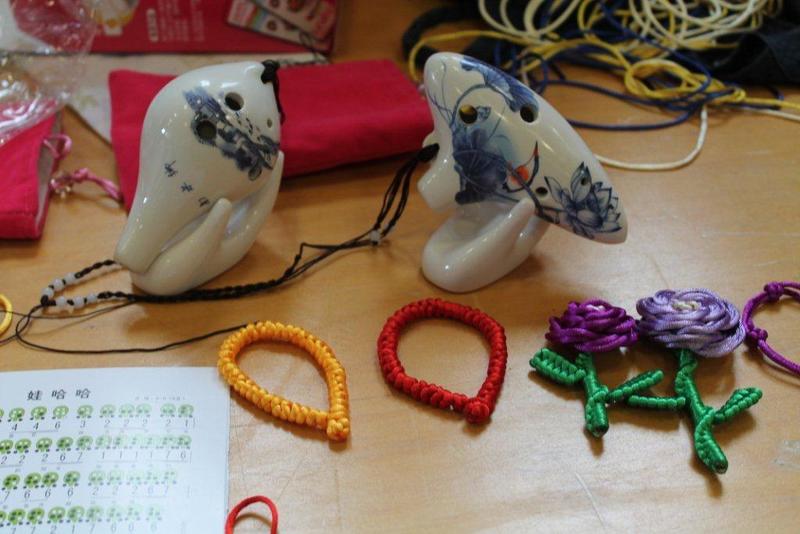 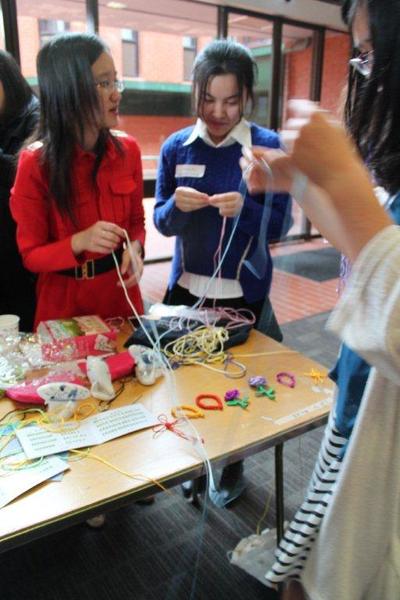 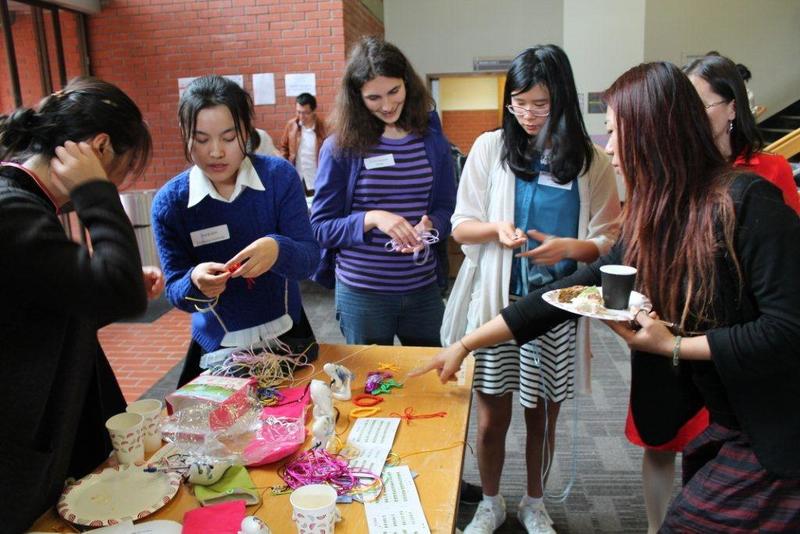 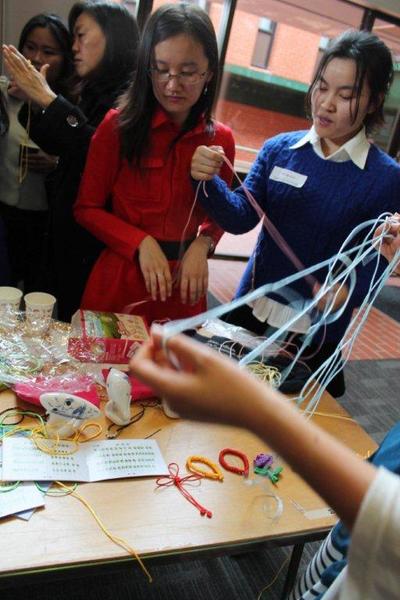 It takes a village to raise a child - African Proverb

Top students from secondary and tertiary institutions are gathering to compete for first place in a speech competition - in Chinese. Lynda Chanwai-Earle meets students from around the North Island to see who has the gift of the bilingual gab at the annual 2015 Wellington Regional 'Chinese Bridge' Speech Competitions.

Victoria University's Hugh MacKenzie building is buzzing with students of all ages and the word on campus is Mandarin. They're practicing their speeches for the annual 2015 Wellington Regional ‘Chinese Bridge’ Speech Competition, organised by the Confucius Institute at Victoria University.

"There was a king who commanded his troops to build The Great Wall of China ..." says 12 year old Jackie Yan from Te Aro Primary School. His speech about the legend behind the building of the Great Wall tells the tragic tale of a woman whose husband is a labourer, who loses his life there. She waits for her husband to return but he never does and her grief is so great she cries for 10 nights and the great wall began to crumble.

Jackie loves to learn Mandarin because he's a Chinese New Zealander. His 12 year old friend Ollie tells me a story about saving the Panda Bear. Yue He is their Mandarin Language Assistant and Chinese teacher. She's very proud of all five Te Aro students who have turned up.

Probably the most surprising element at this speech competition is hearing fluent Mandarin spoken by Year 11 Scotts College student Manraj S. Rahi from Wellington. Manraj is Sikh (and very tall!). In Mandarin he very eloquently describes why he thinks Chinese is an important language to learn.

Manraj thought that learning Chinese would be a good challenge and would help later in life, particularly because he sees China as a growing power in the world of business. He's been studying Chinese for four years now at his secondary school and Manraj sees much in the way of business potential there for the kind of work he would like to follow in the information and technology sector.

Proud dad Gurjit S. Rahi tells me that his multilingual son (Manraj can speak Punjabi, Mandarin and English) is also very entrepreneurial. Manraj has already set up an online "Learning Mandarin" website for newbies like me.

Mika from Wellington East Girls College is Chinese with a Japanese mother and European father. She and her younger brother were adopted from the same orphanage in China. For Mika learning Chinese is about her desire to go back to her birth place. Her whole speech is about her gratitude and love towards her adoptive parents and for people not to judge "families by their looks".

Victoria University student Edward Smith is one of four tertiary competitors. He came second for his speech about making friends with a Chinese stuntman in Beijing. Edward befriended the stuntman after he scored a role as an extra in a feature film - they stayed in contact via the Chinese AP version of wee-chat. Edward's speech in Mandarin is a cautionary tale about not losing friends because of a tenuous connection.

At just 15 Caleb Dunn is the youngest university student I've met. Most of his education takes place at Wellington College, but Caleb is advanced enough in Chinese to be studying this language at Victoria University.

His speech is about his visit to Nepal and Tibet with his mother Pamela Dunn, the former Deputy Head of Mission at the New Zealand Embassy in Beijing. Caleb essentially grew up in China while his parents worked there.

The content of Caleb's speech in Chinese is poignant; he reflects on the cultural differences between Nepal, Tibet and Beijing. He muses on these experiences; about flying over Mount Everest, seeing it rise magnificently above the clouds, about visiting the temples and villages and needing portable oxygen tanks to cope with altitude sickness. It's also about how he was shaken by the news of the recent earthquake in Nepal. Caleb is shocked because his visit, only a couple of years ago, is so fresh on his mind.

His speech ends with his heartbreak at the devastation after the earthquake. He tells the audience his thoughts are with the Nepalese people and the villagers he met.

His father Ross Dunn is proud of Caleb's achievement. Ross explains that it takes a village to raise a child, in this case Caleb has had a lot of tuition in mandarin and a head-start with all his years growing up in China, however the content of Caleb's speech is his own creation and told from the heart.

Perhaps not surprisingly Caleb won the first prize trip to China, back to his second home. Will Dad accompany him this time? "Yes," says Ross, "wouldn't miss it for the world."