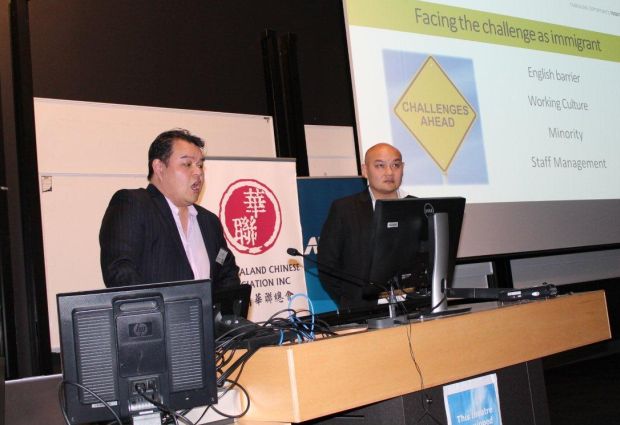 The Chow Brothers, infamous for their rags to riches life as property magnates and brothel owners made news during their on-going court battles with their competitors in the sex industry.

They also polarised their own NZ Chinese community when invited to speak at a National conference, many critics boycotting the conference altogether. Others saw their rags to riches story as successful business entrepreneurship.

Do the ends justify the means? And what would their mother think? Lynda Chanwai-Earle attends the conference in Auckland to hear from the critics and the Chow Brothers themselves.

There was a definite stir in the auditorium at the 2014 Going Bananas Conference as a significant group of participants walked out. Many of the group were among the most respected members of the New Zealand Chinese community. This doesn't include the many members who had boycotted the conference altogether.

This was a clear indication of their displeasure at the inclusion of the Chow Brothers as guest speakers at the conference, invited as examples of successful business entrepreneurs within the New Zealand Chinese community and regarded as; "High Flying Bananas".

Among those included in the high flyers session was the internationally renowned chef Anthony Hoy Fong. A quick note of clarification for our audience; a 'banana' is a self-directed ironic nickname given to our diasporic Chinese New Zealand community (by the community) to mean "yellow on the outside and white on the inside".

It’s a rag to riches story for John and Michael, known as the Chow brothers. Hong Kong was home to the Chow family until they immigrated to the Hutt Valley, Wellington in 1984 - John was 13 and Michael 8.

With little English, John and Michael worked in their parents take away shop, eventually taking over the family business. With profits they bought their first commercial property. They survived early business failure by trying something new; the sex industry. 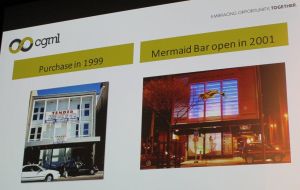 Their first empty property became the Mermaid Bar, adult entertainment club. Now they are listed in the NBR as our wealthiest, described as brothel barons and property magnates.

But high profile court battles between the Chow Empire and their rivals in the sex industry – the owners of the Calendar Girls and notoriety around the demolishment of historic buildings has bought the Chow brothers controversy.

Do the ends justify the means? After their session at the conference I asked the Chow brothers and the divided Chinese community for their thoughts, starting with elder brother John Chow.

How do you feel about the way you are portrayed in our mainstream media?

"I don't think we're special targets but they [mainstream media] sell papers. The majority of our sex worker are European. I use that to my advantage."

How do you feel about the polarisation among the New Zealand Chinese community over your inclusion at this conference?

"We accept that the sex business is what we are, not everyone loves us but this is who we are and we do it successfully."

What about the concerns raised over your business practice - ethics around safe work place for your sex workers?

"We take full responsibility for our sex workers. We provide a safe environment for our working girls. The New Zealand Prostitutes Collective wrote us a letter of support."

I then asked Michael Chow, if you were both Pakeha or European do you think you would have divided the public so much?

"I think we get more attention [ethnics in business aside], but negative publicity is good publicity - our hit rate went up on our facebook site."

David Wong chaired the High Flying Bananas session at the conference. He tells me that the Chow brothers invitation caused polarisation and boycotts, but he felt the Chow Brothers were being unfairly targeted as visible minority businessmen:

"I feel they have a good story to tell, we are focusing on their business acumen and rags to riches story, not just focusing on the entertainment side." 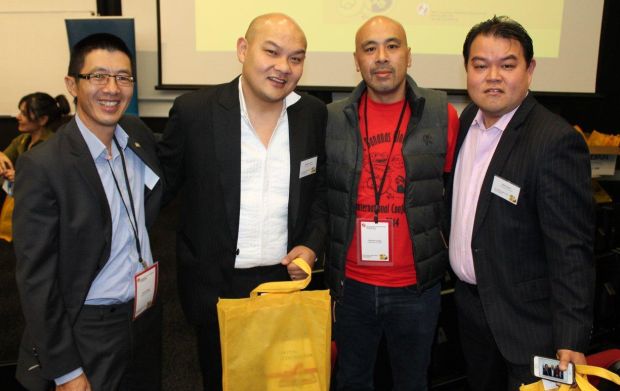 But what about their controversial business ethics? Does the ends justify the means? David told me he stepped back to look at their overall contribution and their balance sheets. David pointed out that only 10% of their revenue is through the sex industry and that property makes up 90% of the Chow Group's business empire:

"We at the New Zealand Chinese Association wanted to hear their story ourselves. We had to balance their invitation against polarising our participants. There is diversity in every business."

Two highly respected members of the New Zealand Chinese community; Lynette Shum and Esther Fung both attended the conference but Esther walked out at the start of the Chow Brothers session. She questions the justification of the Chows as business role models.

"To be open is not necessary to be honest. Certain things were inappropriate about their presence and what they stand for. The sex industry may be voluntary but I'm quite mindful that it's not considered a desirable occupation for people to have to resort to."

Lynette Shum was the only audience member who stayed to ask the hard question about the Chow Brothers controversial business ethics, a pointed but necessary question. An audible gasp was heard among the audience at Lynette's audacity but afterwards many members congratulated her for being brave enough to ask.

Things like respect for heritage buildings, building consents and health and safety regulations form part of [good] business ethnics. They didn't address that. It seemed to me that the [Chow Brothers] were quite disdainful of that concept.

Esther and Lynette were both disturbed by how the Chow Brothers were sold to the conference; their rags to riches story, the laudatory nature of the publicity around their success and their guest speaking roles as "high flyers" within the New Zealand Chinese community.

I'm not critical of the conference organisers but sadly this one inclusion is unfortunate; its the silent majority that speaks within the community. There are plenty of other examples of successful rags to riches stories amongst our community that would have been more appropriate.

However the presence of Chow Brothers created opportunity for dialogue and debate amongst the Chinese community - is this not a good thing? Esther answers:

It's a difficult one, yes, they created debate and by sitting there and saying nothing, is not debating.

And the Chow Brother's "secret of success"? According to their presentation: Adding Value, Timing, Cashflow, Brotherhood.