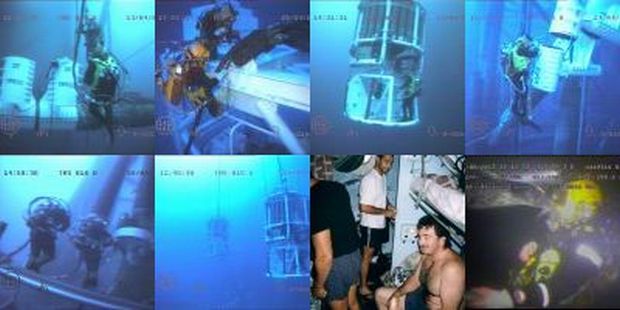 Saturation divers at work and at rest in the hyperbaric chamber. Images sent via satellite hence the low resolution. Photos courtesy Chris Fabish

There's a lot of talk about waking up one day and you can't stand up because your bones have turned to chalk. There's been a study done in the North Sea. They've debunked it as a myth. I've been in saturation with guys in their mid-sixties and they've been at it for 30 to 40 years and they're fit as a 20 year old. - Chris Fabish, Saturation Diver 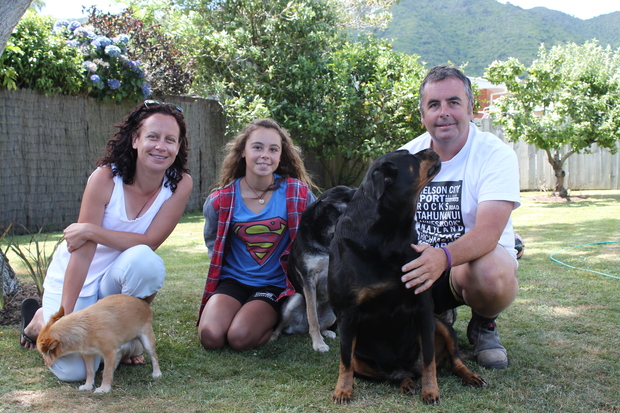 Chris Fabish, wife Bonny and 13 year old daughter Sammy relax in the back-yard at their home in Waikanae (with their three beloved dogs). Its a gorgeous hot summer day; the birds are singing, the neighbors kids are squabbling and the only thing on everyone's mind is whether to go for a spearfishing trip to Kapiti Island that weekend. They're all mad about diving in this family (that is everyone except Bonny - too claustrophobic!).

Sammy tells me that her dad's job involves a lot of travel abroad. Sammy loves having her dad at home (lots of ice-cream and treats) and Bonny is very relieved to have her husband back, probably because Chris doesn't have just any ordinary old job in an office. Chris is an aquanaut.

It takes 2 days for astronauts to return to earth but aquanauts can take up to two weeks to be brought back to the surface during decompression. Most of us probably take transport for granted, forgetting a very select group of saturation divers, working under the most extreme conditions to maintain the deep-sea oil wells and pipelines to bring us this fossil-fuel.

This is idyllic down-time, Chris has 28 days off with his family. Chris has deserved his time off. He's just spent a couple of months in the Arabian Sea; 28 days with no sunlight, living at depths of anywhere up to 200m (600ft), working on those deep-sea oil wells around the globe. Chris used to be a fireman, then he took up commercial diving and loved it. Now he's a saturation diver. He tells me that the money is really good. It makes this extreme kind of job worth it.

For aquanauts the sea-floor, diving bells and the hyperbaric chambers aboard the ships are home for 28 days. Chris will spend 28 days under saturation breathing Heliox because normal air is toxic at such depths (effects of oxygen toxicity and nitrogen narcosis). A mixture of mostly helium and a little oxygen is used. The deeper they go, the less oxygen they need. It’s no more than 28 days because by the end of this stretch Chris will become anemic and lethargic with the lack of oxygen in his bloodstream.

Did we mention the squeaky voice? Helium changes the pitch of the voice and the deeper they go, the more squeakier the voice gets (like Donald Duck on speed). Sometimes Bonny just can't understand a word her husband says at all when he calls home from the phone on board the hyperbaric chamber.

Chris tells me that the multi-billion dollar oil companies he works for regard saturation diving safety as paramount. Saturation divers work in teams of 3, requiring two on the sea bottom and one safety diver in the diving-bell on stand-by. They all have constant communication to the ship at the surface. The huge DVS or diving support vessels are purpose built, with as many as three hyperbaric chambers aboard, a diving bell and a moon-pool (a well in the centre of the ship). It's absolute high-tech, satelite and computer driven, manned by a crew of around 160. They're all there just for the elite team of saturation divers numbering less than 20:

We work in saturation diving teams where one is on the sea floor while the other is resting in the chambers. It's a floating construction site. It's 24-seven, 365 days a year. The DSV costs hundreds of thousands a day to send us down. They don't like down time.

Is it always cold and dark down there?

No, some places like the Arabian Sea are quite light and blue. The last big contract I was on was in Azerbaijan. We were down to 196m. There it is dark, all you can see is from the torch on your hat. Very, very cold. Different areas around the world have different water temperatures and depths and clarity.

What about the sea life? Big fish checking you out?

Yeah I've come across whale sharks, we had those in Qatar. Huge, huge stingrays [manta rays], even a visit from some seals at 196m. One of them popped his head up into the diving bell and breathed some helium. His voice went all squeaky.

And your first time ever saturation diving? What was that like?

I was on a construction barge and I was really nervous. Living in the chambers was all new to me. You hop in the bell and its just a maze of valves and switches and equipment. It can be quite overpowering. But as soon as your out of the bell and on the sea-bed working it's just the same as air-diving. So I just hopped out and spend the next 6 hours with a sledge hammer banging away at a flange.

Other side effects of heliox? Chris tells me that body temperature cools, it's harder to keep warm. Food also goes cold quickly. Everything gets sent to the divers through a medi-lock by the crew serving them. What about other senses? What about taste?

Food is tasteless at depth. We end up putting a lot of pepper and sauces on our food and we eat quickly. Sometimes it's like pigs at a trough!

You must be relieved at the end of your 28 day stretch, when you get to go home?

The thing I enjoy is when you first get out of the chambers, going up on the heli-deck – where the helicopters land and just walking around in the sun. On a day like this, there’s nothing like it. Then we're on the next helicopter and we're off. I miss the girls, I can't wait to see my family! 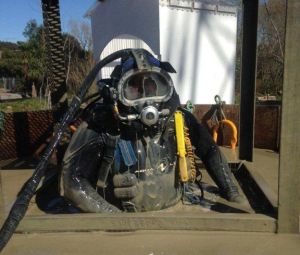