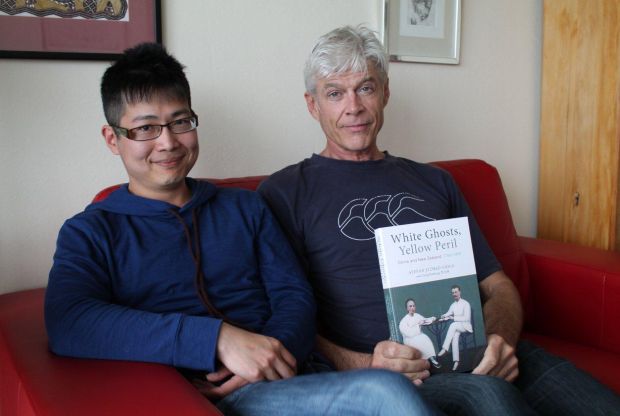 It's important to balance truthfulness with an appreciation of the hardship that people live through but on the other hand it's also important not to let 'respect' distort history.  Zeng Dazheng, co-author White Ghosts, Yellow Peril (Otago University Press, 2014)

There was deep hatred between rivaling Chinese gold-miners in New Zealand, conflict over resources back home in Guandong. When people look outside New Zealand for other cultures, its almost always to look at China. - Stevan Eldred-Grigg, co-author White Ghosts, Yellow Peril

China and New Zealand's relationship dates back as far as 1790 but little is known about this period of our history. Some very surprising and not always savory facts are now revealed about the last two centuries of our connection in the new non-fiction publication White Ghosts, Yellow Peril - China and New Zealand 1790 - 1950.

Stevan Eldred-Grigg used to be Zeng Dazheng's history lecturer at Victoria University, they've been friends ever since. Over a decade ago in 2002 Zeng originally left his birth city of Xiamen, a coastal city in Fujian province to study politics here. Zeng's people are a mixture of Hokien and other ethnic groups. Now an academic himself Zeng leapt at the opportunity to co-write White Ghosts, Yellow Peril.

When I met with both writers in Wellington I wanted to know what their personal motivations were, firstly to write this publication and secondly why they collaborated on this book.

This new publication is described as the first history book ever to explore all sides of the relationship between China and New Zealand spanning first contact during the Qing empire in 1790, to the 'post-liberation' of Mao Zedong's China of the 1950s.  Both writers didn't want to present a sanitised version of China and New Zealand's history - this was their main critique of other historical accounts to date. Stevan tells me that the focus has been on Chinese that have 'done well', not those who failed. There was also no mention of the Haka, an ethnic group based in Southern China, and vicious hostilities between Haka and Cantonese created rivalry between the groups when they first came to New Zealand as gold miners in the nineteenth century.

An award winning author and teacher at Victoria University, Stevan Eldred-Grigg describes himself as social historian and novelist. He tells me that he begins with ideas, people and stories, he sees himself as someone who constructs stories out of personal histories.

After initiating the publication Stevan quickly realised he needed a collaborator, but not just simply a translator of Chinese texts. Stevan needed another like-minded writer who understood the vast histories of both China and New Zealand over a two hundred year stretch and the socio-political environments of the times.

Zeng was the perfect collaborative research partner. Zeng tells me that Stevan did all the hard work creating the history and narrative sweep of the book. Zeng saw his contribution in the 'coloring' of the text, not just being able to research Chinese language texts and translate but also a 'logician's ability' to thoroughly test Stevan's concepts, giving a deeper context to this history book.

Stevan tells me he has always been fascinated by China. After studying the Qing Dynasty at university his first visit came about in 1984, to the huge city of Guangzhou (the city at the centre of White Ghosts, Yellow Peril). Sounds of shuffling feet and jingling bicycles, in an atmosphere filled with coal smoke, Guangzhou struck him as a kind of industrial city of Europe a hundred years ago. It was locked in a kind of time-warp. Stevan suffered profound culture shock. Stevan tells me that during the 1800's Guangzhou was the 3rd largest city in the world and one of the wealthiest with its steel and silk mills. Guangzhou was China's key trading city with the rest of the globe.

Stevan reflects that the publication is book-ended, starting in 1790 as the first point of contact between countries with the fur-seal, silk and tea trade. There was a huge demand for New Zealand's baby fur-seal skins back in China, among the well-to-do.

The book ends in 1950 with the establishment of the People's Republic. 1850 to 1950 were two periods of massive suffering for the Chinese. Two huge catastrophes killed around 20 to 30 million people, from the Taiping Rebellion of the 1850's through to the 'Great Leap Forward' that led to mass starvation and poverty during Mao's reign in 1950.

The biggest challenge for Zeng was self-censorship. Zeng was concerned that by reflecting unsavory and realistic facts in the book, he and Stevan might bring about a back-lash of racist reaction against Chinese. Zeng struggled not to let 'respect' for the hardships of early Chinese gold-miners and sojourners to New Zealand sanitise their re-telling of history. Truthfulness was paramount for both writers.

White Ghosts, Yellow Peril is a riveting history book, one that's not afraid to openly debate concepts of race relations, diplomacy, government and war, debates that are just as pertinent today given our close trading ties with China at present.