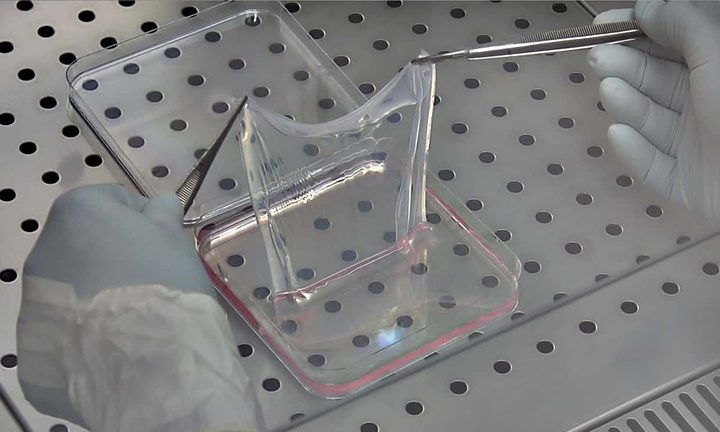 A team of scientists has used gene therapy to grow a replacement skin for a young boy suffering from a rare genetic disorder.

The boy was seven years old when he was admitted to University Children's Hospital, Ruhr-University in Bochum, Germany, in 2015 with severe complications of junctional epidemolysis bullosa. The condition causes skin to be very fragile as surface layers, called the epidermis, are not connected properly to the deep layer of the skin, or the dermis.

"Very trivial injuries and abrasions turn into horrible ulcers that don't heal very well," explains Dr Chris Smith from The Naked Scientists. "You get scarring and it's exquisitely painful and of course you're at great susceptibility to infection with organisms like staphylococcus aureus ," Dr Smith says.

The boy had turned up to hospital with around 80 percent of his skin missing. He was given morphine to cope with the pain as doctors were preparing to start palliative care after all conventional treatments had failed, including a skin transplant from his father. As a last resort, the team at Ruhr-University sought the help of Italian scientists who had pioneered a technique to regenerate healthy skin in the laboratory.

The experimental and unprecedented case saw the scientists not only attempt to replace the boy's skin, but also treat the genetic cause underpinning his problems. To do that, the team sourced a 4cm-squared piece of skin from the boy's groin, and from this sample they gathered skin stem cells or keratinocytes. Using a harmless retrovirus, they then introduced healthy copies of the defective gene into these keratinocytes.

Having fixed the gene problem, the team then grew the skin stem cells to produce nearly a square metre of skin. The skin was grown in sheets, and was layered onto the boy over a two or three month period, completely replacing almost all of the skin on his boy like a patchwork quilt.

"This is a remarkable piece of work and it brings together stem cell biology and gene therapy rolled together to save someone's life," Dr Smith says. "They appear to have cured this boy and grown him a new skin at the same time."

The landmark case has recently been reported in the journal Nature, two years after the successful completion of the skin grafting. In that time the boy has returned to school, and even joined a football team. His skin repairs normally if injured, he does not need to take any medication, and the team has so far detected no adverse consequences from the gene therapy he underwent.