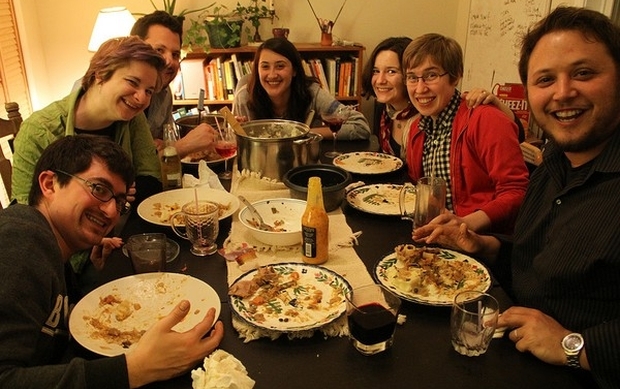 United Noshes is a dinner club with a difference. It's the idea of a couple in Oregon who are running a series of 194 dinner parties, one for each member of the United Nations, in alphabetical order.

They started in July 2011 in a tiny apartment in Brooklyn with Afghanistan. Since then a mix of friends and strangers have sampled the delights, and some challenging dishes, from places like Guatemala, Djibouti, Estonia, Jordan and Indonesia.

Next up is Lesotho, and after that they hit the halfway mark with Libya. That means they should get to Zambia and Zimbabwe sometime in 2019, after a culinary journey lasting about 8 years!

Jesse Friedman of United Noshes told This Way Up's Simon Morton that it can be tough to find a single meal that can represent an entire country, just as finding dishes for tiny nations can be tricky.

But Mr Friedman says it's been a great way of meeting people and exploring local food markets on the hunt for new ingredients.

"You do have to compromise with some things...but in general most of the ingredients you can find. You know most cultures are cooking with onions and garlic and there's this core set of ingredients that's pretty common throughout. In terms of the cooking itself there have definitely been some challenges....but I'm kind of starting to get the knack of it!"