The Science Of... Vitamin C

What is vitamin C and why do we need it? Which foods have the most vitamin C? Should we pop pills when we think we’re getting a cold, or are we just producing expensive urine? And can vitamin C really cure cancer, or is it all hype? Alison Ballance and Simon Morton are on the case.

Vitamin C – what you need to know

Vitamin C is at the hub of almost every biological function that we know. Prof Margreet Vissers

Strawberries (80 mg/cup) and honeydew melon (86 mg/cup) are also high in vitamin C – there’s a delicious vit C fruit salad to be made with all these fruits.

Bananas, apples, carrots and spinach, on the other hand, are all low in vitamin C. 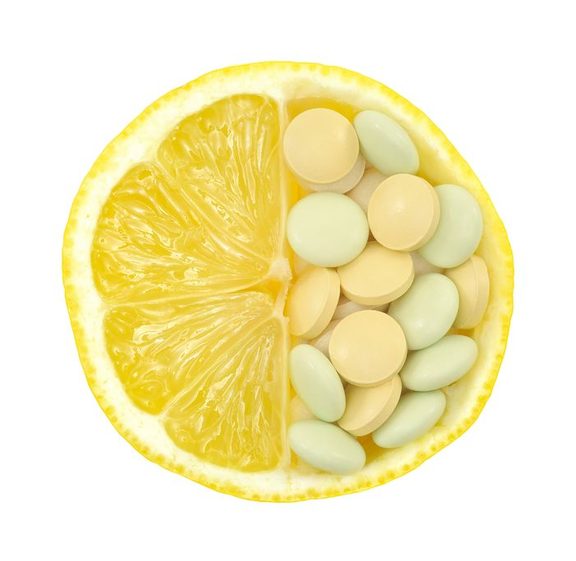 Supplement versus food? There is no difference in the quality of vitamin C you get from a pill or food.

The scientists we spoke to say there is no need to pop a pill if you eat a healthy diet, including at least 5 servings of fruit and vegetables a day.

But they advise taking a supplement if you’re getting a cold, as it may shorten the duration of the cold and will stop it developing into pneumonia. Our bodies get rid of vitamin C very quickly, so maybe take small doses of vitamin C often. 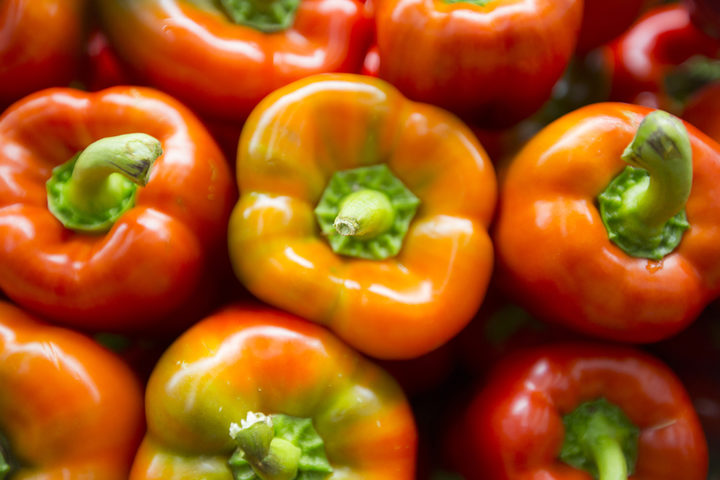 We’ve known for hundreds of years that if you don’t eat enough fresh fruit and vegetables –especially citrus fruit such as oranges and lemons – you will get scurvy and die.

Thousands of sailors died on long ocean voyages until, in the late 1700s, ship captains such as Captain James Cook began taking lemon and lime juice, as well as sauerkraut, on board – and cases of scurvy plummeted.

Surprisingly, there are still cases of scurvy reported in New Zealand today – and in a recent study in low income areas of the United States, 12 percent of people were on the verge of scurvy.

Ascorbic acid is a vitamin because it’s a vital molecule that we don’t make ourselves, so we need to get it from food.

It wasn’t until the early twentieth century that the mysterious molecule that prevents scurvy was identified and named ascorbic acid, which means ‘anti scurvy.’ Ascorbate is another form of vitamin C. 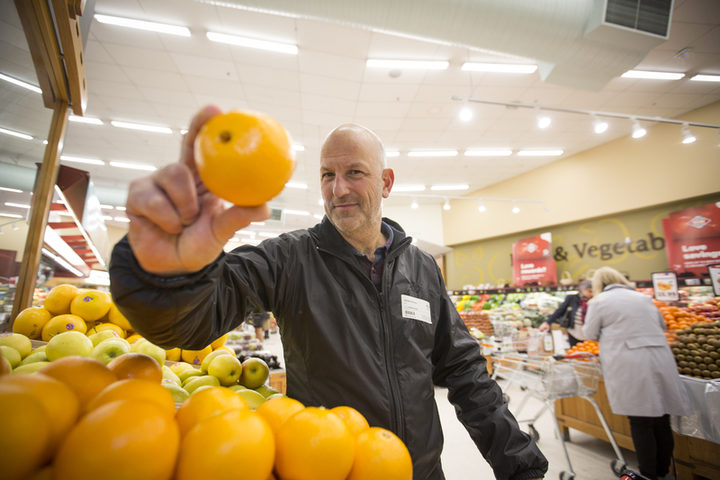 Vitamin C in our body

Our bodies are very efficient at using vitamin C.

“There are specific vitamin C transporters that line our entire intestine,” says Professor Margreet Vissers, from the Free Radical Research Centre at the University of Otago, Christchurch.

“They take up all the vitamin C from our food and transport it into our bloodstream. All the cells in our body have their own transporters, and they take vitamin C from the blood and concentrate it in the cells.”

Margreet explains that the level of vitamin C is very tightly regulated by our kidneys, and each time our blood passes through our kidneys they grab all the vitamin C and recycle it back into circulation. This happens until our blood reaches saturation, which is when it contains about 100 micromolars of vitamin C. Once this level is reached, any excess is vitamin C is excreted as urine.

Basically, our body is very good at holding onto vitamin C, but once we have enough then we just pee it out.

Margreet describes the process as being like a sponge – a dry sponge will soak up water until it is saturated, when it won’t absorb any more.

“If your tissues are depleted, then your tissues will absorb all that vitamin C and your blood level won’t rise until your tissues have enough and they stop taking it up,” she says. “Once your blood reaches a hundred micomolars any excess is excreted. That’s the scenario we think is the optimum for good health.”

Why vitamin C is important

Vitamin C is an important antioxidant, which helps counteract the effects of damaging free radicals.

In the 1960s researchers discovered that vitamin C plays a key role in the collagen enzyme; collagen is a key component of our skin.

Since then it has been found to be an important co-factor in 70-80 other key enzyme processes.

“These enzymes all have different functions,” says Margreet, “and they cover a whole raft of biological activities, from the growth of blood vessels through to the regulation of our genetic code. Vitamin C is at the hub of almost every biological function that we know.” 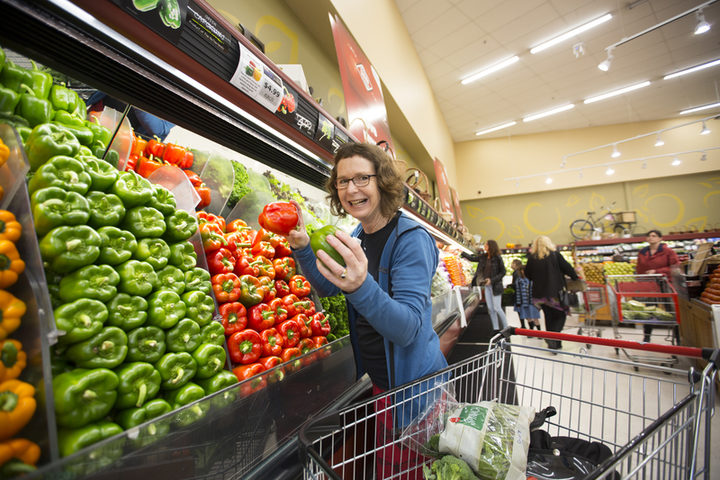 How much you need and what are the best sources

The recommended daily intake (RDI) for New Zealand is very low, at just 45 mg of vitamin C a day. However, scientists such as Margreet, as well as the New Zealand Ministry of Health, recommend that a fit, healthy person should aim to eat 200 mg a day to reach optimum blood saturation.

The Ministry of Health puts out eating and activity guidelines, which is evidence-based advice for doctors to help people eat healthily.

It recommends four fruits and four vegetables as good sources of Vitamin C. To find out how good they are, we used the New Zealand Food Composition tables, which are prepared by Plant and Food Research, as the definitive guide relating specifically to New Zealand food.

We found that 6 of the 8 recommended foods are excellent, but were surprised at how low the remaining two are.

We also found that red capsicums are very high in vitamin C (240 mg), while orange juice and blackcurrants are also excellent sources. 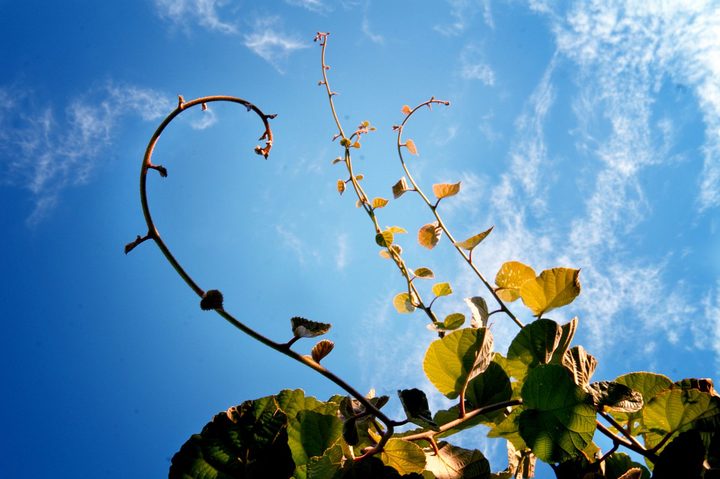 Plants, such as this kiwifruit vine, produce most of their vitamin C in their leaves. Photo: CC BY 2.0 Victoria/Flickr

Plants produce vitamin C from glucose. Most plants use the l-galactose pathway, which is a 10-step pathway that takes place in all the cells.

Different enzymes are involved at each step of the pathway. It is only recently that the whole pathway has been understood, and scientists from Plant and Food Research were involved in identifying two key enzymes and their genes.

Dr Sean Bulley from Plant and Food Research says that plants produce most of their vitamin C in their leaves, where its antioxidant function underpins the process of photosynthesis.

“When you’ve got lots of energy flying in and hitting the leaf, you get reactive oxygen species and these can be very damaging,” says Sean.

He points out that these are also important in the plant, and he says that vitamin C plays another key role in ensuring that the levels are well controlled.

Dr William Laing says there are biochemical pathways that recycle vitamin C so it can keep working, and that levels of vitamin C in a leaf are up to ten times higher than in other parts of the plant.

Most fruits or tubers, such as apples and potatoes, contain only small amounts of vitamin C, although some fruits – such as kiwifruit - contain very high levels.

William says that plant and food research scientists are looking to breed super kiwifruit with very high vitamin C levels. Such fruit already exist, but "although they contain 800 mg of vitamin C they are very bland and hairy."

The researchers have identified the genes involved in high vitamin C and will use this knowledge to speed up the breeding programme to produce kiwifruit that are very high in vitamin C, which also taste good and store well. 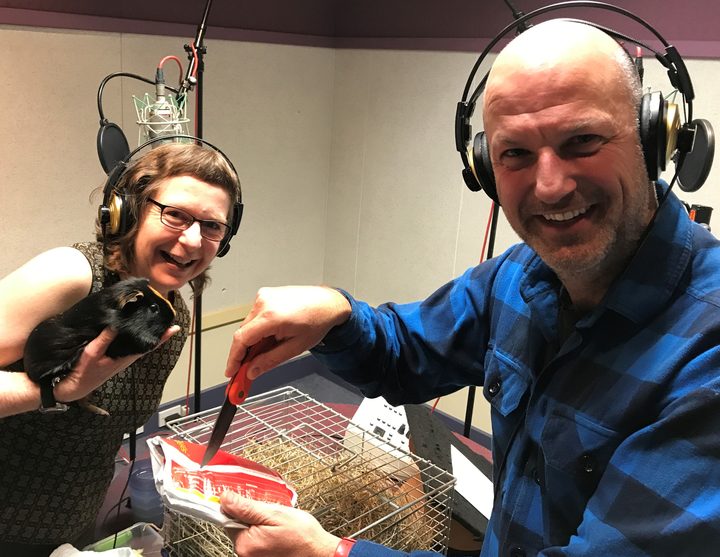 Alison Ballance and Squeak the guinea pig watch as Simon Morton opens half a kilogram of vitamin C that he bought online. Photo: RNZ / Richard Scott

Many kinds of animals produce vitamin C in their kidney or liver. Animals use a different pathway to plants.

The ancestor of humans lost the ability to make their own vitamin C more than 60 million years ago, with a mutation in the gene that controls the final enzyme step. Lemurs can still produce vitamin C, but all other primates and monkeys can’t.

Other groups of animal have more recent mutations in the same gene, including some birds, bats, guinea pigs and bony fish – so a shark can make vitamin C but a goldfish can’t.

These random genetic mutations persisted because there was no disadvantage, as all the animals involved could get sufficient vitamin C from their diet. 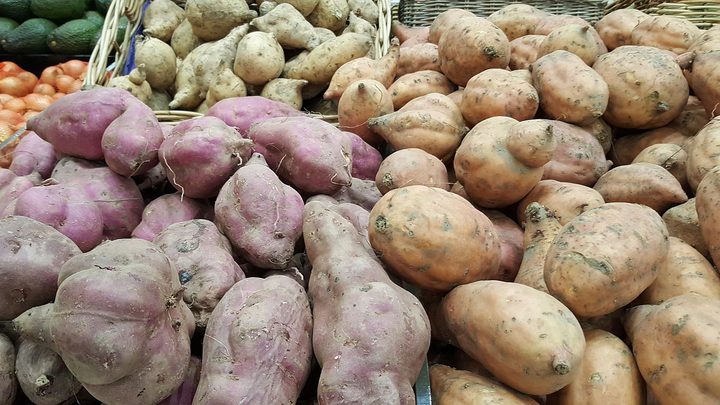 Vitamin C and the common cold

The Cochrane Library has carried out a meta-analysis of all studies looking at the impact of taking supplements on the common cold. The results show that if you take regular Vitamin C supplements you’ll get the same number of colds - although they won’t last quite as long.

But there was also a small number of studies where people exposed to short periods of extreme physical stress (including marathon runners and skiers) took vitamin C, and it halved their risk of getting a cold.

The Cochrane Report also says that if you take high doses of vitamin C after you already have symptoms there’s no consistent effect on the duration or severity of common cold symptoms.

However, Dr Anitra Carr from the Free Radical Research Centre at the University of Otago in Christchurch says many of the trials were poorly designed, and did not measure the levels of vitamin C in people before the studies began.

Margreet Vissers recommends that people take a supplement of about 1 gram a day if they’re getting a cold, as she says it may shorten the duration of the cold and will stop it developing into pneumonia. 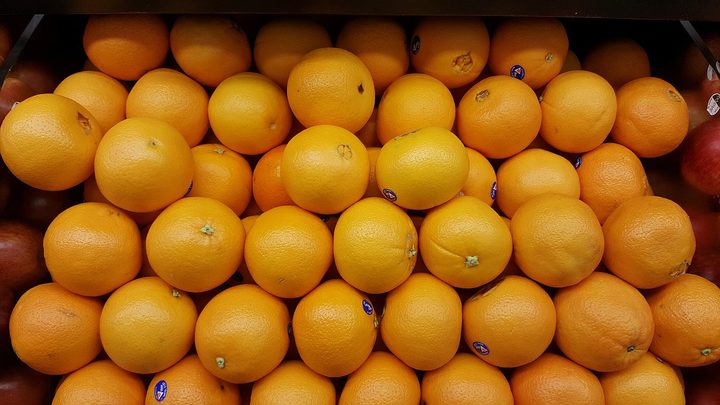 “If you measure the vitamin C levels in people on admission to hospital for any reason whatsoever they all come in on the verge of scurvy,” says Margreet.

“A number of people die from pneumonia. Those deaths are preventable by giving vitamin C to those patients, as are deaths from other acute trauma injuries including burns patients.

“So your body is undergoing a massive battle - the more ill you are, the harder your body is having to fight to maintain you alive. And vitamin C is involved in so many processes in your body that you’re basically not giving it a fighting chance [if your levels are low].”

Anitra is currently leading a trial at Christchurch Hospital to treat sepsis patients in intensive care with 10-20 gram doses of vitamin C.

Associate Professor Gabi Dachs from the University of Otago in Christchurch is leading research at Christchurch Hospital investigating the role of vitamin C in cancer tumours.

So far she has found an interesting association between high levels of vitamin C in the blood and in tumours, especially in colorectal cancer. As well, patients with more vitamin C in their tumours tended to have less aggressive forms of cancer.

Gabi says that despite early work by Linus Pauling in the 1970s, which popularised the idea that ultra-high doses (100 grams) of intravenous vitamin C would cure cancer, there is still no evidence that vitamin C cures cancer. However, there is a lot of research currently under way. 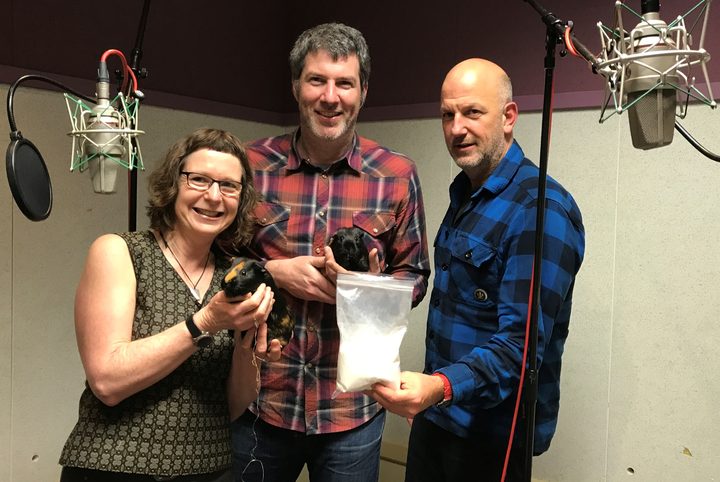 The Science of... Vitamin C was made by Alison Ballance, Richard Scott and Simon Morton, with help from Bubble and Squeak the guinea pigs. Photo: RNZ / William Saunders

The Science Of ... Vitamin C is a collaboration between This Way Up and Our Changing World
Presenters: Alison Ballance and Simon Morton
Producer: Richard Scott
Executive producer: Tim Watkin
Music: Bevan Smith 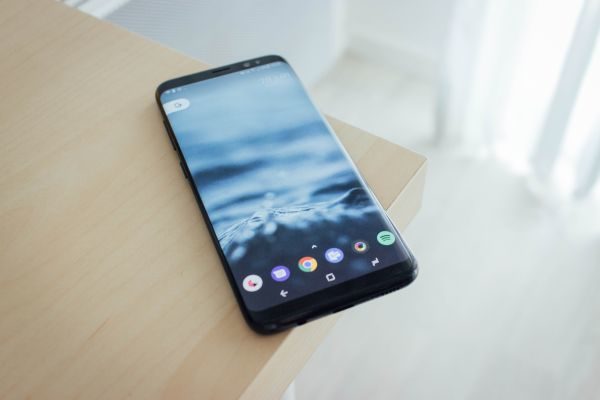 This week, internet users' worries about 'fake news' are revealed in a new survey (with Peter finding a homegrown example).

And Samsung tries to put its exploding battery woes behind it with September's launch of another big smartphone, the Galaxy Note 8.

Peter Griffin has the latest from the world of technology.

How to Spot Fake News. FactCheck.org article by Eugene Kiely and Lori Robertson 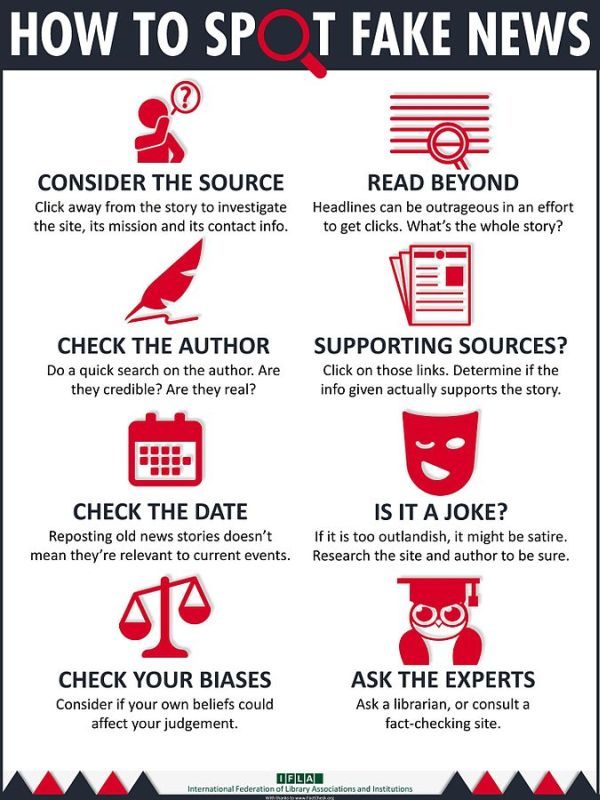