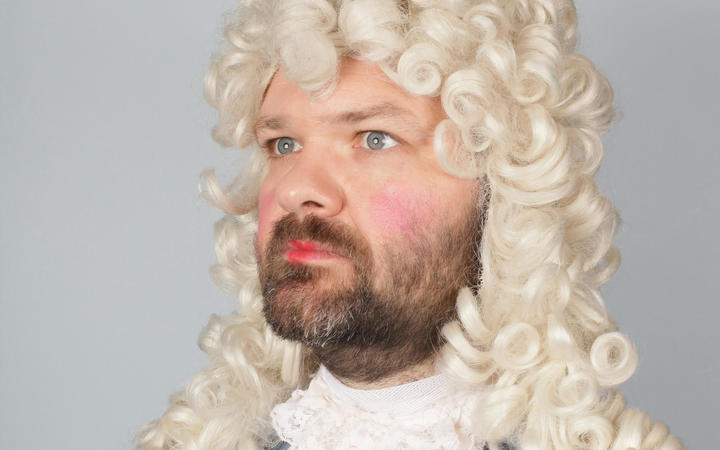 New Zealanders aren’t the only people to use humour to deflate anything too serious, but it maybe creeps into our music more than most. The new album from Luke Buda contains the kind of great song craft you’d expect from a stalwart musician, and its share of serious moments. But, as you might expect if you’ve encountered him before, there are plenty of smiles along the way.

Going by his music, interviews, and the artwork for this album, which sees him decked out in a Victorian wig and makeup, Buda is the most irreverent member of his band the Phoenix Foundation.

It’s a bold move on ‘Candy’ to include a deep pitched-down voice saying "sweet sweet candy", as well as a possible nod to Homer Simpson. But it works, and it’s funny, and one of many moments through this new solo album, simply called Buda, that seems to say ‘don’t worry, you don’t need to take this too seriously’. The song is already pretty jovial, coasting along on a kind of ‘Slice of Heaven’ era Dobbyn feel. Notably it was co-written with his Phoenix Foundation collaborators Sam Scott and Conrad Wedde.

‘Here Comes The Wind’ meanwhile is one of three tracks here with lyrics by author and poet Damian Wilkins, which I was surprised to find out given how well he emulates Buda’s good-natured style. There’s a bit of the bluster of Buda’s second album Vesuvius in that song, but by and large this album hews closer to the eighties keyboard inflections of his first, Special Surprise.

In typically relaxed fashion he said he recorded most of the album in his garage, with input from the acclaimed likes of Don McGlashan, Joe Lindsey and Toby Laing from Fat Freddy’s Drop, Riki Gooch, and Anita Clarke from Motte, who sings on every track. A notable contribution from her comes on the track ‘My Naked Body’, where Buda correctly assesses that "whoa it’s trippy being a human", going on to say "every single morning gotta face yourself", at which point Clarke responds "and it’s not much fun".

In an interview with Wellington Music Buda said "It seems I am obsessed with feeling tired, fat and old, and therefore that is what the songs seem to be about. Hopefully in a mostly entertaining way as opposed to a depressing way…"

I think that’s the exact line he’s found, and I have to say hearing songs about going through middle age is extremely refreshing, particularly ones this relatable and well-written.

The theme continues on the self-explanatory ‘I’m a Bit Out of Shape’. When Buda sings "that don’t mean I’m giving up. It’s gonna take a lot more than high cholesterol level", I found it touching, and uplifting, perhaps despite his intentions. The drama and hushed tones of the music certainly help.

It’s always interesting to hear a member of a songwriting team separated from his collaborators, and here Luke Buda distinguishes himself with songs as good as that of his main gig, and with the same loving attention given to sonics. Maybe it’s to be expected that Buda feels more personal, and playful than a Phoenix Foundation album. It’s more emotional than I anticipated, but it also consistently made me smile. 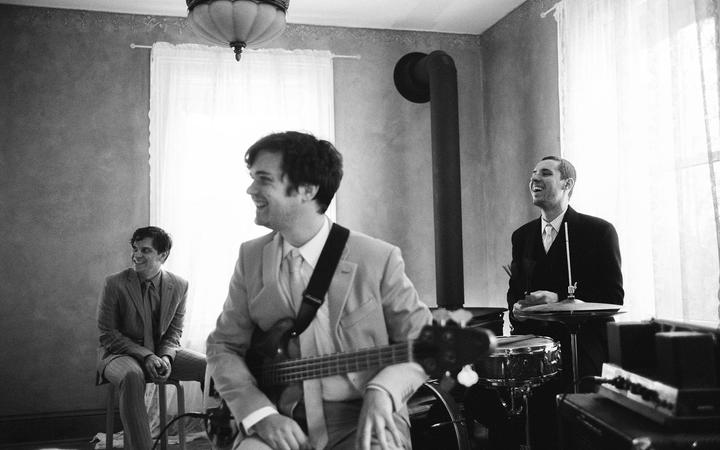 Canadian instrumental group BADBADNOTGOOD released their first album ten years ago, filling out its runtime with covers of hip hop tracks by the likes of Nas and Slum Village. They repeated the same trick on its followup, and went on to produce tracks for rappers like Kenrick Lamar, Danny Brown and more, including an entire album with the Wu Tang Clan’s Ghostface Killah.

They're are a jazz band, and always have been, but their name comes up in conjunction with hip hop a lot, for obvious reasons. Their new sixth album Talk Memory is the most purely 'jazz' thing they’ve done, but they still find time for plenty of sonic innovation.

It’s notable that this is BADBADNOTGOOD’s first album in five years - around half the band’s lifespan. One of their founding members, Matthew Tavares, left in 2016, leaving bass player Chester Hansen to incorporate keyboards into his repertoire. Alexander Sowinski handles drums and percussion, and Leland Whitty who joined in 2016 supplies soprano and tenor saxophone as well as a range of other instruments.

The album is based around in-studio improvisations, which presumably enhanced the 'jazz' of it all. There are moments throughout where the band steps out of the way and lets a member take centre stage, as on 'Signal from the Noise', when Hansen takes to his distorted bass and proceeds to shred.

The band also brought in some notable guests, like ambient musician Laraaji, who adds electric zither to the track ‘Unfolding’, which keeps cycling through lightning-fast arpeggios, over which Whitty gives his saxophone a workout.

Five tracks feature string arrangements by the legendary Brazilian composer Arthur Verocai, who made a similar appearance on the recent Hiatus Kaiyote album. On these songs a horde of violins, cellos and violas tend to speak as one voice, like the tumbling central melody on ‘City of Mirrors’.

In the PR for this album, the band are described as "going back to their roots". It also refers to music as "a conversation", which I like. For the layperson, improvisatory music can sound impenetrable. On Talk Memory, BADBADNOTGOOD create a nostalgic, inviting space, trading hip hop influences for big daubs of melody, and leaving plenty of room for the band members to flex. 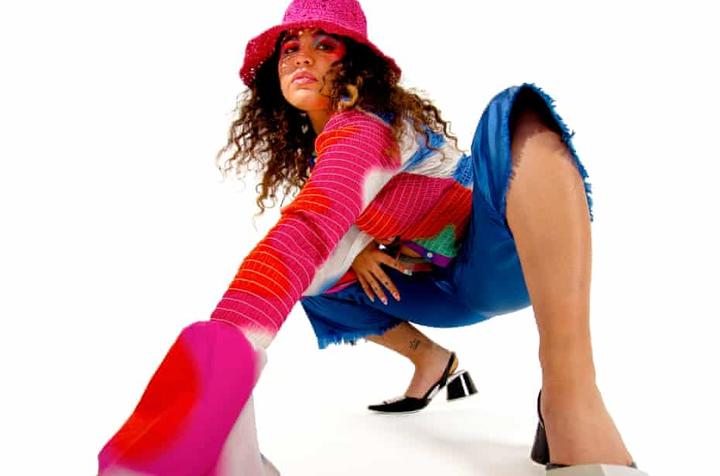 In the recent documentary Under the Volcano, there’s a snapshot of Elton John and band recording on the Caribbean island of Montserrat in the 1980s. Sitting on the mixing desk is what looks suspiciously like a huge mound of cocaine.

I feel like the pop world has shrunk considerably since then. There are still vast sums of money involved, but the internet has had a demystifying effect on pop stardom, and it’s also made a lot of the music being made by Gen Z feel more personal and esoteric than what came before it.

As an example, compare what any pop star was doing ten or twenty years ago to the new major label album by Californian musician Remi Wolf, and you might be surprised how fearless and bursting with ideas it is by comparison.

Remi Wolf has had quite the life so far. She started skiing aged eight, and wound up competing in the Junior Olympics twice before quitting age sixteen. She appeared as a contestant on American Idol in 2014, released her debut EP in 2019, and checked into rehab for alcoholism a year later. She’s now sober at age twenty five, and has put out her debut album Juno on Island EMI Records.

Wolf’s music gets categorised as bedroom pop, and I think the lack of studio pressure is what I was alluding to in my intro. The New York Times compared her to Arlo Parks, and Beabadoobee, but Benee is a better reference point. Wolf has also been tagged as  funk-pop, and there’s definitely that type of energy through the whole album - not just in its moments of chicken scratch guitar or honking bass, but her stream of conscious lyrics and restless energy vocal-wise. She’s made no secret of her love for the Red Hot Chili Peppers’ Anthony Keidis, which I was surprised by initially, but the more you listen, the more it makes sense.

On tracks like ‘Sexy Villain’ her pristine upper register butts up against her slightly coarser speaking voice, which comes close to rapping, and her free-associated lyrics namedrop Bob De Niro, Angelina Jolie and Billy Bob Thorton, and the TV show Euphoria. The repetition of ‘tip tip tippee toe’ is one of the many seemingly off-the-cuff moments that make me surprised this is on a major label. I know pop music has always had moments of irreverence, but here those moments come thick and fast. There are also plenty of feel-good hooks, and for me the best of those appears in the double-time ‘Buzz Me In’.

Wolf co-produced Juno with Jared Solomon, and like her lyrics the music is crammed with ideas. On ‘Quiet On Set’ that results in something very close to what Pharrell’s production duo The Neptunes were doing around ten years ago, its curious guitar riff offset by a rhythmic hip hop strut.

For something made in the shadow of addiction, this album is consistently silly. But then again, Remi Wolf is only twenty five. I want her to be silly. When NME asked her if she was a rule-breaker, she said “I don’t know what I’m doing! I’m always striving for everything to be a hook but was never consciously like ‘I am going to rewrite the rules’”.

I think that quest for hooks is what gives this album its dizzying energy; exuberant, youthful, and always catchy.