Tony Stamp is impressed by Halsey’s mix of pop and industrial, luxuriates in new soundscapes courtesy of Fat Freddy’s Drop, and swings his hips to two-thirds-Kiwi Berlin-based band No Romance.

If I Can’t Have Love, I Want Power by Halsey 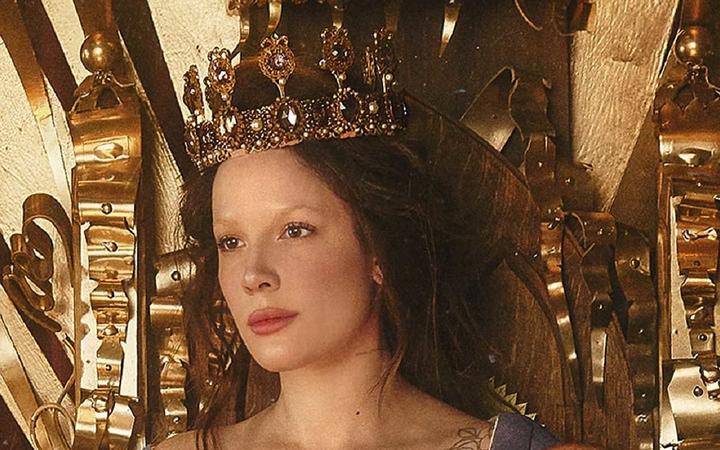 This week saw the long-awaited release of a new Kanye West album, an artist who’s become synonymous with ambition and ego. We don’t really have time to go into Kanye’s whole thing right now, but a comparison could be made between him and another pop star with a new record on virtual shelves. They can actually boast more followers on Spotify than West, and to announce their new album, released a fifteen-minute video that saw them wandering the Metropolitan Museum of Art, only to reveal a portrait… of them. At first, this seemed like extreme hubris, but then I listened to the album, which is co-produced by an alt-rock legend… and I started to be won over.

To give some idea of Halsey's success, her songs have been streamed six billion times in the USA alone. This is their fourth album If I Can’t Have Love I Want Power, and as that title suggests, it’s extravagant, headstrong, and a complete change of sound. That's due in part to its producers Trent Reznor and Atticus Ross.

Reznor is the man behind industrial legends Nine Inch Nails, and in collaboration with Ross has become an Academy Award-winning composer. I’ve seen people suggest that working with Halsey could be their entry point into the pop world, but Reznor’s been making pop from the start - just a very noisy kind of pop.

I should say here that it was Halsey’s decision to work with these guys, and from what I can tell they wrote the songs first before handing them over for Reznor and Ross to rework. Halsey has used the word ‘horror’ to describe these songs and chose appropriate people to realise that vision. She is the architect of this album.

But if you’re a long time fan of Nine Inch Nails like I am, you’ll notice the record is littered with Reznor’s signifiers. Tracks end with plodding basslines and whirlwinds of low-passed guitars, or implode into distortion; there are descending synth tones throughout, plenty of major sevenths, and so on.

Reznor is someone who can’t help but leave his own stamp on whatever he works on. Even the score to Soul - a kid’s movie - sounded unmistakably like him. The melding of Halsey’s pop instincts with Reznor and Ross’s favouring of dissonance stays interesting for most of the album, and in some tracks works seamlessly.

Halsey is twenty-six, and being a public figure, brings a lot of her own mythology to the album. She uses she/ they pronouns, is a white-presenting Black woman, and has spoken publicly about previously miscarrying. They’re bisexual but in a relationship with a man who she has a child with - they were pregnant during the making of this record, and she’s said IICHLIWP is a concept album about the joys and horrors of pregnancy and childbirth. There’s also an accompanying movie that sees them playing a Victorian-era queen.

That’s just part of the story, and it’s already a lot to unpack. But I admire the fact that she’s channelled all this into the work, and the music is better for it. It’s wildly ambitious, but not frivolous - she has points to make.

‘Girl Is A Gun’ is a great, self-explanatory name for a song, and features one the album's poppiest vocals, subverted slightly by its backing of the kind of frenetic drill n bass backing that Trent Reznor and David Bowie briefly flirted with in the nineties. The album is eclectic in the extreme - there’s an acoustic ballad that could almost be Taylor Swift, ambient synth tones with no rhythm, and on ‘Honey’, what almost sounds like a lost track by The Cure (that song features another nineties icon bashing the drum skins - Dave Grohl).

Halsey has said they’re actually happier than they have been in years, it was just the right time to make this challenging, sometimes dirgey record. Her choice of collaborators reminded me of Taylor Swift working with Aaron Dessner from The National, drawing his fans to her in the process, but this feels like a much bigger swing.

The album’s best song features the kind of self-deification that Kanye West has also dabbled in, and naming a song ‘I Am Not A Woman, I’m A God’ is going even further than Lorde’s line about being a ‘prettier Jesus’. But again it feels like there’s a point being made, about pronouns, and pregnancy, and being a very public figure.

The fact that it’s backed by a mid-tempo industrial stomp just means that, for someone like me, it goes down that much smoother. 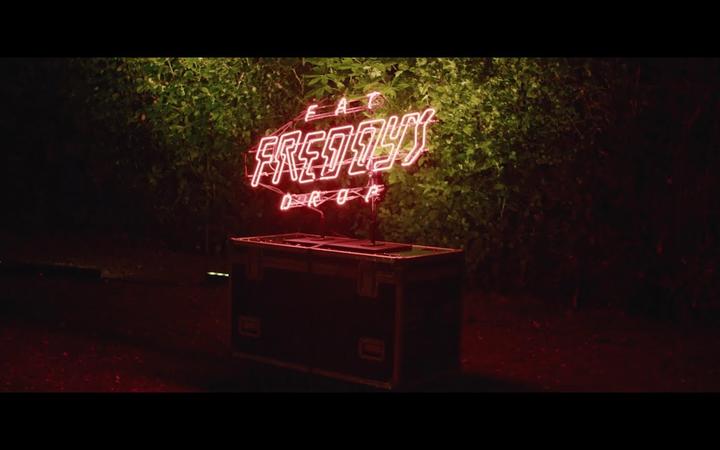 I have to admit that reviewing a new album by Fat Freddy’s Drop feels like a unique challenge. At this point, the band is woven into the fabric of our culture, and it’s hard to know what to say about them delivering another set of great tracks.

It’s especially tricky given the average length of their songs - on the new album Wairunga that's around eight minutes, and to get the proper effect you need to bathe in their full duration.

But I also think that’s easy to take for granted - these are songs that you want to keep going… and going. Imagine the skill required to write something like that. There’s also the number of moving parts involved, with every player chiming in at just the right moment.

The hi-hat shuffle and synth bass gurgle on 'Leave Your Window Open' are sounds I’m more than happy to listen to for ten minutes. They’re both courtesy of Chris Faiumu AKA DJ Fitchie, with Ned Ngatai’s guitar, Hohepa, Chopper Reeds and Tony Chang’s horn section and Kuki Blaze’s keys bobbing in and out. Then there is of course Dallas Tamaira AKA Joe Dukie and his buttery voice, fond of repetition and slogans - and again, I think that’s by design - anything too wordy would throw off the equilibrium.

When I reviewed the band Womb a while back I said their songs feel like pop music in slow motion, and there’s an element of that here too - listen to the bass on opener ‘Coffee Black’, and the way it sits on one note before moving to the next - creating anticipation and satisfaction in a way you want to keep happening.

Wairunga was recorded by the band on a grass tennis court surrounded by bush, with an arsenal of audio and video recording devices - you can watch the album unfold on youtube, the band performing through rainfall as day turns to night. Freddy’s songs often feel like spontaneous jams, a meeting of digital technology with very human performance, and this process enhances that, as does the inter-band chatter that finishes each track.

A lot of NZ bands have dabbled in a similar musical gene pool over the years, but no one sounds quite like Fat Freddy’s Drop.  On the last track ‘Dig Deep’, the dub techno aspect of their sound takes centre stage, augmented as always with a splash of roots and jazz. All these years on it’s still a unique, compelling concoction.

Unfold by No Romance 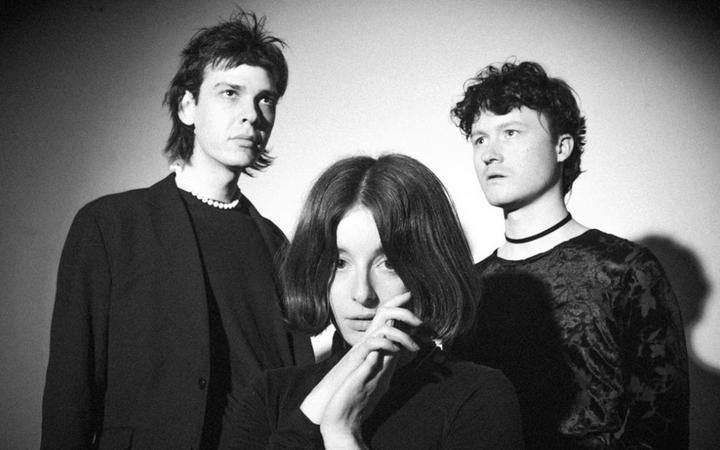 Berlin is a city synonymous with techno music. It originated in Detroit but was embraced in Germany, and still thrives in the capital thanks to legendary clubs like Berghain.

I interviewed the Berlin-based band No Romance last year, and they told me that while the music they make isn’t electronic per se, they all enjoy dancing to it in the city’s clubs. Their new EP Unfold has just been released, and I feel like I can almost hear the proximity of those clubs in the band’s new tunes.

No Romance is made up of Lucy Holliday from England, who sings and plays synth, and two New Zealanders, Joel Ivan Thomas on bass and guitar, and Isaac Hickey on drums.

They released a trio of singles during 2020, all of which were fine slices of noisy gothic pop. Unfold is a step up sonically, the band peeking out of the murk to highlight their songwriting and rhythmic focus. That might be partly due to the presence of Nick Roughan of Flying Nun band The Skeptics, who were active during the eighties. Roughan produced this EP, and while I’m not sure how he became involved, there’s certainly some crossover between bands style-wise.

He may also be to thank for how great this sounds on headphones, with real attention paid to stereo placement - not something I always notice, but here with such sparse arrangements and generous reverbs, it’s a lovely effect.

Lyrically the EP sprang from a breakup Lucy Holliday went through, and in a recent interview, she said she started writing its lyrics while she was still in the relationship, a fact which seemed to surprise Joel. I’m sure this state of transition fueled some of Unfold’s melodrama, but there’s also a feeling of relief or liberation in there too.

The cover art shows a porcelain human form with grass and flowers erupting out of its back, and there’s a nature theme in some of the song titles: ‘Garden’ and ‘Grasslands’. I’m still chewing over how that ties together - life springing from something lifeless maybe. Regardless, it speaks to the thought and care that’s gone into this four-song package.