Tony Stamp shares his perspective on Anthonie Tonnon's marriage of music and political musings, the shiny pop of Onono's debut, and Wellington five-piece Grawlixes' beautiful songs about wanting to kill each other.

Leave Love Out of this by Anthonie Tonnon 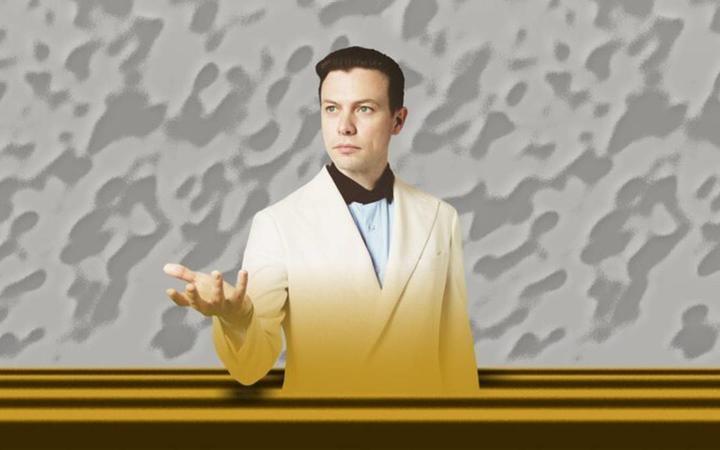 It’s been six years since Anthonie Tonnon’s last album Successor. The Whanganui-based singer-songwriter and four time silver scroll nominee has been keeping busy developing immersive live shows like Rail Land and A Synthesized Universe, which had music written especially for them. He also started a company called Whanganui Connection, who’ve taken over operation of the Durie Hill elevator.

As well as all this though, Tonnon is an extremely deep thinker, who takes years to craft his songs. His new album Leave Love Out of This only contains eight tracks (nine if you buy the CD), some of which were released as singles up to four years ago. But each is perfectly formed, and doesn’t just contain great songcraft, but practically has a thesis statement and conclusion.

‘Two Free Hands’ came out first in 2017, and was Tonnon’s first release to feature the Wellington-made device the Synthstrom Deluge, which generates drum and synth sounds. It finds Tonnon writing from the perspective of a guidance counselor who’s doubting themselves. In the album’s PR he explains “How do you advise students when society is in existential crisis”. But he doesn’t stop there, pondering how humans learning to walk upright left them with the ‘two free hands’ of the title, which our species then had to figure out what to do with.

This is what I mean about Tonnon being a deep thinker. It also hints at a persistent subtext in his songs - the idea that society has lost its compassion. ‘Old Images’ is a love song about his wife, and looking at old photos of her, but near its midpoint he starts to reflect on her parents, and his, living through the cold war, and wonders if their generation made the right decisions.

When I interviewed Tonnon for Music 101 he spoke about the way the title track ‘Leave Love Out Of This’ (the song which earned him a spot on this year’s Silver Scrolls long list), references New Zealand’s transformation into a free market economy during the 1980s, and argues it was for the worst.

Some listeners took great offence to that, and texted in to let me know. But I don’t think he means to be offensive, in fact I think he’s considered all perspectives with equal empathy.

I first became aware of him when he fronted a band called Tono and the Finance Company. At the time I thought it was a funny name for a band - I still do - but I’ve come to realise that practical concerns like finance inform his songs as much as things like romance.

‘Leave Love Out of This’ might have the ‘L’ word in the title, but he’s actually positing that humans aren’t all, as he said in our interview, ‘rational actors’. In the lyrics he mentions trading emotion for clear mathematics.

So there’s a lot going on lyrically in these songs, but I should talk about the music. I really like how the Deluge builds the bones of many of these tracks, and acoustic instruments are carefully curated around them. Jonathan Pearce from The Beths co-produced the album, as well as co-writing four of its songs, and he and Tonnon clearly have an ear for when to strip things back, and when to let things swell.

Leave Love Out of This is my favourite kind of album, one with impeccably written songs that you can sing along to, with plenty of substance in the production and lyrics if you want to delve deeper.

Anthonie Tonnon has chosen his own distinct career path, making lateral decisions like moving to Whanganui, selling socks as merch, and building live shows around railways. He’s also taken the the time to hone his craft, and this carefully thought-through album was absolutely worth the wait. 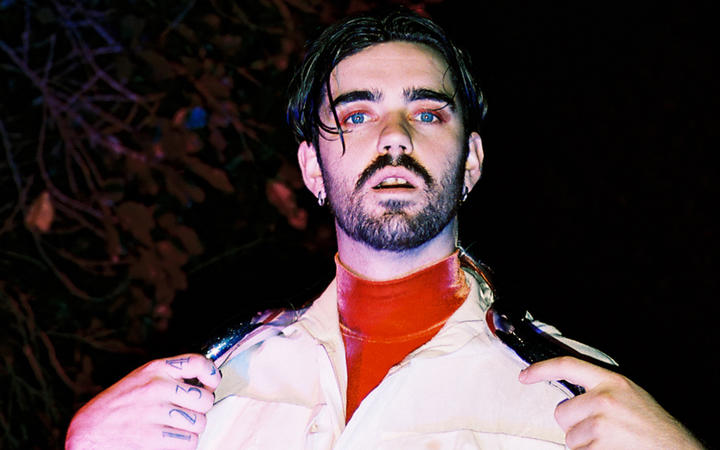 I’ve been thinking lately about what’s happened to pop music over the last few decades. The biggest stars are maybe more deified than ever, but many of them are prepared to get very candid on social media, and give fans a genuine peek behind the curtain.

At the same time, I feel like pop - the genre - is more, well, popular than ever, it’s just diversified like everything else. As a local example, what sounds to me like something very close to commercial pop music, is coming out on an independent record label.

Onono is the solo project of Jonathan Nott from Wellington. His new, self-titled album is full of experimentation and impulse. But it mostly operates within an accessible shiny pop aesthetic.

Nott is the cousin of Georgia and Caleb Nott, better known as Broods, and he shares their interest in synth-heavy hooks. He was also their touring drummer, and plays in the band Hans Pucket. Onono seems to operate between Broods’ populist impulses and Pucket’s indie vibe, and see Nott handling everything himself.

He’ll often bust out his impressive falsetto, like on the funk fueled ‘Charms’. “Put your charms around me, let me be your goal for the nighttime”, he sings, before an appropriately raunchy guitar solo is interrupted by an even raunchier synth solo. It’s catchy, and charming, and honestly not something you would’ve expected to hear from someone who plays in an indie guitar band in years gone by. In my youth, scenes were much more territorial, and pop music was sometimes sneered at, but nowadays there’s a much healthier attitude to musical cross pollination.

On 'Fontelina', Nott unabashedly channels the eighties, with help from a reverbed drum machine and bubbling synth. Tracks like that also stand out for their sparse rhythm - much of the album rides a wave of twitchy, slightly hyperactive beats, which is maybe to be expected from an album by a drummer. The opener ‘Vincent’s Castle’ is a bit of a showcase for Nott’s playing, going from an icy serenity to an explosion of the kind of nervous energy found on latter day Radiohead albums.

The liner notes for this album simply say ‘This album took me ages but it's finally here’. It’s easy to see why. Jonathan Nott is clearly very talented, and it’s not really fair to label him 'a drummer' when he can do everything needed to make an album.

I’ll add to my ruminations about the state of modern music by saying that I think in general, people are getting more talented at a younger age. I think in part that’s because there are resources online to help you learn whatever you need.

But it’s still immensely impressive that one guy wrote and recorded these tracks, and that this self-titled album is strong enough to stand alongside ones that have a lot more money and resources behind them.

I Love You To Death by Grawlixes 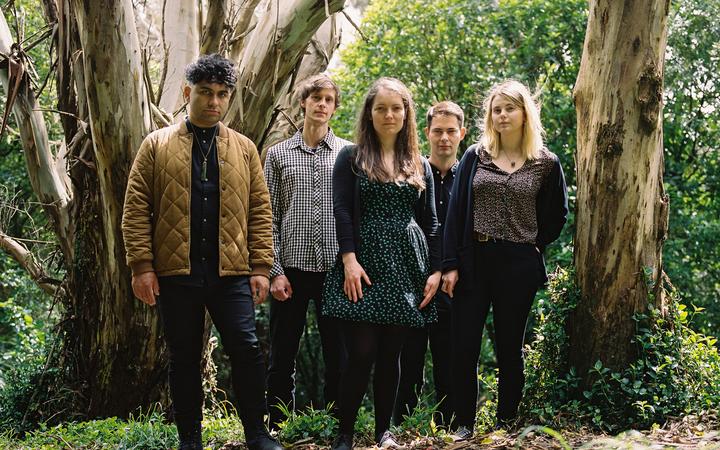 When you’re the type of music fan who hunts down new releases, you see a lot of bios - the space where bands or artists (or their publicists) describe themselves. But I was really taken with the one for Wellington band Grawlixes, which describes them as “an existential folk-pop band”. They say their songs are about “doomed relationships, not being invited to parties, and wanting to murder each other.”

That last line definitely raised an eyebrow, and I assume it’s what inspired the title of their second album: I Love You To Death.

When a band like this is led by a man and woman, often singing in harmony, it’s tempting to imagine they're in a relationship and singing about each other, but this is slightly more complicated.

They first encountered each other when Penelope Esplin was at art school, and Robin Cederman was a nude model. Later they wound up in the same band (Sunley Band), and then a romantic relationship. Their debut album Set Free was made during that relationship, as a duo, and they broke up shortly after its release.

But Grawlixes persisted, and for album number two they’ve expanded to a five piece. Songs like ‘The Wrong Idea’, benefit from the spry rhythm section of Hikurangi Schaverien-Kaa on drums and Emma Hattaway on bass, and Alex Vaastra’s contributions on violin are lovely. They also steer these folk songs toward something a bit more countryified. Likewise the chorus in that one brings plenty of sass to the table, in Esplin’s voice as she delivers loaded lines like “I can be pretty smart for an idiot”.

A high point is ‘Dalliance’, which deploys Esplin’s accordion to good effect. The band meets the song’s subject matter - about the fleeting encounter the title suggests - with a downright Parisian jauntiness. It could almost soundtrack a romantic encounter in a spy movie. Lyrics like “two quivering quads through your petticoat” and “I smelled your scent” are admirably raunchy for a bunch of indie kids.

The song that first grabbed my ears is ‘Immortalised’. It’s also the one that really fits the band’s self-description of ‘existential’. “I live my life through a lens” goes the chorus. “Immortalized” seems to refer to leaving a legacy, and makes me think about the way we document our lives on social media. It’s another song about relationships, and includes a great pun on the word “negative”.

There’s an unmistakably New Zealand melancholy to Grawlixes music, and there’s something about it that feels refreshingly honest. Maybe that comes from being in a band with your ex. It’s certainly honest to admit wanting to kill each other.

But I Love You to Death is far from being a slog. It's at its best when Esplin and Cederman’s voices merge with their bandmates’ contributions into a unified front that's frequently quite beautiful.