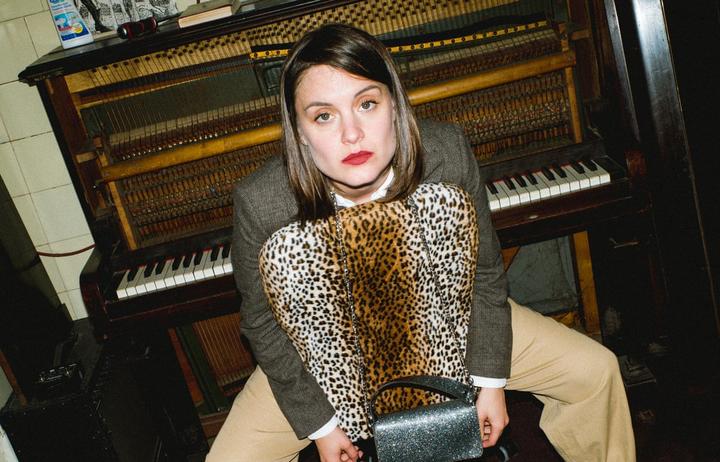 A musician who born in Baltimore but who's lived in Hamburg for the last ten years already feels like an atypical story. Even less typically, Sophia Kennedy's debut fused electronic production with elements of musical theatre, along with dozens of other influences. Her second album Monsters finds her even more fearlessly eccentric and flamboyant.

‘I Can See You’, is one of a handful of more straightforward pop songs on the album, although it does feature the line “We’ll both look the same when we lie in our graves”. Kennedy is very hard to sum up, and I wind up looking for meaning where maybe there is none.

For example the album art has her in the studio, looking at her phone. But look to her right and you notice a piano with a protruding tongue and sharp teeth. So is music the monster? Are these songs monsters? She’s an artist as likely to do something for the sake of a goof as any other reason.

Track two is called ‘Orange Tic Tac’ - a refreshment that’s never mentioned in the lyrics. Kennedy’s delivery approaches rap in the verses, and in the chorus something closer to a carnival barker. She sings “Like a ghost in a suit I’m floating down the boulevard”, and it’s macabre, but I’m also pretty sure it’s just about a stroll through Hamburg.

A loop of her manipulated voice runs through the track. Electronic elements like this are possibly what got her signed to Pampa Records, who specialize in progressive dance acts. They call it their “first songwriting album”. Pitchfork included her debut in their Best Electronic Albums of 2017, and The Cut called it “the most exciting pop album out this year that you’ve probably never heard of.”

For Monsters she co-signed with City Slang Records, and their description of her music might be the most accurate-  they say it’s “wrongness that’s right”, “abstract melodic turns and instrumentation that shouldn’t work but does”.

There’s a layer of artifice that maybe harks back to Kennedy’’s previous job writing songs for theatre productions, but the music doesn’t feel fake. ‘Seventeen’ is a wistful ballad about youth, it just features opaque lines about licking blood off wings and blossoming into night.

‘Cat on my Tongue’ is about struggling to talk to someone. It starts off feeling like hip hop before segueing into dramatic piano chords, spoken word; even the sound of thunder. It almost feels like a Serge Gainsbourg outtake.

My favourite moment comes near the end on a track called ‘Up’, Kennedy’s restrained voice riding a motorik beat that increases in urgency as drones rise dramatically around her. It reminds me of similar Radiohead experiments when they ride the line between Krautrock and jazz - eventually she even wails in Yorke-esque fashion. But it does feel slightly unfair comparing Sophia Kennedy to anyone. Nearly every choice she makes is surprising, and rewarding, and Monsters is a fine collection of ‘wrongness that’s right’. 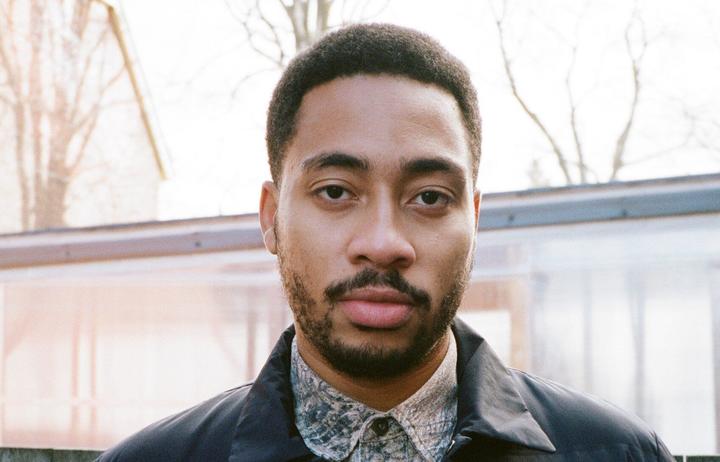 The list of music critics turned musicians is a short one. Lester Bangs put out a few albums, but not much else springs to mind. The first time I heard of Rollie Pemberton, he was reviewing albums for Pitchfork, and the second time, he’d released a hip hop album under the name Cadence Weapon. Some years later he’s a published author, was the 2009 poet laureate of his hometown in Canada, and has just released his fifth album.

'Cadence Weapon' is a brilliantly self-descriptive nom de plume, and while Pemberton has always trafficked in fighting words, on this album he explicitly takes on a range of social ills. In 'Play No Games' he has  a go at prime minister Justin Trudeau, in typically plainspoken fashion. 'On Me' finds him airing his concerns about public surveillance.

It’s an important distinction that this is Canadian hip hop. It’s maybe most apparent in the production, which draws heavily on UK variants like Grime - Pemberton has always favoured video game bleeps and fractured rhythms. He’s drawn on a large roster of local producers for Parallel World, but only one of them gets an artist credit - fellow Toronto dweller Jacques Greene, who creates progressive flavours of dance music. Here he sets up a sort of post-UK Garage beat that evokes Burial, before adding blistering layers of synth, while Pemberton champions the racing driver Ayrton Senna.

Using Senna as the model for an empowerment anthem is an inspired move, and Pemberton has said he was surprised no one else had ever done it. It’s the album’s clear high point, and its most triumphant. Cadence Weapon always sounds defiant - this is an album that starts with the line ‘Black is back’ - but it’s worth noting the mournful undercurrent that runs through some of these songs.

His last album had a track called ‘Real Estate’, and its spiritual sequel appears here. It’s called Skyline, covers gentrification, and has a hook that asserts Pemberton's neighbourhood has grown so much - upward - that it’s blocked out the sun.

On ‘Eye To Eye’ Pemberton tackles police brutality and the disproportionate targeting of black people, but he sounds resigned rather than angry, deliberately underplaying lines like “Thank god I made it home today”.

Cadence Weapon has said he was inspired to make a political album after the murder of George Floyd, and that’s lead him to address a litany of topics, from historical mistreatment of Black Canadians to water shortages. He ends with ‘Connect’, a track that covers the internet’s ability to drive us apart.

There was a gap of around ten years between Cadence Weapon albums before his return in 2018. Pemberton also recently returned to music criticism, writing for Pitchfork about nineties jazz-rap outfit Freestyle Fellowship, and has another book on the way called Bedroom Rapper. It certainly feels like he’s entered a second, politically-fueled phase of his career. 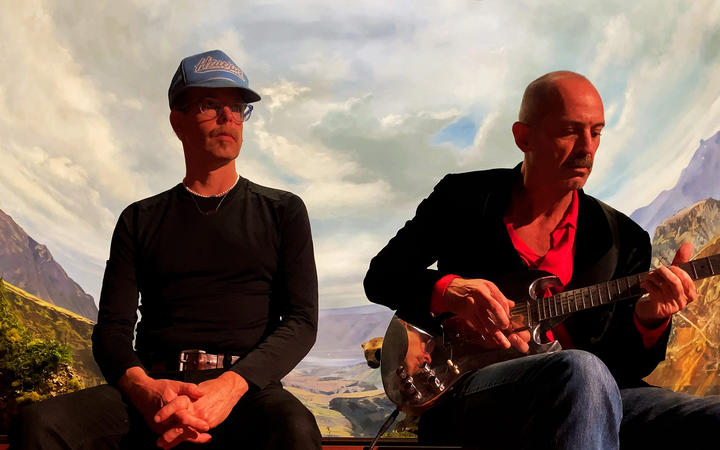 In the early 2000s, folk-country artist Will Oldham and guitarist Matt Sweeney began an experiment. The former would write lyrics, and send them to the latter, who would use them to write songs, including melodies for Oldham to sing.

The result was released in 2005 and called Superwolf, and while both members had already secured their legacies as indie superstars, it marked a highpoint. Legendary producer Rick Rubin has said it was his favourite album for some time. Sixteen years later they’ve released its follow-up, Superwolves, and it’s enjoying just as much acclaim as its predecessor.

Oldham is better known as Bonnie “Prince” Billy, and has made his career on songs about sorrow, and, as on opening track 'Make Worry For Me', an undercurrent of something sinister. Sweeney used to lead a band called Chavez, joined Billy Corgan’s Zwan for a time, and is an in-demand session guitarist, working with everyone from Adele to Iggy Pop to Run the Jewels. His playing is nearly as distinct as Oldham’s reedy voice.

You can hear his technique clearly on ‘My Popsicle’, in which Oldham addresses his young daughter, calling her his popsicle, ‘made by your mom and me’. Sweeney undercuts the song’s sweetness, changing one note in a chord to unsettling effect.

The album took five years to make, and during that time Oldham became a father, got married, and lost his mother to Alzheimer’s. Many of these songs are clearly about his daughter, but in classic Oldham fashion, the specter of death hangs over everything.

Maybe counterintuitively, the liveliest track is called ‘Hall of Death’, and features some unlikely guests - Saharan guitarist Mdou Moctar and members of his band. The result’s a real foot-stomper. I can hear traces of Sweeney’s nineties alt rock beginnings there, and Moctar’s unique playing feels right at home. It’s as boisterous as the album gets. The pair are more inclined to lower the volume to something more intimate.

Oldham refers to someone called ‘Shorty’ on one track, and it’s a safe bet that’s another name for his daughter - along with ‘popsicle’. The silliest track is a different one called ‘Shorty’s Ark’, where he goes through a list of animals, with the express purpose of teaching them to her. It’s beautiful in its simplicity, with Sweeney’s guitar and high pitched backing vocals a warm, jovial accompaniment.

It seems like Will Oldham can’t open his mouth without poetry falling out, and I was so taken with his description of this project I need to quote it here.

He said “I’m incapable, with my present bag of tricks, of making anything that could approach the beauty or rockingness of what Matt can build, musically. In turn, I have a handle on creating lyrics and singing them that is not even on the property of Matt’s wheelhouse. And yet we value, to the point of appreciating the cruciality, the role each other’s domains play in the creation of a musical world. It’s a relief when each of these songs gets realized; each is a little dream come true.”

That last part certainly feels true: these tunes are the result of years of work, and each somewhat special.

Personally, a song called ‘Resist The Urge’ is one that floors me every time. In it Oldham dispenses advice to his wife and daughter, telling them that if he dies they shouldn’t weep or falter, because he’s still with them. In response to these words Sweeney has written music that’s upbeat, and comforting, and the result - like a lot of these songs - is profound, and powerful.