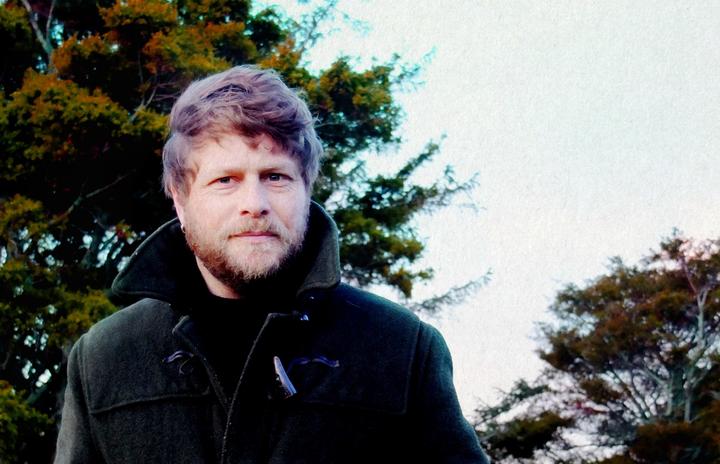 When Edward Castelow stopped using the stage name Dictaphone Blues and switched to using his own, I thought that might signal a more mature direction in his music, with less of the rich vein of humour that cut through the three Dictaphone full-lengths. Maybe Edward saw this response coming, because he went ahead and called his album Mirth.

The album has its serious moments, but by and large it’s shot through with the sort of good vibes that anyone who’s followed Edward’s career will recognise. Originally from Christchurch, he’s been making music since the late nineties, the sort of voracious performer who’s popped up playing guitar in various bands over the years, sometimes stealing the limelight in the process. The man’s stage moves are magnetic.

On this nine track album, you can almost feel a lifetime of different bands fighting for supremacy. Mirth is varied and unpredictable in the best way. It’s even hard to pin down Edward’s singing voice to one register. The thing that keeps coming to mind for me is the kind of classic pop produced by Phil Spector, or that may have emerged from the Brill Building in the sixties.

On 'There Swells My Heart' Edward’s guitar is joined by a brass section mirroring the swooping melody, with two women credited as Anna and Julia taking up the backing vocals. It feels like a marriage of vintage pop and slightly humble kiwiana, and features Edward reaching down into his baritone. He has a wide vocal range, which all gets flexed over the course of the album.

But he'll sometimes save his best melodies for the instrumentation. On 'Down By The Riverside', the same motif plays throughout on keys, over sparse acoustics. Then just over halfway an electric guitar takes over, as bass fuzz and drums propel the song outward. It’s a bold gambit for an opening track, and the kind of subversion you only get from someone very familiar with songwriting conventions.

'Tongue and Groove' has a similarly expansive approach, with sinister harmonies over an 808 drum machine boogie and lyrics about woodworking. The refrain "If you're havin' a bad day" breaks up the tension in a broad kiwi accent, answered with a call to 'just dance'.

With songs like that I still feel like I can hear a bit of a wink. In fact the only song here that seems completely sincere is 'Swift Exit', which comes at the album's mid point. “My heart has been broken” sings Edward over a lush arrangement of strings and brass, and perhaps because every other song is so committed to smiling in the face of adversity, this one might leave you with a speck of sentiment in your eye.

I think he finds the perfect balance on 'Hacky Sack Dreams', which paints a picture of NZ mentally fortifying itself for Winter; upping the meds and cutting out drinking during the week. Edward sings that he’s “Caught between malaise and the duvet” before ending on the line “I try to remember there will be another summer”. It’s all very relatable, couched in a song that has some gnarly synth and drum machine experiments to listen out for.

A lot of care and craft has gone into Mirth. But I think what I like most is the balance between serious topics and the amiable vibe hanging over it all. These are songs that feel like they want to be mates with you. They’re well worth spending time with.

The Licking of a Tangerine by Jazmine Mary 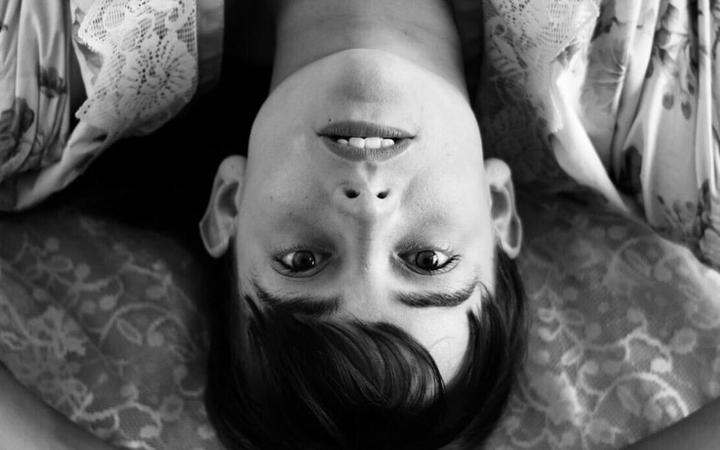 A press release did the rounds recently, celebrating a new milestone for the streaming service Spotify. Sixty thousand songs are uploaded to the platform every day. Hearing that, keeping up with the play can start to feel overwhelming.

But it’s still such an enjoyable experience to hear an artist for the first time, and be so thoroughly blown away.

Jazmine Mary is originally from Gippsland Australia, and now based in Auckland. She’s listed on Bandcamp as ‘dream folk’, but poke through her back catalogue and you’ll find improvisational soundscapes, field recordings from India, even some downbeat electronic pop.

This album is the first released under the name Jazmine Mary, and it feels like for the time being, she’s settled on a sound that’s an appropriate vessel for her haunted, slightly gothic songs.

'Dancer' features open guitar chords, a swooping violin, a playful saxophone part, and Jazmine’s voice ringing out clearly. The line “Walking around with a belly full of rocks” shows her slightly ominous impulses, but as throughout the album, there’s a triumphant edge to the music.

On 'Move Me', she sings ‘I wanna be like pop music’, over a somber arrangement that feels like anything but. The tempo shifts, Jazmine’s voice runs through a scale before settling on something close to a speaking register, and you feel the ice begin to thaw. “I lost my voice from talking like the boys” is a line delivered with a smirk, and then we get more delightful saxophone honks.

Those are courtesy of Aaron Lovich, and Peter Ruddell from the band Wax Chattels. Strings on the album were handled by Dave Khan, who over the years has played in many bands, including with Reb Fountain, and Marlon Williams.

Mary’s quote accompanying the release of the album said ”These songs for me feel like a breath of bravery I had to act on quickly,” and I think that made me expect something spontaneous or off the cuff. But all these songs feature well thought-out arrangements.

Listening to the album I was scrambling for comparisons. There’s definitely common ground with the similarly expressive vocals of Aldous Harding, even some Anonhi or Antony & The Johnsons in the way Mary will linger on and savour a drawn out syllable.

PJ Harvey also springs to mind, as does Nick Cave and The Dirty Three, in the mix of spookiness with warmer vibes, and the way the tempo of the songs will slip and change to fit them.

'Skeleton' features some attention-grabbing vocal gymnastics and summery, fret-bending guitar from Mary. It almost feels like a woozy sea shanty, apart from the lyrics about cigarettes on the television.

I think my favourite bit of wordplay comes in 'Keep My Cool', which edges right up to being something like a traditional ballad, albeit with more fluttering sax, like something from Bowie’s Berlin trilogy.

“All the punks in the park call the cops on their friends” she sings, managing to make it sound heartbreaking as well as hilarious. The next line “I was kissing her and she was killing me”, is just the former. Rhymed with “A thousand butterflies lay at my feet”, it’s unnerving, and quite beautiful.

Full disclosure: I had actually heard a few songs by Mary’s earlier pseudonym ‘him.’ But this album feels like a statement of intent by a new artist with a strong vision. The fact that it’s called The Licking of a Tangerine is just one of its many pleasantly baffling elements. Jazmine Mary’s experimental background still shines through, particularly when letting her vocals run loose. But these beguiling, transportive songs will have me coming back to this album for a long time.

As The Love Continues by Mogwai 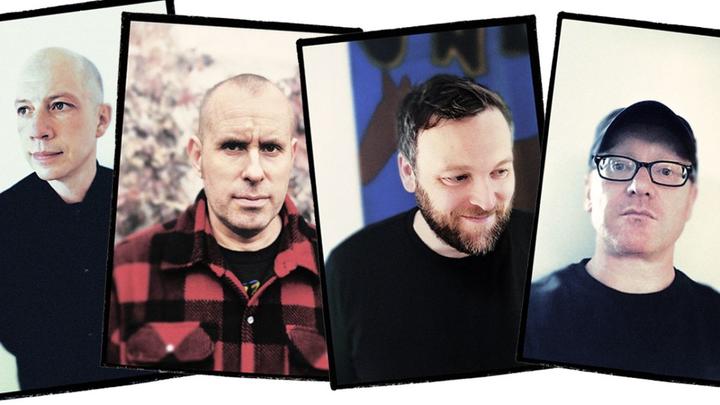 The number one album on the UK charts this week is perhaps not one you might expect. It’s a Scottish band celebrating its 25th year of existence, that mostly makes instrumental music.

They’re called Mogwai, and for a quarter century now, they’ve specialised in creating epic moments of musical majesty. Tracks build and escalate, and more often than not, reach new heights when the band hits their distortion pedals.

They also specialise in amusing song names - the opener is called ‘To The Bin My Friend, Tonight We Vacate Earth’, which was something UK musician Benjamin John Power said while recording himself talking in his sleep, and sent to the band.

The name 'Dry Fantasy' is a reference to guitarist Stuart Braithwaite using a lot of reverb (the technical term for that is wet). The song is a great example of latter day Mogwai, incorporating electronic textures, and spotlighting a melody that to my ears could only have come from this band. They’re often happy to linger on a chord progression or run of notes for minutes at a time, creating a kind of hypnotic fugue. There are no complaints when the melody is this good. In fact I’d say it’s one of their best.

When the band started they focused on making very slow, often very loud songs, but, in the inverse to what you might expect, started incorporating faster tempos on subsequent albums. There are generally one or two songs per record that include singing, and here it’s the single 'Richie Sacramento', featuring Stuart’s brittle delivery on what must be the closest the band has come to making a pop song, albeit one smothered in guitar fuzz.

The highlights on any Mogwai album are the perfect moments they create as a band, a combination of carefully chosen notes and the four members responding to each other in the studio. The track 'Here We, Here We, Here We Go Forever' is another one with a traditional structure, and I love the piano line that drops in after its rambunctious chorus.

Elsewhere on 'Pat Stains', the band lingers on an atypical time signature and slowly build a particular mood in the way they excel at. The song features saxophonist Colin Stetson guesting, adding subtle, fluttering textures as it swells and becomes more grandiose.

Another guest on the album is Atticus Ross, who just won a Grammy award for the soundtrack to the movie Soul, which he composed with his regular collaborator Trent Reznor. Here he adds an otherworldly string section to the song 'Midnight Flit', which is happy to linger on three chords for over six minutes, but keeps blossoming with a sort of undefinable emotion.

Mogwai create music that feels huge and emotive, and after twenty five years, there’s still no one else that sounds quite like them. Getting their first number one album is not something I imagine they expected or even tried for, but it’s a lovely reward for all these years creating blissfully noisy soundscapes. With any luck there are many more to come.