Nick Bollinger discusses the killer riffs and retrograde lyrics of AC/DC, the musical wanderings of German-born, Melbourne-based Hachiku, and the 31st album from Elvis Costello. 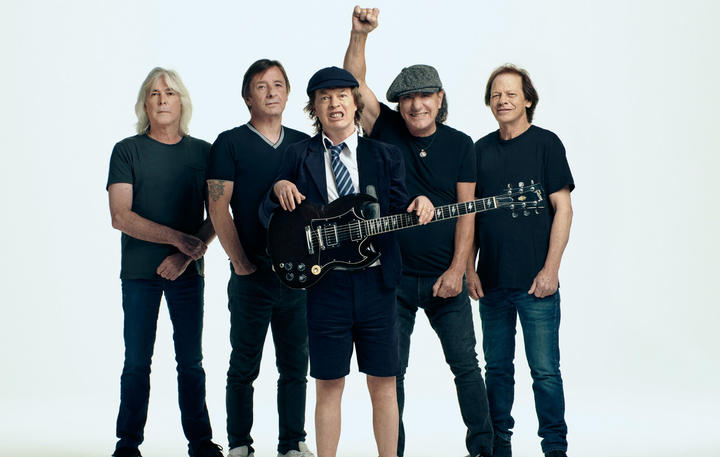 If ever there was a band who could credibly bring a note to class excusing them from making another album, it is AC/DC. In the past few years they have had a lead singer turn deaf, a drummer banged up in New Zealand for various dirty deeds, and - perhaps most crucially - lost their founding guitarist and songwriter Malcolm Young, following his retirement with early onset dementia. And yet somehow they have produced this.

Big major chords, thundering drums at their trademark mid-tempo, and singer Brian Johnson - back with new high-tech hearing aids and wailing as though, in Robert Christgau’s memorable words, “there [was] a cattle prod at his scrotum”. After what they have been through, lesser bands might have called time on the whole enterprise by now, but endurance is what AC/DC’s legend is founded on, along with killer riffs and retrograde lyrics, all of which you’ll find here.

The riffs always relied on the twin-guitars of Angus Young and his late brother Malcolm. At their best, they were like Keith Richards and Jimmy Page, each reduced to their essence, with any flash or filigree cut away. And they had a tempo of their own, slower than that generally preferred by Zeppelin or the Stones, allowing for those big spaces between the chords that became a signature. Where do those riffs come from now with Malcolm gone? It seems they had been stockpiling. The dozen tracks on Power Up are credited, as per usual, to both brothers and were apparently completed by Angus from a store of unused riffage dating back as far as 2008’s Black Ice. And the best of these give you same warm feeling in your gut, as they modulate around those simple ringing chords.

but while these new ones occasionally hit the spot, none are matched to choruses as rousing as ‘Highway To Hell’ or ‘You Shook Me All Night Long’. And then there’s the lyrics. Sometimes it’s hard to tell what they are actually singing. I honestly thought what they were singing in one chorus was ‘I shot the dog!’ until I checked the song title and realised that it is actually ‘a shot in the dark’.

Typically an AC/DC lyric combines a kind of laddish celebration of bad behaviour with straight-out sexism, and these latest ones are no exception. It’s what they have always done and maybe you can’t expect anything better from a group in which the guitarist, at retirement age, is still wearing a school uniform. ‘Lady, just try the money shot/Best taken when hot’ goes one particularly silly couplet, but perhaps more disturbing are the implications of a lyric that goes ‘if you reject me/I take what I want’.

AC/DC and their fans have always shrugged off their lyrics in much the same way men excuse themselves for whistling at women in the street. It’s meant to be a compliment, they’ll say. Can’t you take a joke? And it’s true that AC/DC’s lyrics tend to be so stupid that it’s hard to take them seriously. Still, you would think a band with a lot of female fans might want to show more respect for their audience. The words are just one the thing, though. The fact is, the days when guitar-wielding boys dominated the stage are in decline, and bands like AC/DC seem increasingly like quaint relics of a bygone age. The most interesting bands around at the moment are led by women, while there is plenty of exciting music being made without guitars at all. And while Power Up is a good simulacrum of classic rock, and I do have a soft spot for Angus Young’s power chords, the end can’t be far away, not just for AC/DC but for the genre they helped create. 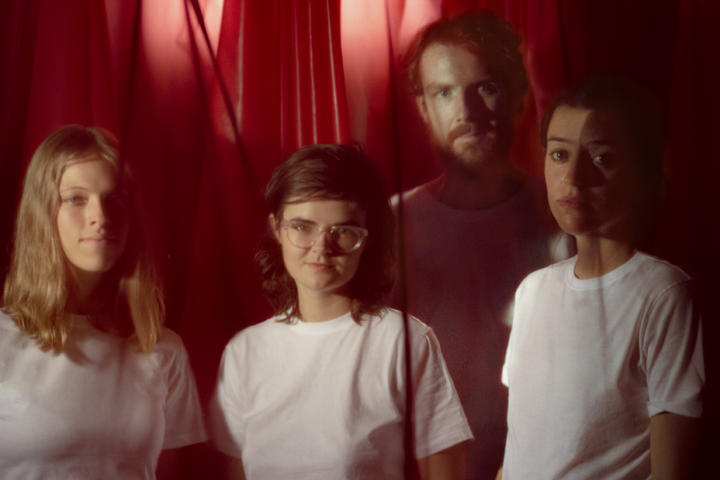 I’ll Probably Be Asleep by Hachiku

Hachiku is a band based in Melbourne, that most cosmopolitain of Australian cities, centred on the writing and music of Anika Ostendorf, a twenty-five year old German-born wanderer, who has made it her home after spells in London, Iceland and elsewhere. But what is notable about Ostendorf is not so much her peregrinations as her musical imagination.

On ‘Busy Being Boring’ there’s an unusual pairing of dreamy bedsit pop - simple drum machine, washy keyboards - and something more akin to roots rock, complete with whoops of slide guitar. And it just gets more interesting from there.

In ‘I’ll Probably Be Asleep’ there’s almost a rock anthem straining on its leash, with big reverb-laden guitars and U2-style drums, only Ostendorf sings against the backing in a whispering, confidential voice that undercuts the rock heroics. And again, there’s that unexpected melodic flourish as she sails up into falsetto at the end of the chorus. As far as the content of her whispered confidences goes, that does at times have something to do with her global wanderings. She addresses these most directly in the song she calls ‘Bridging Visa B’. It’s fat chords and slide guitars again as Ostendorf bemoans the visa process she’s been subjected to in relation to her application for Australian residence, but it’s a subject with universal implications, especially when applied to refugees or migrant workers. They say write what you know, and her songs certainly carry a strong individual voice, while amplifying generational concerts. Another song ‘Portrait of the Artist as a Young Woman’ twists a title from James Joyce, identifying with the Irish author’s rebellion against the conventions of his own country and fleeing into self-exile, though she’s admitted that she has never actually been able to get through Joyce’s book. But the song, which reflects on an altercation with a climate change denier, expresses something plenty of her peers have felt.

The title I’ll Probably Be Asleep hints at the dream-pop nature of some of the music, but there are other, less predictable things mixed in with this artist’s pop dreams. 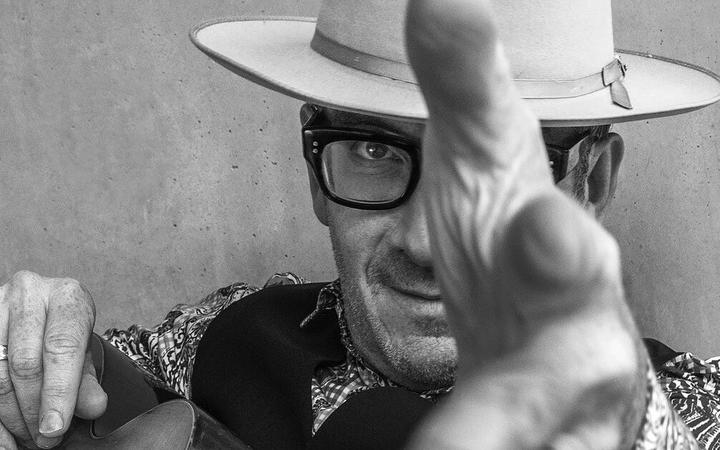 Elvis Costello is an artist I’ve long admired, and for almost as long been slightly wary of. Boldly committed to pushing his limits, many of his experiments have seemed to be because he could, rather than because he should. But his latest is an experiment that pays off.

Hey Clockface is what someone who has been keeping better count than me says is Elvis Costello’s 31st album, and for a bunch of songs that in various ways address the passage of time, that’s Elvis being unusually literal.

Broadly speaking, there are two quite different collections of songs here, and it is as though they have been shuffled together like two seperate packs of cards, which creates some dramatic contrasts yet remarkably no musical clashes. Rather, the effect is more like that of a late-period Beatles record, where a clangorous rock song could segue into a jaunty novelty like the title track.

A few years back, Costello teamed up with hip-hop headman Questlove and his band The Roots for what I thought was his best album in years, Wise Up Ghost. Sometimes repurposing lyrics from his earlier songs, he created a crazy-quilt of an album with a hip-hop sensibility that still showed a songwriter steeped in the history of popular song. I shouldn’t have been surprised, but I was a little disappointed when, rather than continuing in that fruitful direction, for his next album he returned to his long-serving band, The Imposters for a more predictable - if still quite diverse - collection. This new album sits somewhere between the two. Though there’s no Questlove, Elvis might have been recalling that collaboration when was building tracks like ‘Hetty O’Hara’s Confidential’ one virtually on his own with loops and overdubs. Hey, on this classic vituperative ode to a gossip columnist he even does a little beatboxing.

The one-man-band cuts are mostly upbeat, occasionally abrasive, sonically experimental, and lean on Costello’s lifetime love of rock and soul. But these are interleaved with songs of quite a different flavour, recorded in quite a different way. Sessions in a Paris studio with his long-time accompanist Steve Nieve and other skilled musicians, produced beautiful tracks like ‘I Do’. This is Costello the craftsman writing art-songs for the ages, and there are a couple more as good. ‘The Whirlwind’ delivers its intricate lyric and expansive melody without any fuss or grandstanding. The high notes are challenging, but he carries them off. I even forgive him that annoying vibrato.

As I say, the mixing up together of what might easily have been two seperate albums works well. Where in the past Costello has tended to deep-dive into his style de jour - whether it is countrypolitan or string quartets - here the stylistic shifts seem easy and unforced. He’s no longer trying to prove he can do everything; he’s just picked a few things he knows he can do and does them very well. That said, there are a couple of forays into a previously unexplored genre that might test some listeners: anyone for spoken word? Yet I find I like these too.

‘Best album since…’ is a rock-crit cliche one hears around new releases by just about any artist whose career has survived the two-decade mark and I’m not going to use it now. I’ll just say that Elvis Costello has made yet another good album.