Nick Bollinger discusses songs of lost innocence from The Flaming Lips; the quietly instructive narratives of Bill Callahan; and the history-steeped rock'n'roll of Chuck Prophet. 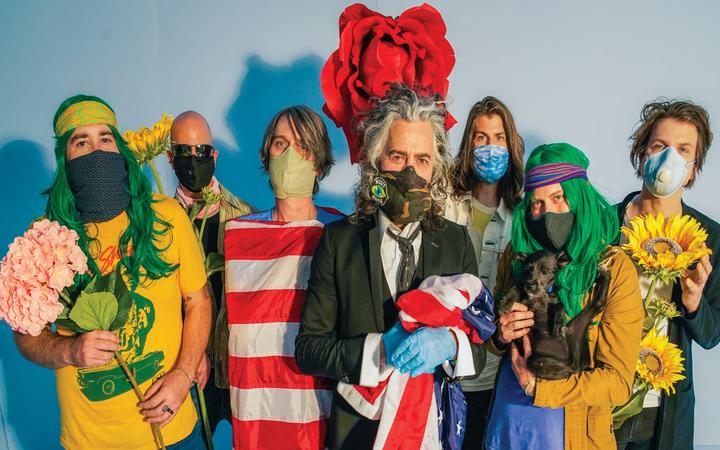 If you have ever watched the The Fearless Freaks, the 2005 documentary history of The Flaming Lips, you’ll realise how improbable the success and sustained career of this Oklahoma band has been. From their beginnings as a bunch of drug-crazed punks with criminal histories and limited musical abilities, they have somehow become a beloved institution, and made music that has moved the masses.

Those records they made around the time of The Fearless Freaks - The Soft Bulletin and Yoshimi Vs. the Pink Robots - still represent the pinnacle of their mass acceptance, and some of their more recent projects have been a little more testing. Tried their dark noise-opera The Terror lately? But their new album harks back to that breakthrough period, and then back a little further.

Sounding like a psychedelic Neil Young, Wayne Coyne is at his most endearing on ‘Will You Return’, the track that opens the new Lips album American Head, soft waves of sound lapping around him as he sings nostalgically to a friend who has possibly died and is certainly lost. It’s the side of The Flaming Lips that made those breakthrough albums so emotionally rich, and it’s the musical location for most of American Head.

As for the geographical location of these songs, it could be Anytown, U.S.A., but thinking back again to The Fearless Freaks it’s pretty obvious that it’s the part of Oklahoma City where Coyne and his bandmates grew up. And the social environment, too, seems to be that of Coyne’s youth, with deviant brothers running foul of the law and bored kids in suburbia seeking heroism and immortality through danger and drugs.

Over the years Coyne’s written a lot about drugs. Along with Lou Reed, he might be the most serious and consistent writer of drug songs a there has been, and along with his eternal themes of love and death, it’s the thread that runs through the new record. He writes matter-of-factly, neither glorifying nor condemning their use. But they cast as melancholy shadow over songs of lost innocence, like the one he’s called ‘Mother I’ve Taken LSD’.

The figure of the mother, too, is a recurring one. Coyne’s obviously cares about his; we meet her, along with his wayward brothers, in The Fearless Freaks. Still, a song here called ‘Mother Please Don’t Be Sad’ goes beyond melancholy and into maudlin, as he reimagines a situation from his youth where he believed he was facing his death. On it’s own it sounds corny. If he gets away with it - and I think he does, just - it’s because of the context he’s set up so well with the other songs.

But truly psychedelic band they are, The Flaming Lips have always been, above all, a sonic experience. And this latest album shows them to be as sonically adept as ever. As with every album they have made for decades now, it was produced by Dave Fridmann, whose particular blend of electronic spaciousness and organic grit seems as much a part of The Flaming Lips as Steven Drozd’s melodic inventions or Wayne Coyne’s winsome voice. And some of my favourite moments come in the semi-instrumentals that act like palate cleansers between a few of the tracks.The spacious mix of synths, drums, xylophone and what sounds like that Peter Frampton voice-tube thing on ‘When We Die, When We’re High’ is wonderful, funky, and I could happily listen to a whole lot more of it. But leaving you wanting more is another of The Flaming Lips’ skills, and this album of sad, beautiful reflections on youth, innocence, loss and altered states - plus a duet with Kacey Musgraves - is a timely reminder that whenever they come up with more it will always be worth a listen. 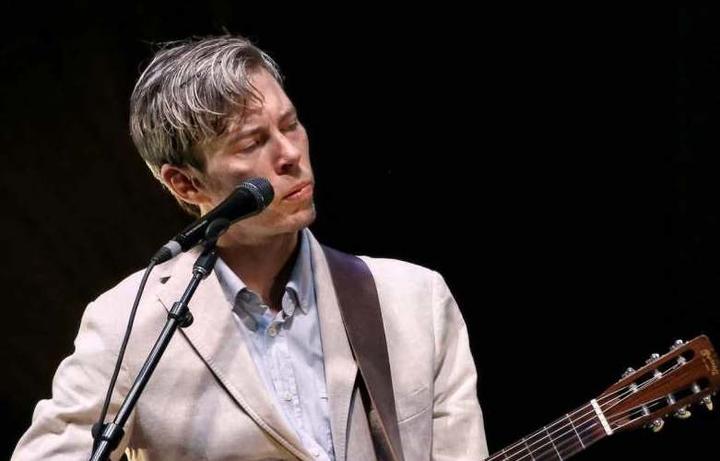 Because he delivers each of these ten narratives on his excellent new album in the same gentle half-spoken, half-sung bass-baritone voice, there’s the temptation to think of the protagonist in each one being Bill Callahan himself. But it’s actually an array of humanity he inhabits, and each has their own story to tell.

Often these are quietly instructive, like the limo driver in the opening track, ‘Pigeons’, whose words of advice to a pair of newlyweds could be heard as the key to the whole album.

The idea of an an endless chain of connections, encapsulated in the line ‘when you are married you’re married to the whole wide world’ recurs in different ways throughout the record. And though Callahan has been making albums for more than twenty years, driven by this kind of laconic, elliptical storytelling, this idea is a new one for him, and evidently reflects the change in his own circumstances. Callahan married six years ago, is now the father of a five-year-old son, and where his songs could once be almost claustrophobically introspective, these new ones, perhaps more than anything, acknowledge the importance of community. Nowhere is that better summed up than in the song he calls ‘The McKenzies’.

Literally the centrepiece of the album, it’s really a short story in song form, in which the ‘type of guy who sees a neighbour outside and stays inside and hides’ has a kind of epiphany when he discovers how his presence can help fill someone else’s loss. I don’t have time to play the whole song now, but it’s worth hearing through to its powerful conclusion. But if Callahan creates an epic just by taking his narrator out of his own house and moving him to his neighbour’s, he gets almost as much drama out of the character in ‘Cowboy’ who doesn’t even seem to leave his couch. And that’s not the only narrative here that essentially begins and ends in front of late night television. There’s ‘Protest Song’, in which the laconic narrator tells us how he heard someone singing a protest song one night when he was watching television and took exception to it. “His songs are lies. Step aside son. You’re gonna get hoit’. Callahan murmurs darkly, reminding me of the gangster persona John Lee Hooker assumed in his badman classic ‘I’m Bad Like Jesse James’. Come to think of it, the slow guitar groove there is a bit like a deconstructed Hooker riff too. But if he’s clearly in character there (as Hooker once told me he was in his gangster songs - ‘I’m a softie’, he said) then I think we’re getting more of a direct freed from Callahan himself in a song like ‘Ry Cooder’, a funny, affectionate tribute to the great guitarist. Like all of this album it feels off the cuff, unrehearsed. And compared to Callahan’s last album, Shepherd In A Sheepskin Vest, which he reportedly tinkered with over six years, I’m sure it is. But that apparent artlessness is something he’s refined over a long time and it just reaches rarefied levels here. Sometimes he gives the impression he’s making it up as he goes along, but take a step back and you’ll see something tightly constructed with not a wasted word. And something similar applies to his melodies, which range from functional to minimal to nonexistent.

But if there’s been a change in Callahan’s approach on Gold Record, it might be symbolised in ’Let’s Move To The Country’, a remake of a song that opened an album he made under his old moniker Smog more than twenty years ago. In that version he left the lines ‘Let’s start a… let’s have a…’ incomplete. This time he finishes them off. 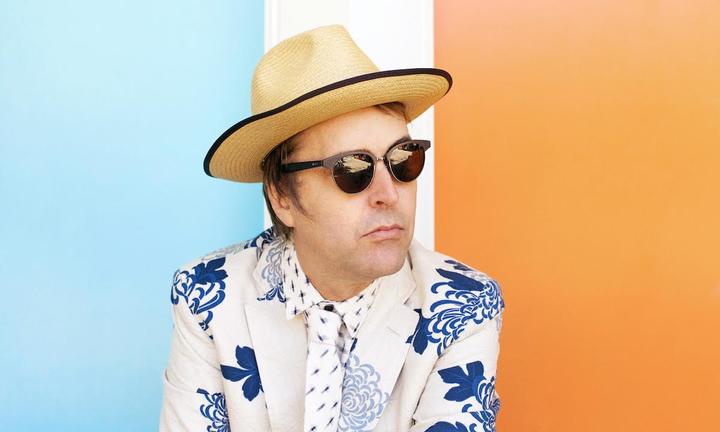 San Francisco singer /guitar-slinger Chuck Prophet has been making great rock’n’roll, and never really getting enough recognition for it, ever since the days of his band Green On Red in the 80s. But through band bust-ups, belly-up record deals, and now a pandemic, he has hung on in there. And that could be what ‘Marathon’ his about: a triumphant rocker on his new album in which Prophet and his long-time partner Stephanie Finch remind each other that love is, among other things, a test of endurance.

The a long view hasn’t just helped Prophet to stay in the game, through a decade with Green On Red followed by a solo career of fifteen albums and counting; it also informs his writing, especially on this latest record. His songs, often written in collaboration with the San Francisco poet Kurt Lipschutz, are full of history.

In ‘High As Johnny Thunders’, Charles Bukowski, Napoleon and Joan Of Arc all get cameos, but it’s the New York Dolls guitarist who is the ultimate subject of the hard-bitten yet romantic tribute. But not all the historic figures that crop up in these songs are necessarily heroes. Richard Nixon is one of no less than three U.S. Presidents who feature. ‘Nixonland’ is a dark, and somewhat ambiguous ballad. But there’s no ambiguity in the song he calls ‘Get Off The Stage’, and though he never names the character he refers to as “an obstruction in democracy’s bowel” it isn’t too hard to figure it out. While there’s always been a folkish side to Prophet’s music, there’s a bit more of it here than usual, especially in topical songs like ‘Stage’, with its hat tip to John Prine. But he’s also a writer of timeless rocking pop, and this one, ’Best Shirt On’, is like something Nick Lowe or Elvis Costello might have done in their 70s prime.

The Land That Time Forgot is more subdued than most of Prophet’s records, but that doesn’t make it dull. In fact the slower tempos and semi-acoustic settings just seem to make more room for him to survey the last few decades of cultural history with his ironic eye. And slow or fast, he always a fistful of great guitar licks.