The Sampler: The Chicks, Keleketla!, The Pretenders

Nick Bollinger reviews a new album from The Chicks - formerly Dixie Chicks - in which the personal is political; a four-continent collaboration under the South African banner Keleketla, and a tough, unsentimental set from Chrissie Hynde and her longstanding band The Pretenders. 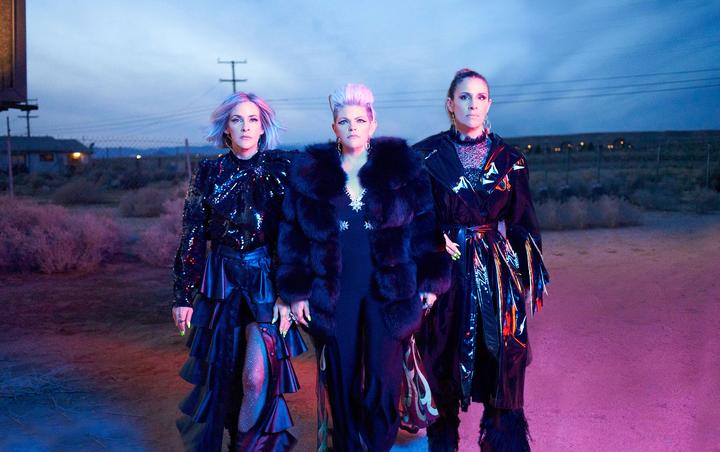 Gaslighter by The Chicks

Natalie Maines has a way of both catching flak and catching the moment. Gaslighter is the new album by what was, until last month the Dixie Chicks. It’s the first record they have made together in fourteen years, and only the second since 2003 when Maines’ comments on a London stage about then-President George W. Bush blew up into a political storm that saw the group’s records burned by conservative fans and their music blacklisted by country radio.

The word that the Dixie Chicks had changed their name simply to The Chicks had a particular resonance in New Zealand. The biggest-selling female band of the last thirty years now shared their name with a beloved if long-defunct Kiwi duo. In their native U.S., though - and especially in the South, where they come from - the name change carried a far weightier meaning. There, the word ‘Dixie’, which once referred to the confederate states, is inseparably linked to the era of segregation and notions of white Southern pride, which in the light of George Floyd and Black Lives Matter, is not a note these morally conscious Texans wished too sound. The name-change gesture in itself makes the album political, and it is echoed in at least one of the songs. But for the most part, the politics on Gaslighter begin at home.

Though the term ‘gaslighting’ - meaning to manipulate a person by creating false narratives - has seen a popular resurgence in a political context, its use in this song is entirely personal. In fact, you don’t have to be a celebrity news junkie to realise that it’s all about Natalie Maines’ recent rather public and acrimonious divorce, a subject that runs right through the album. The line ‘I know exactly what you did on my boat…’ is planted in the opening track, only to be revisited in greater detail in a song called ‘Tights On My Boat’, which I guess is the definition of airing dirty laundry in public.

As the critic Carl Wilson said in a recent Slate piece, that line about the tights is the new ‘Becky with the good hair’; that bit of specificity that authenticated Beyonce’s calling out of husband Jay-Z on her similarly autobiographical Lemonade. Another thing that makes this particular track so unambiguously personal is the way it’s produced. Essentially it’s just Maines strumming a basic accompaniment, and breaking that fourth wall of the recording studio to sing directly to us as though there’s been no producer involved, with what sounds like a spontaneous chorus of sisters cheering her on. That deliberate stripping away of the traditional studio gloss makes me think of John Lennon’s painfully raw Plastic Ono Band album, and it’s a device others from Neil Young to Fiona Apple have used since. Still its effect here is a bit different, and that track is more like an island of minimalism in the middle of a record that is mostly pretty thoroughly arranged. The personal detail keeps right on coming, though.

Musically this group still has its feet in traditional country, with Emily Strayer’s old-timey banjo, those punctuating sweeps of violin from her sister Marty McGuire and even a bit of pedal steel from Natalie Maines’ Texan guitar hero father, the great Lloyd Maines. But with drumming from Red Hot Chilli Pepper Chad Smith, along with Moog, mellotron and various kinds of programming, the total effect is like a country-flavoured version of the high-end pop we’ve come to expect from Jack Antonoff, whose past credits include Taylor Swift, Lorde and Lana Del Ray, and who co-produced Gaslighter with The Chicks.

Annie Clark a.k.a. St Vincent guests on electric guitar  on ‘Texas Man’, and it’s the song here that’s the most fun: the one that says Maines, having vented her spleen for much of this set, is moving on. As she says in the song, “I’m a little bit unravelled but I’m ready”. But there’s also this one, which steps right outside the main narrative to make the album’s most unmistakably political statement.

Namechecking Emma González, who survived the 2018 high school shooting in Florida to become a gun control activist, that statement of solidarity is just another thing that’s unlikely to go down well in certain corners of the U.S., and it’s clear Natalie Maines gives zero anythings about that. But in a broader way, the whole of Gaslighter can be heard politically. Sure, not everyone has a boat, or lives the rarefied life of a country music star. But there’s a sense in which the personal is universal, and there are songs here that might be any mother’s mantra. 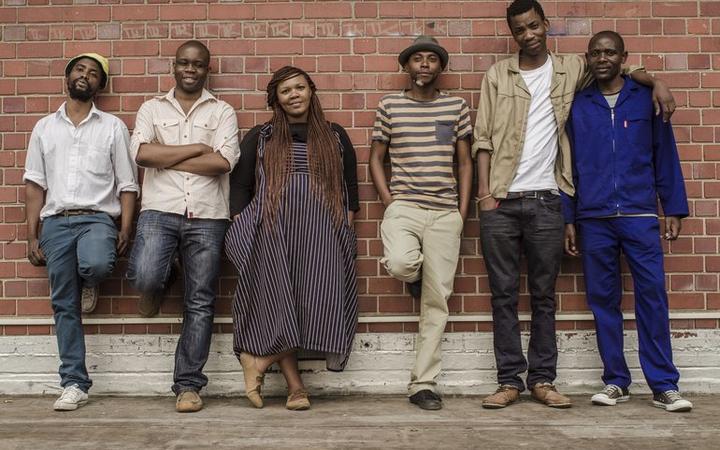 A project that has been percolating for years was finally served up this month.

The album is called Keleketla! after a Johannesburg arts centre, the Keleketla Library, which is where the project began. A workshop space used by different groups of Johannesburg musicians, the library put out an invitation back in 2017, via the charity In Place Of War, to the London electronic dance duo Coldcut, to visit and perhaps work with some of the resident artists. Already well versed in African music, up for an experiment and possibly a risk, they went for it.

There’s stuff going on here that felt immediately familiar to me, among them the drumming, which I thought could only be Tony Allen, the great prolific Nigerian musician who died in April, and checking the credits I see I was right.

Yet there’s also much I had never heard before, certainly not in these combinations. On’International Love Affair’ you can hear, layered over a kinetic African groove (again with Tony Allen in the driving seat) the horns of Brooklyn New York Afrobeat ensemble Antibalas along with the voices of some of the South African singers from the Keleketla workshop. There’s also some classic organ by Dele Sosimi, who like Tony Allen is a veteran of Fela Kuti’s band. On this track, the groove is perhaps a little more straight ahead, punctuated by one of Coldcut’s hard-to-identify rhythmic samples.

“Shepherd Song” might be a South African folk song with its beautiful simple melody, which the singer floats like a feather over the deep insistent rhythm.

Percussion, guitars and basslines bubble playfully, the pulse remains consistent, while an almost uncountable number of voices, all richly characterful, take turns on the mic. And not all of them even come from South Africa. The final track, ‘Papua Merdeka’, is centred on a speech by Benny Wenda, Oxford-based spokesman for the freedom movement of West Papua.

That’s got to be world music, by any definition. And it’s by no means the only time the music here gives itself over to a political statement. Perhaps the message of the whole thing is best summed up in by Californian jazz poets the Watts Prophets in a wonderful track called ‘Freedom Groove’.

We can all think of projects where, in spite of good intentions, the result has seemed like a kind of musical colonialism, with white producers using someone else’s cultural riches to add spice to their sound. But it doesn’t feel that that’s what’s happened here, perhaps because in this case it’s the white guys who were the invited guests. The microphone is shared liberally, freedom is the message, musicians from different continents merge as though it was meant to be, and Coldcut just do what they have always been very good at. 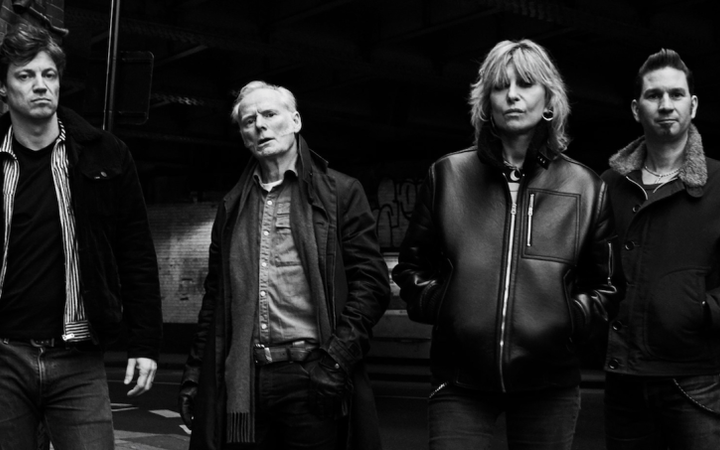 Hate For Sale by The Pretenders

Chrissie Hynde doesn’t seem to to be someone with a lot of romantic illusions, and she certainly has none when it comes to rock’n’roll. Which might be why, in a weird way, she is still one of the most convincing rock’n’rollers around.

The Ohio-born Hynde formed The Pretenders in London in 1978 and has been the one constant member for the four-and-a-bit decades since. Their new album rocks, it rolls, and it sounds just like the Pretenders, though only Hynde and drummer Martin Chambers - returning for his first Pretenders album in eighteen years - remain from that self-titled debut. It is called Hate For Sale and the title track sets the unromantic tone as Hynde delivers gimlet-eyed depictions of male entitlement. The guy who “takes and gets whatever he likes/women, cars and motorbikes” - and who she literally calls a wanker in the final verse - could almost be the same one as the ‘Turf Accountant Daddy’ she serenades in ‘Turf Accountant Daddy’.

Though these poison pen portraits are timely and, you could say, political in their own way, they are not aimed at the big obvious targets. The figures in these songs are more like the little Trumps and Weinsteins that command and bully their own mini-empires. But it’s not just men that are the target of Hynde’s terse verses. Women’s vanities can get her going too, like the one in the withering ballad she calls ‘You Can’t Hurt A Fool’.

I think I’ve counted four basic types of Pretenders song before, and they are all represented here. In fact they knock off three of them in the first three tracks alone, including one of those rock-reggae things they pulled off so successfully with ‘Private Life’ on that very first album. And I don’t think couple of those in a forty-year history is excessive.

Hynde will be 69 in September and remarkably her voice is as clear and strong as it ever was, which is one reason Hate For Sale sounds so fresh and timeless. Another is that, in guitarist James Walbourne - who has been with the band for about a decade now but has only featured on one previous album - she’s found perhaps the best foil she’s had since the late James Honeyman-Scott, who helped create the group’s original twin-guitar template. Within five years of the group’s formation both Honeyman-Scott and bass player Pete Farndon were dead, and perhaps they were somewhere in her thoughts when she and Walbourne were collaborating on another of these straight-shooting, unsentimental broadsides. ‘Junkie Walk’ is bruisingly direct.

And then there’s ‘The Buzz’, maybe the hookiest track in an album hardly lacking in hooks, in which Hynde and Walbourne really make those guitars buzz, or at least jangle euphorically. It’s a love song, of sorts, though love - as she notes drolly in the song, is “a drug like any other”.

Hate For Sale is a tough, sometimes darkly funny set. If you’ve read Reckless, Hynde’s autobiography from three or four years back, you’ll know that she can be as unsentimental in prose as she is in verse. She allows herself just the odd moment of compassion, though, and perhaps because it’s so rare it feels all the more earned. On this album it comes right at the end. Though it contains a bit of a brush-off to feminists, it’s a song only a woman could sing; perhaps only one who has seen what Chrissie Hynde has.