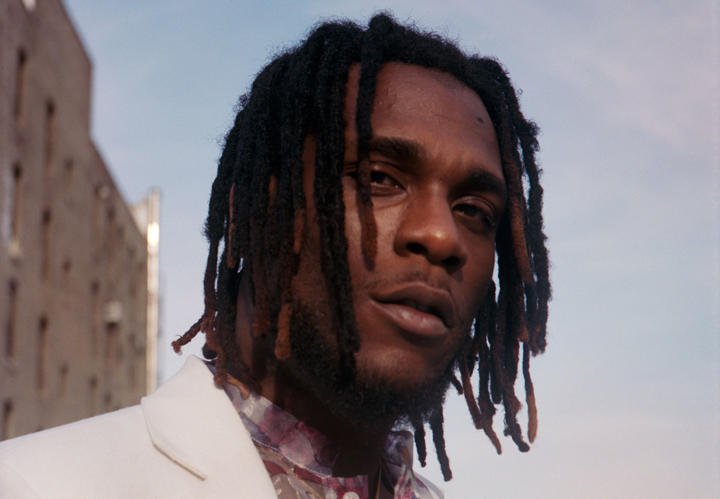 Burna Boy is is a 28-year-old singer from Port Harcourt, Nigeria, who has carved a commercial niche in his own country  and is now taking on the rest of the world with his mellow hip-hop-informed style of dancehall pop.

He’s a lover’s rocker or quiet stormer with a gentle gruffness to his voice, which he runs through an Autotune in the Drake-approved manner. Though his music is directed at the whole world, Africa is central to his thinking, whether it’s the subject of his lyrics or the way he takes traditional African polyrhythms and repurposes them for a world of midi’s and quantisers.

But for all his modern sensibilities, Burna Boy has some pretty traditional roots, and in a track liked ‘Anybody’ I’m reminded of his great compatriot, the late Fela Kuti - not just in the rhythm, which is a kind of drum-programmed version of Fela’s patented Afrobeat, but even the saxophone that bubbles throughout the cut in a familiar Fela style.

But Fela was an outspoken political agitator. What is Burna Boy’s platform? The title track gives a hint with its inherent statement of cultural pride. But the politics sometimes blur into a more generic boasting about his prowess as a Casanova.

As for ‘Dangote’, it’s a little ambiguous what Burna Boy is saying by making a chorus out of the name of Nigeria’s wealthiest man. If Fela was singing it, he would no doubt be insinuating corruption in high places, but here the message seems to be simply that for most people, however hard they work, life remains a hustle.

His singing, though, is always strong, as he slides between English, Yoruba and a Pidgin dialect that is perhaps the most engaging of all.

African Giant is appealing and well produced, the intrinsically African rhythms bringing a welcome lightness and freshness to the hip-hop matrix. He’s a good singer too, with a warm and witty persona. Even so, there is a certain repetitiveness that characterises this generous 18-song set, and by the end of it I am hanging out to hear a real talking drum - and maybe a little less of the old Autotune. 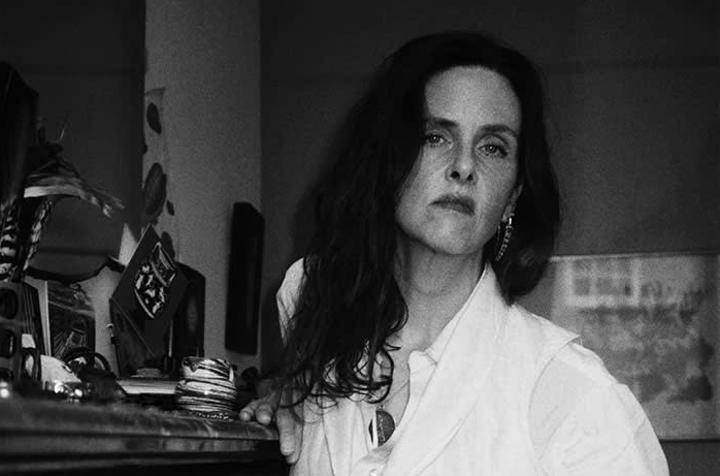 La Vita Nuova is Maria McKee’s first album in more than a decade, and I doubt you’ll hear a more uncompromising album this year. It teeters on the brink of grandiosity, yet never apologises or loses its nerve. It is clear that it is exactly the album McKee wanted it to be, and it owes nothing to any other music that is being made at the present time. Its antecedents are all deep in pop’s past.

It certainly has little in common with the music with which McKee made her name. The Los Angeles-born singer was still in her teens when she co-founded and fronted the fashionable cowpunk outfit Lone Justice, and though it sometimes seemed like she had been shoehorned into a style and the records suffered from the overproduction of the times, it was clear from the start that she was a terrific singer: a tiny frame housing a gigantic voice.

That voice hasn’t lost any of its power in the intervening years, though you won’t find a trace left of the teenage cowpunk. Instead you will find an approach that is more European, at times almost operatic, and a set of songs steeped in classical art and poetry.

The album’s title is borrowed from the book by Dante Alighieri, in which the medieval lyric poet expressed his idealised and unrequited love for the woman Beatrice. This thirteenth century work, which was subsequently the inspiration for the pre-Raphaelite paintings of Gabriel Dante Rosetti (who was named after the original Dante by his Dante-scholar father). Gabriel had his own obsessions, and it has been noted that his relationship with the model and painter Elizabeth Siddal in some ways paralleled that of Dante and Beatrice.

Moving ahead a century or two, Maria McKee has picked up on this archetypal love story and, finding parallels in her own life, has created a very personal set of songs that refer at different times to the original text.

In a sense, what McKee has done is write an epic lyric poem of her own. The words can border on the florid - McKee certainly doesn’t employ the traditional language of pop music - and there are moments where it feels as though the melodies are buckling under the weight of the lyrics. But often the tunes soar, even when they are supporting an unfeasible mouthful.

I hear overtones of Bowie, but the record as a whole might have more in common with Bowie’s hero, the late Scott Walker who abandoned a successful pop career for one of art song. And with the repurposing of big classical themes and allusions to Romantic poets like Blake and Yeats, she fearlessly treads into areas where pop stars can, if they are not careful, look like prats.

McKee's half-brother Bryan MacLean was - along with Arthur Lee - guitarist and songwriter in the seminal 60s Los Angeles band Love, and the album’s most ‘pop’ moments are the handful of guitar-based songs which recall Love’s sparkly folk-rock. The raga-toned ‘Page Of Cups’ has its roots in the joss-stick scented 60s.

Mostly though, McKee, who has lived in the British Isles for many years now, draws on British influences, and not just the Romantic poets. A song like ‘Right Down To The Heart Of London’ has a tune that might have its origins in Scots-Irish folksong.

Untangling and interpreting the narrative of this song cycle would require more space than I have here. The lyrics, in print, run to more than four-thousand words. Enough to say that McKee, whose long time marriage broke up recently and has subsequently declared herself a “pansexual, polyamorous, gender fluid dyke”, has reached a point in her life where she has much to reflect on and much to say about it, and there’s a deep strain of self-examination that runs through the record. It’s not the kind of music you throw on in the background. Over an hour in length, it has the formality of a recital. But having released no new original material in thirteen years, she is clearly no longer interested in bending to anyone else’s wants and desires. If she’s going to make a record, it’s going to be her own, pure and undiluted. And La Vita Nuova - prolix and preposterous though it may be - is an album no one else was qualified to make. 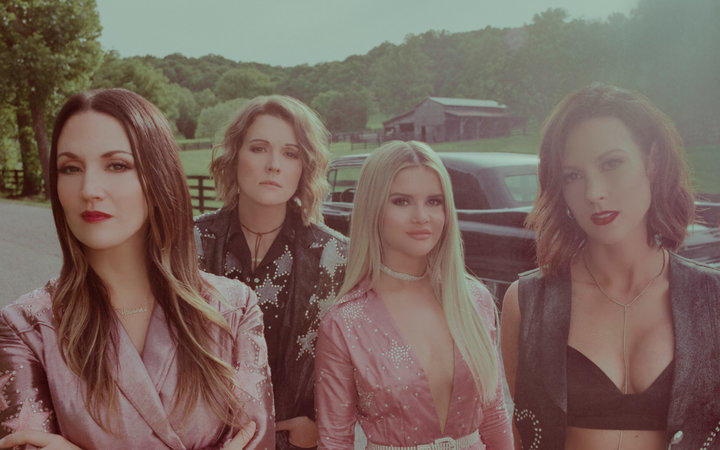 The name is, of course, a play on The Highwaymen, a successful conglomerate of ageing male country icons pulled together at a time in the 1980s when their individual stocks were low. And a similar principle is in practice here.

Though none of these artists have ever had quite the mythic status of a Johnny Cash or a Willie Nelson, the four Highwomen are all well-established individuals: Brandi Carlisle, Natalie Hemby, Amanda Shires and current country chart-topper Maren Morris. Pointedly, they fall outside the demographic favoured by country radio. For a start, they are not men, and it does seem to have been a particularly hat-and-beardy decade in mainstream country. Even more significantly, of the four, only Morris is still in her twenties. Country radio’s ageism might be even stronger than its sexism. So there’s both a political and a commercial point being made.

If the album has a unifying theme, it’s the acts of strength and courage by women that so often go unacknowledged. And that is most forcefully expressed in the title track: a Carlisle and Shires rewrite of Jimmy Webb’s original ‘Highwayman’ song, that is pointed and political: Sandinistas, Salem witches, freedom riders. You get the idea. More often, though, the politics are diluted with humour and the effect is more upbeat and ironic, as in ‘Redesigning Women’.

‘Loose Change’ sounds like a rootsier cut off a Marin Morris record, while a bittersweet vignette like ‘Cocktail and a Song’ is typical of the prolific, fiddle-playing Amanda Shires.

The Highwomen is a slick and entertaining album with a point to make. And producer Dave Cobb, who has manned the desk for big albums by the likes of Sturgill Simpson and Chris Stapleton, brings his signature rootsy-not-quite-retro sound to the whole thing. And yet I found it all a little disappointing. While the singers bolster each others performances with immaculate harmonies, you seldom get the sense they are making something greater than the sum of the parts. Unlike, say, the great Parton-Harris-Ronstadt Trio album from back in the 80s, this one seldom exceeds expectations, or touches me all that deeply. And the sincerity that marks its better moments is undercut by a feeling of formulas being applied. I’ll keep listening to these artists’ individual records though, and I’m glad I went back and checked out this collaboration, even if it’s not one I’ll be revisiting all that often.