Kentucky singer and songwriter Tyler Childers will be visiting here next year opening shows for the legendary John Prine. Nick Bollinger caught up with the 27-year-old in a Minneapolis car park. 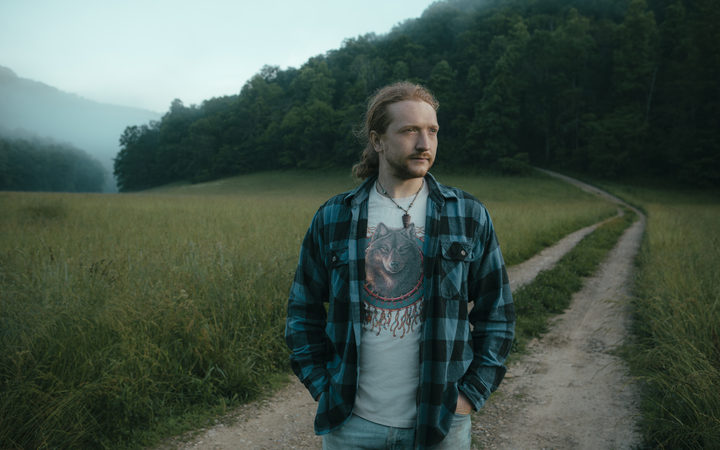 ‘Authentic’ is a word that is often misused, but if anything deserves the term it’s the music of Tyler Childers.

The 27-year-old Kentucky singer and songwriter will be visiting here next year opening shows for the legendary John Prine.

Childers’ authenticity lies partly in the fact that he comes from East Kentucky, in the cultural region known as Appalachia where so much of the music identified as country originally came from. He sings country music as though it’s his native tongue, which in a real sense, it is.

Childers’ music might seem like a throwback until you realise that the stories in his songs are taking place in the present, and it’s not pretty. They are populated by desperate characters who drink, take a lot of drugs and sometimes do dreadful things, like the narrator in the song he calls ‘Banded Clovis’ who goes digging in the mountains for Indian arrowheads to sell for drug money and winds up committing murder.

When I speak to Childers he is two-and-a-half weeks into a five-week tour, standing in a parking lot just outside Minneapolis. “They got a nice Kingdom Buffet here, a Starbucks, a County Market, a Home Depot, Walmart,” he tells me in his relaxed Kentucky drawl.

“I went into the Home Depot and looked a bonsai trees for a little while. Thought I might get one to spruce up the bus, but they looked a little… well, it wasn’t the bonsai I was going for, so…”

It’s the same conversational tone that permeates his songs. I ask if he always writes with actual people and places in mind?

“Often, yeah. I write with my friends in mind a lot of times, whether they are just made up stories or stories that are based on tales and people that my friends back home would know.

“I guess because of that it usually comes off as from that place, which is what I hope for, what I shoot for. I strive to be an Appalachian artist, an Appalachian writer, and so if it sounded like it was coming from somewhere else I’d not be doing too good at that goal.”

The Appalachian region Childers comes from has an extraordinary tradition of music. But is it something that everyone there grows up knowing about these days or does one have to actively seek it out?

“I think that nowadays it would be easier for you to be oblivious to it than it used to be, certainly. But in my case it was something that was a point of pride in my family all were field Baptists, and the churches I went to the singing was just as important to the liturgy as the sermon. And something that I really enjoyed was singing and music.”

The church may have influenced his music, and yet his songs also deal with earthly matters of sin and temptation and it’s not always clear who is winning, or even whose side he’s own.

“I’m thankful I did come from such a religious background”, he reflects. “Because it created a base of ethics, of how to treat people and how to expect to be treated from other people and just the golden rule of ‘don’t be a jerk’ and that’s something that not all of my friends grew up having, this moral compass.

“At the same time too, especially the field Baptist churches grew up in, I think that’s a terrible place for a child. You take this kid at least once on Sunday, sometimes Sunday night and if you have time you take ‘em on Wedneday, so three times a week you take this kid and sit them in front of this really angry screamy shouty preacher talking about hell fire and brimstone and how if you mess up then you’re going to burn forever, it’s like taking your kid to Ghost Story time, like three times a week. But it instils this – not just, you better be good out of love but you better be good or you’re going to burn forever and ever and ever. And it’s like you’re scared to death.

“You know, I don’t wanna go to hell and at least in my path in life I’ve ended up getting a guitar and playing music and meeting quite a wild bunch of heathens and getting into all this trouble I’d been scared to death to get into and then just the way that whole tornado of rebellion and the contrast of it in my own mind, it’s like a dark feeling, like you’re feeding something. I guess it’s like the whole idea of southern gothic, this mix between the moral and amoral.”

With industry closures and high unemployment, the Kentucky that Childers comes from is one of the southern blue-collar regions that seemed to pin its hopes on Donald Trump. After two years of Republican leadership I wondered whether anything had changed?

Childers answers with a succinct “No.”

Then he expands. “Coal put food on my table growing up. My dad was a coal miner most of his life and most of my life until the bottom fell out and you couldn’t find a job. But just because my Dad can’t find work in a field that is all he’s ever known, that can’t keep me blinded to the idea that the only thing that’s going to bring coal back is 27 million years of not touching it.

“The reality is, you build an economy on extraction, if Johnny has four apples and Johnny eats four of his apples Johnny doesn’t have any more apples and we’re getting to the bottom of coal seams and its not a long game, there’ got to be an end. What’s ended up happening and happens all the time, it happened before Trump got in office, is they’ll open up some coal mine that’s shut down and put 200 people to work, put it in the paper. It gets everybody hopeful, things are looking up and then it’ll shut down and they’ll blame it on regulation and that’s not true. What really happened is you guys were doomed to close the minute you opened, it was all just for show, to keep people holding on.

“And coal’s taken a lot of our wealth of minerals from the communities without giving anything to it. A lot of that money goes to bigger interests in bigger cities like Lexington and Frankfort and Lurvall and it’s not giving anything back to the community, nearly as much as its taking.

And scary a thing as it is to say, as a people we’re at a pretty important part in our history where we’re gonna have to reidentify ourselves. It’s not something we’ve not done before. Oftentimes we get really caught up in this identify of being coalminers but before that we were loggers until they’d taken every last good piece of timber we had and had to change us into something else. And before that we were frontiersmen. We’ve always had times where our identity has changed and it just so happens we’re at that point in history where we’re gonna have to change and you know, change is scary. But I’m hopeful.

“You know, we’ve got really good soil for growing pot and a lot of people have made quite a under-the-table honest living out of growing weed and hemp, we’ve got really good soil for that, and maybe we could be on the front end of all this new opportunity in the state and be progressive enough to start passing bills to make it possible for people to grow hemp, grow weed. And if we start growing hemp we could people to work in textiles and all kinds of stuff. And with high unemployment rates it can’t hurt to try.”

Talking to Childers, like listening to his songs, makes the title of his album Purgatory seem extraordinarily apt.

“Yeah it seemed to fit pretty well from a few different angles. Certainly, as we’ve been sitting here talking about back home in the region that gave birth to the idea for these songs we are in this middle ground between heaven and hell, like hell with hope.

“I’m 27 now, I’ve been gigging and playing out in bars and on the road since I was nineteen and a lot of that time I was trying to get ahead, trying to get heard, crashing on couches wherever I could and oftentimes that’s felt like it’s own little purgatory."