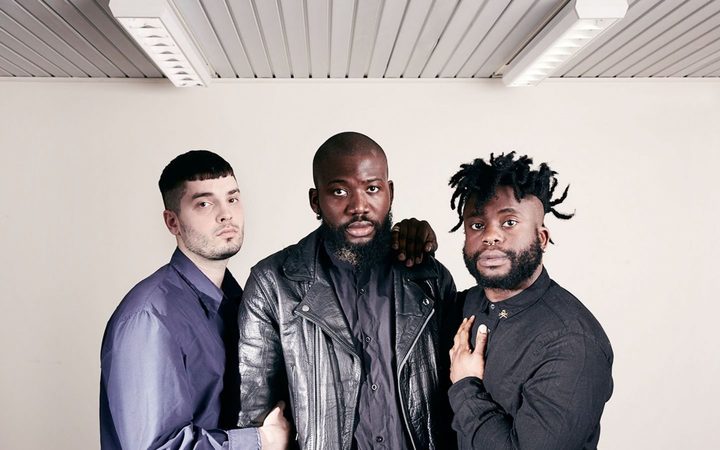 When you think of music with ties to hip hop and the African diaspora, you probably don’t think of Edinburgh, Scotland. But when it comes to Young Fathers, we’re about five hundred miles from the likes of The Proclaimers.

Two members of the band have African heritage. Alloysious Massaquoi was born in Liberia, and Kayus Bankole has Nigerian parents, and the band’s music is coloured with percussion and chants that bring to mind the continent’s musical legacy.

First single 'Lord' was a jubilant indication of what to expect from the album. It’s also a good example of the band’s secret weapon, which they employ sparingly - the cumulative gorgeousness of them all singing at once.

They operate primarily as a vocal trio. On stage it’s just them and a backing track. But that’s more than enough. They flip between singing, rapping, and everything between. On songs like 'Holy Ghost' the influence of genres like UK grime and American hip hop are more obvious.

Cocoa Sugar has a more focused, stripped-down sound than the cluttered production on Young Fathers’ first two albums, but there’s still a strong punk edge running through the music. That’s due in part to the way it’s made.

I interviewed Graham a few years ago when the band played a show in NZ, and he explained their process. They generally make a song in a day, from writing through recording. I told him it’s apparent in the songs' roughness around the edges. He laughed, before conceding that he agreed.

For Cocoa Sugar they were joined in their Glasgow basement studio by TV On The Radio producer Dave Sitek, who’s worked with artists like Bat For Lashes and Santigold. But there’s still a strong sense that what you’re hearing is what was cooked up and captured on the day, imperfections be damned. When they get as exuberant as they do on the song 'Toy', it can feel like they’ve forgotten about the mics all together and we just happen to be privy to a singalong.

Young Fathers are outspokenly political, and they love to provoke. In the music video for 'In My View' they end up deconstructing the idea of a music video, explaining to the viewer how they used the medium to lure them in. It reveals the commercial imperative behind the art, and it’s a good example of how the band’s honesty can start to tip into something like nihilism.

These are, after all, the guys that called their last album White Men Are Black Men Too in an effort to provoke a response - any response.

And racial politics are still present on this album. How could they not be. Alloysious and Kayus have spoken extensively about growing up black in Scotland, which is hard not to think of when you hear lyrics like “Don’t you turn my brown eyes blue. I’m not like you. I’m nothing like you,” in the song 'Turn'.

Later in the verse Kayus says “I didn’t work this damn hard to stay where I belong.”

And that’s what emerges as the prevalent theme of the album. 'In My View' tells us, “In my view nothing’s ever given away,” and the importance of earning your lot in life becomes something of a refrain, crystallised in 'Wow', when the ban howls, “Ego! Keeping me on/ Giving me what I need.”

The album is made up of hundreds of details of like this, and part of the fun is sifting through it all trying to get a handle on it. Young Fathers often shun any sort of verse/chorus structure in favour of letting songs drift where they may, in a way that feels carefree but never careless.

Cocoa Sugar isn’t immediately accessible, but repeat listens prove it to be surprisingly coherent. Its other lyrical preoccupation is religion, with lyrics about god dotted like breadcrumbs throughout the album, leading to its final track 'Picking You'. Here, questions of faith butt up against that idea of working hard for something you want, and when the band sing, “You’ll never find your way to heaven,” the implication is clear: you have to earn it.