Goths by The Mountain Goats 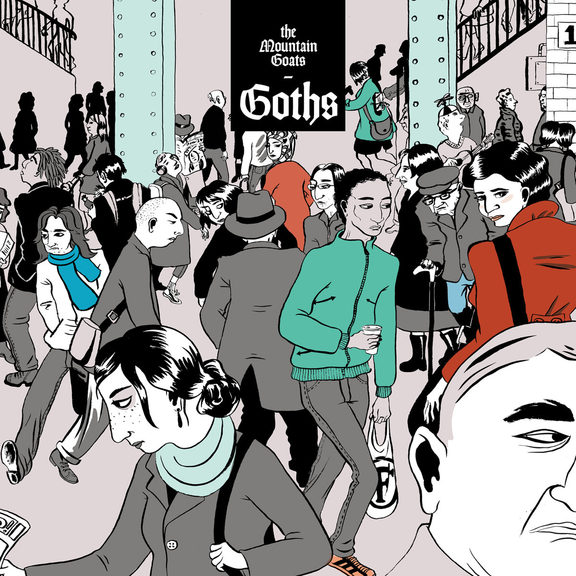 With the Nashville Symphony Chorus sounding like they are in Westminster Abbey, and John Darnielle singing about castles and batcaves, the opening track on Goths is gothic by definition.

But that is about as gothic as The Mountain Goats get on Goths, and while they try a few new musical tricks on this album you would hardly mistake it for The Sisters Of Mercy.

Thematically, though, they stay on point. In fact, the next song is all about The Sisters Of Mercy, and depicts their frontman and archetypal goth icon depicts Andrew Eldritch returning to Leeds, the city where his band formed in the 1980s.

Though the music is springy and bright and John Darnielle’s delivery almost jaunty, there’s pathos in images of ‘a club nobody goes to with a musty velvet rope’, and a ‘rusted fog machine in a concrete storage space’.

It adds up to a picture of a scene that’s been left to gather dust as time and fashion move on. We know it’s over; Darnielle almost seems to be laughing about just how ‘over’ it is. And yet it’s hard to miss the nostalgia in these lines.

The goth culture that sprung up in the 80s coincided with Darnielle’s teenage years, and these pictures of faded goth-dom are drawn with real affection, as though he might be gently counselling a version of his teenage self.

In one song we are rummaging through a goth’s memorabilia from a mid-80s heydey; in another, we get to stand in the platform shoes of an ageing rocker, still on the road, though the crowds have stopped coming. He doesn’t even get the way people dress these days, and it’s evident that they don’t get him. “Nobody wants to hear the twelve bar blues/from a guy in platform shoes”.

If these songs are more personal than they appear, they are also close to caricatures; funny and sad, yet never digging as deep as Darnielle did on The Sunset Tree, the highly autobiographical album he made after the death of his abusive stepfather, and arguably his greatest work.

In recent years, Darnielle has turned his attention to prose; his first novel Wolf In White Van was published in 2015 to great reviews, and a second book of fiction Universal Harvester came out just this year. But characters and narratives have always been a feature of his songwriting. You often get the sense that the people in his songs are trying to retrieve something that’s been lost.

Lately he’s been dwelling on subcultures that, if not exactly extinct, will never again be what they were. Their last album Beat The Champ was a series of vignettes about the vibrant subculture of regional pro-wrestling, which Darnielle he was drawn to in the 80s. These gentle odes to lost goths pine for a similar time, and you could hear them as a variation on the same theme.

If there’s little that’s actually gothic about the music on The Mountain Goats’ Goth, neither is it quite what one would have found on an earlier The Mountain Goats album. Initially it all revolved around Darnielle’s guitar, which he strummed furiously even when he was playing the kind you didn’t plug in. Over the last few albums they have consolidated into a regular quartet, with bass, drums and – most recently – multi-instrumentalist Matt Douglas. And, remarkably, Goth features no guitar at all, with Darnielle playing mostly electric piano.

The sound has become slicker, sophisticated, almost jazzy at times. By the time we get to the final track the Goats are swinging soulfully in a style curiously reminiscent of Van Morrison; only the song is a wistful tribute to forgotten 80s goth-rockers Gene Loves Jezebel. I doubt that’s a subject Van Morrison would ever have thought of writing about, but I’m glad Darnielle did.

Goths is available on Merge. Stream the full album on Spotify:

Singer and songwriter who performs as The Mountain Goats, and has just written his debut novel, Wolf in White Van. Audio

John Darnielle sets poetry to music as the leader of American indie outfit the Mountain Goats. Since he began the project in 1991, his work has gained a cult following, partly for his ability to cram… Audio

John Darnielle of Mountain Goats, who was named in the New Yorker as the best "non hip-hop lyricist" in America, performs a session in the Music 101 studio. Audio