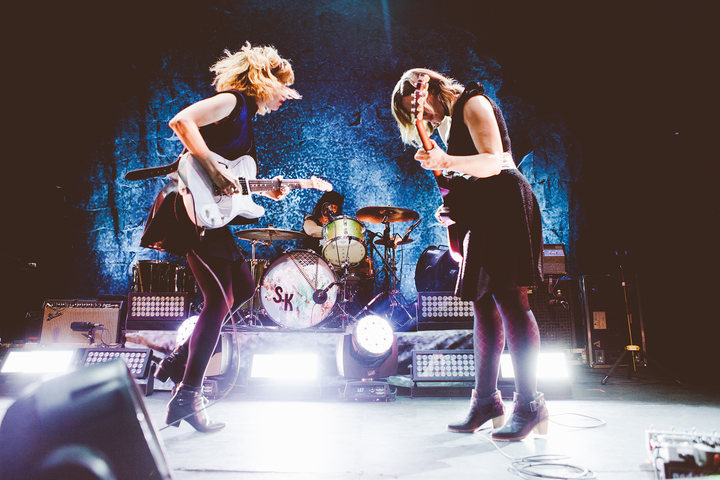 When this group re-formed after a decade-long hiatus it wasn’t the usual case of cashing in on a popular back catalogue, but rather a band picking up their guitars and drumsticks right where they dropped them. 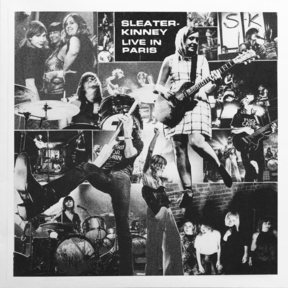 ‘Price Tag’, a song that first appeared on Sleater-Kinney’s 2015 reunion album No Cities To Love, opens their latest release Live In Paris, and it comes out swinging. All the things that defined this power trio the first time around are as present and powerful as ever. The way Carrie Brownstein’s bright snapping chords burst through Corin Tucker’s staccato riffs, the laser intensity of Tucker’s voice and indomitable rhythm of drummer Janet Weiss.

All three members of Sleater-Kinney kept creatively busy during the long layoff, with Weiss drumming for various bands, including Stephen Malkmus and The Jicks; Tucker fronting her own Corin Tucker Band, and Brownstein playing, writing, acting and creating the TV sketch series Portlandia.

But this is the first time since the trio first came together in Olympia Washington in the mid-90s that they have ever released a live album, and it confirms what anyone who has ever seen them on stage already knows: that they are one of the great two-guitar bands. Somewhere on the continuum between The Rolling Stones and Television there’s a space that Sleater-Kinney have claimed and made their own. And the absence of a bass, while curiously taking nothing away from the music’s power, adds to its unique brittle urgency.

The ‘live album’ often functions as a retrospective or greatest hits package, and Live In Paris does revisit a few of the signature tunes from Sleater-Kinney’s first decade. Joey Ramone was still a living punk god when Sleater-Kinney first recorded ‘I Wanna Be Your Joey Ramone’, but the song proves to be immortal even if its subject is not, while from a little later – in the early 2000s – comes ‘Oh!’, the great power-pop hit they never had.

But by far the bulk of these songs are from the recent No Cities To Love, and the album that preceded it, The Woods, underlining the fact that there is nothing nostalgic about this reunion.

Sleater-Kinney have always moulded their music around strong lyrical statements. 'Modern Girl' – sung by Brownstein – was so good that she just had to recycle it in the title of her 2015 memoir Hunger Makes Me A Modern Girl. But if the song is political, so is the group’s very existence. Asked in an interview, around the time of the reunion, ‘Does rocking hard mean gender equality?’ Tucker noted that it was question people had tried to ask in different ways, but that that was probably the best way it had ever been put, while drummer Weiss simply answered with a definitive yes.

The whole album was recorded during a single-night at Paris venue La Cigale, somewhere in the middle of a long tour around No Cities To Love’s release. I wonder what made that particular gig stand out from the rest? Still, by isolating a single performance rather than cobbling a live disc together from multiple shows, as bands often do, there’s a continuity of mood and dynamics that you can feel. Then again, I’m sure you could have picked almost any night and you would have heard one of the great guitar bands, rocking hard.

Live In Paris is available on Sub-Pop Records.