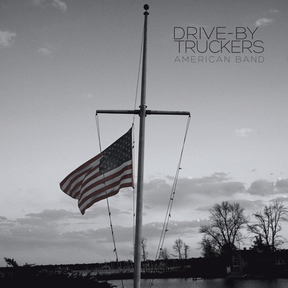 Times of crisis often fuel a country’s creative output. Popular music is littered with examples of great songs resulting from strife. From Billie Holiday's “Strange Fruit” to Crosby, Stills, Nash and Young's “Ohio”, great songs have been made with the energy created by political and racial tensions. Listening to American Band, the latest effort from Drive-By Truckers, it’s clear that the current political turmoil in their home land has played a huge part in the making of this record.

Drive-By Truckers are no strangers to dealing with the struggles of their home and even more specifically, the south. They have written songs for years that both praise the good (Sam Philips and Sun Records, the region's rich musical heritage in general) and decry the bad (racism, clinging to a history of oppression as a cultural identity). Taking cues from the two main songwriters Mike Cooley and Patterson Hood, the Truckers are a smart band with a decidedly liberal point of view and a sharp sense of humour. They’re unafraid to handle the, as they put it, "duality of the Southern thing."

Right from the start Mike Cooley comes out of the gate swinging and pointing fingers. “Ramón Casiano” takes aim at Harlon Carter, the man who in large part was responsible for turning the NRA into the political force it is today. Carter focused the organisation’s energy on opposing gun control legislation, directly leading to the current state of US gun laws as well as the huge, contentious debate around them. Carter was also responsible for the 1931 murder of 15-year-old Ramón Casiano, before later becoming a border patrol agent in Texas. Looking at these events and the American right’s current stances on both guns and border security Cooley sees similarities. “It all started with the border” he says, “and that’s still where it is today”.

“Ever South” is a tale of what it means to be an immigrant to America. Describing the arrival of his ancestors from Ireland and Scotland, Patterson Hood details how they were at first unwelcome as outsiders with their “drunken, fightin’ ways” but, moving south made a place for themselves and as generations progressed, grew into a family of proud Americans and even prouder southerners. How, Hood asks is the story of his family, different from that of one from Mexico or Syria, who simply want a new life for themselves?

The resigned tone of “What It Means” says almost as much as the lyrics. It’s a lament that even in this time of human progress and advancement, racism is still so prevalent and ingrained in the US. "We're living in an age where limitations are forgotten / The outer edges move and dazzle us / But the core is something rotten." What does it matter if we’ve come this far but there are still constant stories about young black men who have met the same fate as Treyvon Martin and Michael Brown?

Intriguingly, given the band’s interest in the "duality of the Southern thing" this record has a dualistic quality to it. Cooley’s songs are more angry and jeering. Hood on the other hand is more melancholy. Still angry, but more reflective and saddened by the state of affairs.

American Band is a record fuelled by reaction to the current climate, but without the hurried ill thought out feel of a record like Neil Young’s Living With War. The well crafted songs and great musicianship that this band are known for are strongly displayed here and “Ever South” and “Ramón Casiano” are worthy of a place amongst the Drive-By Truckers most revered songs. Musically American Band ranges from big, rocking guitar riffs to Americana Country and covers most ground in-between, areas that Drive By Truckers know very well.

This is a record filled with anger and sadness. It’s a vital record in the sense that the emotions are palpably raw at times. But man’s inhumanity towards man, the sense that many people are refusing to recognise, let alone deal with, the root causes of some of America’s most pressing problems and the idea that some are even trying to exploit them, are never going to be subjects that make for a cheerful record. The daily onslaught of what’s going on in the U.S.A is bound to have an effect on any musician paying attention and it seems that Patterson Hood and Mike Cooley are both keenly aware of that.