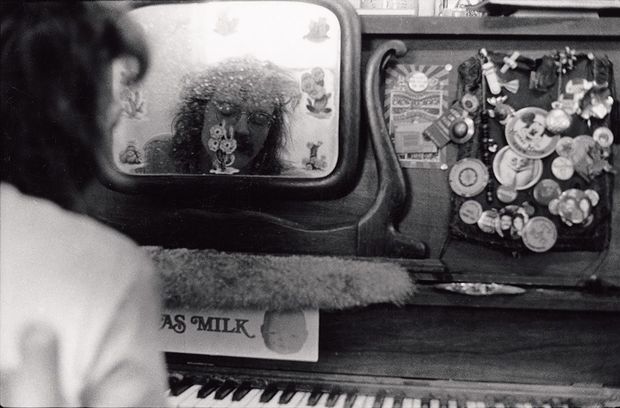 There are many ways of telling a tale, and the American artist Terry Allen has used more than a few of them in his time. Now 73, this painter, sculptor, songwriter, dramatist and musician has made his living from a combination of all these things ever since he left his hometown of Lubbock, Texas in the early sixties. And he draws on all of them for the mysterious tale that has been central to his life’s work.

Allen calls it Juarez: A Simple Story. It was the basis of his first album, which was first released just over forty years ago, has been revisited a number of times in a number of ways over the subsequent years. Now it has been re-released in a model reissue, with illustrations and essays that put the whole thing in its historic and artistic context.

Allen introduces the four main characters and gives a brief outline of the plot right near the start of the record. But that barely describes the real action in this tale, which seems to span centuries and civilisations, and takes place largely in the minds of the characters – who aren’t really characters in the usual theatrical sense. Rather, they are archetypes, or, in Allen’s own words “emotional climates or atmospheres in a state of dispossession.” The song ‘Cortez Sail’ begins with the character known as Jabo driving (‘probably a Buick’) out of Los Angeles, but segues into the saga of the Conquistador Cortez and his brutal conquest of the Aztec empire.

The relationship between that bloody historical tale and Allen’s more low-rent 20th century one is never entirely clear, though the former might foreshadow in some symbolic way the bloodshed that follows. Yet in spite of the violent denouement, there is romance along the way.

Allen is a magnificent, poetic lyricist, and wraps his unreconstructed Texan drawl around songs full of detail and wordplay.

But he has many skills. And as the long accompanying essay by Brendan Greaves reveals, the starting point for this project was a set of drawings Allen produced in the 1960s when he was fresh out of art college. Some of these are reproduced here, along with Greaves’ essay, and they are beautiful and surreal. Allen would travel with the visual works, and sometimes perform the songs in the galleries where they were exhibited.

Eventually he made the recordings contained in this album. They are plain: mostly just Allen at his piano, which he plays in a thumping honky-tonk style, joined occasionally by one or other guitarist.

Terry Allen has made a lot of records since Juarez, some more musically sophisticated. ‘Cantina Carlotta’, first heard as part of Juarez, reappeared in the 80s on the record Bloodlines, where Allen was accompanied by the Panhandle Mystery Band, led by the great Lloyd Maines (father of the Dixie Chicks’ Natalie Maines.) On another disc he was joined by Indian musicians, especially appropriate for his song ‘New Delhi Freight Train’, a surreal tale of Jesse James on the run that I first heard covered by Little Feat. He has also continued to work as a visual artist, and his works are held in many museum collections.

But Juarez remains the piece he keeps circling back to, as though haunted by it. The story, he says in the liner notes, didn’t present itself all at once but grew as the piece grew. He’s not even sure where it came from. ‘The characters’ he says, ‘came out of the drawings and the songs, but really just came out of nowhere.’ And listening to this, I’m thinking that might be where the best stuff comes from.

Juarez has been reissued on Paradise Of Bachelors.