Nick Bollinger reviews a reissue of a lost jazz-punk classic from 3 Voices.

These days, local releases are so thick on the ground it is practically impossible to keep track of them all. Back in the early 80s, it was a different story. Home studios were unheard of, and the few professional facilities were available only to those who could afford the eighty-odd dollars an hour they would typically charge. Which makes it remarkable that this record exists at all. 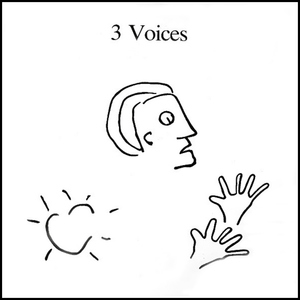 I first heard 3 Voices in 1983 and their sole self-titled album sounds as extraordinary to me now as it did then. The name might refer to the gentle humming that recurs through the deconstructed waltz of the same name, or to three instruments – the guitar, drums and bass – that move in increasingly abstract patterns around the melody.

Though there are actually more than three vocalists on the record, and a lot more than three instrumentalists, the group seems to have been an alliance between three players in particular: Rob Sinclair and Dave Bowater of the recently dissolved Schtung, and drummer Steve Garden, who after stints with Rockinghorse and Sharon O’Neill was beginning to be drawn in more experimental directions, like the ones the former Schutng-sters were exploring in compositions like these.

A number of the tracks capture a spiky, kinetic funk, slightly reminiscent of things the Gang Of Four or Talking Heads were doing around that time, though no one in those groups ever went quite as nuts on a synthesiser as somebody does in the song they call ‘Pest Control’.

But Bowater’s saxophones brought another ingredient again; one that had traces of New York avant-garde about it, and make me think of other early 80s phenomena such as James Chance’s Contortions or Lester Bowie’s Defunkt.

Though there’s an element of improvisation and jazziness about it all, the eleven tracks are actually all songs of roughly pop-length, mostly with words and sometimes even choruses – like the mis-shapen reggae of ‘Listen, Don’t Cry’.

3 Voices may touch base with several types of music that were in the popular realm at the time, but the combination was so idiosyncratic that the record sounded quite individual then and still does now. It also sounds a bit better now. Though the performances haven’t changed, the album has recently been remixed by Dave Bowater, and while I don’t have an original copy to compare it to, it seems somehow brighter and more dimensional than I remember.

3 Voices is a feast of quirky invention, underpinned by some serious musical chops. Steve Garden’s drumming, in particular, is marvellous: the rhythmic architecture on which the whole thing hangs. But the album is full of surprises, as ear-opening today as when this record was first released more than three decades ago. It’s available as a download, you can stream it, or you might even find an old vinyl copy if you look hard.

3 Voices is available on OHO Recording.