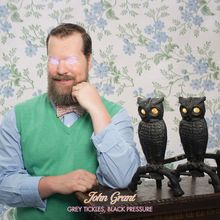 John Grant is in his late forties, gay and HIV positive, which doesn't make him unique but certainly informs his perspective. Factor in a Colorado upbringing in a family of Baptist churchgoers, years of depression and refuge in alcohol and drugs, and you’ll have some of the background to his new album. What that background might not prepare you for, though, is the self-deprecating strain of humour and it runs right through the record. That, in combination with Grant’s musical gifts, makes for a more entertaining package than one perhaps has a right to expect.

After a decade fronting  Denver’s alternative rock band The Czars, Grant launched his solo career five years with the acclaimed Queen Of Denmark,  which leaned heavily on mid-tempo ballads and centred on Grant’s piano and strong baritone voice. There’s still some of that here, but there’s also a good dose of early 80s dance music complete with squelchy synthesisers, and both are streaked with Grant’s dark yet unexpectedly humorous observations of the human condition – or at least the condition in which he finds himself.