No No No by Beirut

Nick Bollinger checks out the first offering in five years from Beirut. 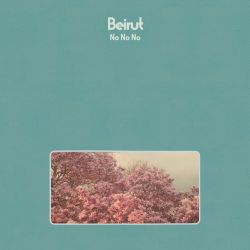 With the inimitable voice of Zach Condon, Beirut charmed almost everyone crazy with their breakthrough album The Flying Club Cup. Okay, we knew he was really an indie rock dude and the arrangements a clever composite of borrowed exotica, still the combination of those gypsy horns and Condon’s big romantic croon was pretty irresistible, and he managed to extend that gypsy fantasia for a bit longer on the belated follow-up, 2011’s The Rip Tide. But if the voice is still intact, there’s something else seriously missing from this new album.

The album is called No No No and I must confess that’s what I found myself saying when I first heard that track. Melodically it’s an echo of the sort of things Condon was writing eight years ago on The Flying Club Cup. But what might have formed the basis of some exotic fantasy has, this time, been turned into a slightly bland pop tune, the horns eased into the background, keyboards pushed to the front, and those faux-gypsy rhythms replaced with beats that might have come from an old Hall and Oates record.

To an extent I appreciate Condon’s dilemma; he understands the law of diminishing returns and doesn’t want to keep making the same Beirut album over and over again. No one wants to become a self-parody. The problem is, he doesn’t have enough to replace his old self with. The pop idea is not much more than that: an idea. Taken on its own terms, Beirut’s No No No is a pleasant enough offering. And at only 30 minutes in length it certainly doesn’t make any epic demands. My disappointment with really rests in the fact that eight years ago, listening to The Flying Club Cup, I heard a musical imagination that was seemingly limitless, and had begun to imagine myself what kind of exotic creations Zach Condon might dream up in the future. Instead, No No No just shows that that imagination might have limits after all.

Songs played: Gibraltar, No No No, August Holland, Perth, So Allowed, As Needed