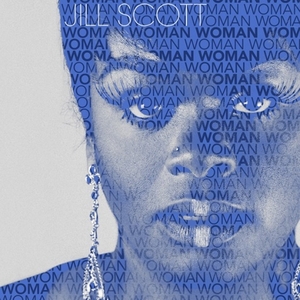 Jill Scott was heard most recently on Dr. Dre's Compton: A Soundtrack, an album that is like an avalanche of voices. But when it comes to singing, she can run rings around all of them.

If the sixteen tracks on Woman have a linking theme it's no more than the one the title suggests: life and all its vagaries, from a female point of view. Musically, it's all over the shop. Though the songs are all strongly identifiable as R&B, that could mean anything from a cool 80s Flyte Tyme-type production to a Motown pastiche. 'Closure' is a song that, if Scott hadn't written it then Sharon Jones surely would have, and it's a hoot, with the kind of mocking battle-of-the-sexes humour you could imagine in the heyday of the Apollo.

Something that has distinguished her since early on is that she is also a spoken word artist, which is not to call her a rapper; more like a performance poet. And there are a couple of spoken interludes in this set too, which, in a way, is where Scott is at her most distinctive. The variety might suggest that Scott isn't quite sure who it's aimed at, so is offers a little something for everyone, but if that's the case then my tastes must be unusually catholic because I find myself liking most of it very much.