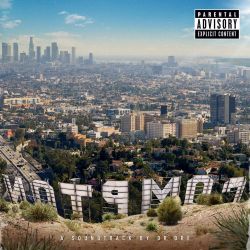 This month saw the release of Compton, the first album in sixteen years under the name of Dr. Dre, the veteran rapper, producer and pioneer of the genre that has come to be known as gangsta rap. Not that Dre has really been absent. During that time his production credit has appeared on blockbuster albums by the likes of Eminem and 50 Cent, he has launched his own brand of headphones (Beats by Dr. Dre) and last year sold the brand to Apple Inc., for a rumoured 3 billion dollars. Which begs the question, why would he feel the need to make another album at all? P-Money (Pete Wadams), New Zealand’s most successful hip-hop producer, suggests it is that “he just likes making music. Making billions of dollars, that’s all well and good, but there’s nothing like having a hit song.”

The release of Compton coincides with the release of the movie Straight Outta Compton, a biopic of the group N.W.A., of which Dre was a founding member. He also acted as an executive producer on the film. The album is not the movie’s soundtrack, though its style is cinematic. You could hear it as Dre’s own aural movie, rich in beats, soundscapes and musical hooks. Broadcaster and DJ Aroha Harawira says: “I was listening to the album and I was by myself at home. You generally don’t exclaim things out loud when you’re by yourself, and I was in my lounge and was like ‘Damn!’ to myself and turned it up really loud at 10.30 in the morning. Probably all my neighbours were really annoyed, but it just totally hooked me in.” She singles out the tracks Satisfiction and Genocide as particular examples of Dre’s production brilliance. Rapper PNC (Sam Hansen) picks the closer Talking To My Diary as a personal favourite. “That was reminiscent of the Dre I’ve always loved, and I liked what he was saying on that.”

Compton looks both to the past and the future, with cameos from many of Dre’s past protégés – Snoop Dog, Eminem – as well as newer talents like Anderson .Paak and King Mez, plus current hip hop innovator Kendrick Lamar. But it also revives issues that have dogged Dre’s output in the past. One track, Loose Cannons, includes a skit in which a woman is brutalised and murdered. “I’ve got to be honest I really disliked that skit and I thought it was really out of place, being that its an album in 2015 and Dre is where he is in his career,” says Wadams. “Why are they still doing it?” Yet he points out that a number of tracks are “much more positive in nature”, crediting the influence of Kendrick Lamar who “doesn’t touch on any of that, it’s not what he’s about, and it’s a welcome, positive turn for the genre.”