Give Up Your Dreams by The Phoenix Foundation

Nick Bollinger enters the musical dreams of The Phoenix Foundation. 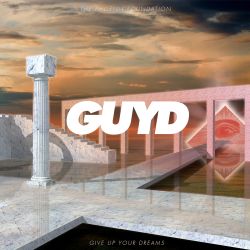 One of the ironies of the so-called music business is that it any money you make is likely to be generated by something only tangentially linked to your music. And among the non-musical merchandise launched along with the new Phoenix Foundation album are a pillowcase and a sleep mask - which is highly appropriate really, as dreams of various kinds are intrinsic to this album. On one level, the music simulates a kind of dream state, or perhaps provides a soundtrack for one. You could put on the sleep mask, get your head comfortable on that pillowcase and float away on lush, otherworldly dreamscapes.

The Phoenix Foundation’s central songwriters Sam Scott and Luke Buda have traditionally been strong on lyrics and melodies, and that hasn’t changed. Still, the striking thing about this album is not the words or even the tunes, but a hypnotic quality based on repetition, which is where the essence of this music’s dreaminess resides. Their fascination with Krautrock has long been apparent – think of the title track from 2010’s Buffalo – but with new drummer Chris O’Connor they have taken those motoric rhythms a step further, combining them with beats that might have their beginnings in electronica or perhaps even African music.

But if the overall mood is dreamlike, the title track – which comes just before the end - is like being woken with a cold shower. Titled ‘Give Up Your Dreams’, it’s a literal wake-up call. Full of droll observations of growing up with rock’n’roll dreams only to find yourself face to face with the responsibilities of adult life, it’s both an exercise in self-mockery and a heartfelt plea.

So Give Up Your Dreams finds The Phoenix Foundation at an apparent crossroads. Musically they have never been better, their experiments never more imaginative nor fruitful. And they are doing things that bands only get to do by sticking together for as long as these guys have and building their own musical language. They may not have had the hits, though a killer pop song like ‘Bob Lennon John Dylan’ (a single from last year and included here) shows they could yet be capable of it. Still I can’t think of another New Zealand band, other than Split Enz, who have created such a rich catalogue; where every album seems to have grown from the one before, while taking a step in some new direction to see what can be found there. We may not appreciate it but The Phoenix Foundation are a national treasure, and if we let this lot give up their dreams then we might as well all give up.