Who Is The Sender? by Bill Fay 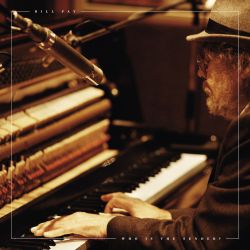 The most recent album by the singer, songwriter and pianist Bill Fay has already been out for a few months, but that’s a mere blink in terms of Fay’s release schedule. He made two albums in the early 70s but they sold poorly and he was soon dropped by a record company who had presumably hoped his sombre, subtle songs might attract some of the same listeners who were flocking to Leonard Cohen’s music in vast numbers. At that point Fay gave up any thoughts of making music his profession and spent most of the remaining century in his native North London, believing his records had been lost and forgotten. But records, once they are released into the world, take on lives of their own, and by the late 90s those two albums had become cultishly collectable, which eventually led to their reissue. Gradually, more of his recordings began to be issued; demos and unreleased material from the 60s and 70s. Then in 2012 – a mere 41 years after his last proper album – came a brand new collection, Life Is People. And now there’s a follow-up.

Fay’s songs are full of observations of the natural world. There are geese overhead, squirrels nesting, rain and rivers and a particular awareness of the flora; he’s the first person I’ve ever heard get ‘saxifrage’ into a lyric. The impression is of someone who spends a lot of time sitting very still, and that’s echoed in the hushed quality of the music and the consistently downbeat tempos. But the observations of nature are just part of the bigger observation that is really the theme of Fay’s writing: and that’s nothing less than the lack of godliness he finds in today’s world.

Fay sees this spiritual deficit in the way humans continue to wage wars, and a song like ‘War Machine’ would seem obvious and even heavy-handed if he didn’t deliver it with such gentle understated sadness.Listening to this solemn, beautiful record I get the feeling that Fay would be sitting in North London, where he’s lived all his life, quietly playing these songs to himself or to God, whether he had ever been rediscovered or not.

Songs played: The Geese Are Flying Westward, How Little, Underneath The Sun, War Machine, Something Else Ahead, Who Is The Sender?