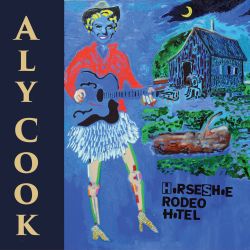 Aly Cook was already in her forties when she released her debut album just four years ago, having been told by record companies that there wasn’t any future for a country singer over 25. That album, which she made independently, wound up taking the Nelson-born singer all over the world. The follow-up finds her working again with producer Alan Jansson (How Bizarre), but her new songs, with their references to the Kimberley and the Blue Mountains, reflect the amount of time Cook has spent touring across the ditch since her debut. The title comes from a song Alan Jansson wrote with Brent Hayward, a former member of pioneering Wellington post-punks Shoes This High, and also the painter of the album’s terrific cover neo-primitive cover.