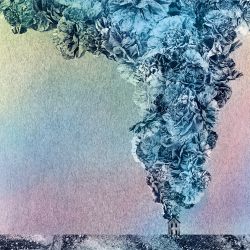 When Daughn Gibson, first appeared with his debut All Hell on tiny Pennsylvania indie White Denim it was like a bolt from the blue, arriving without precedent or fanfare but sounding quite unlike anyone else. Three years later, and with a much celebrated, but rather middling album in the interim, he has returned with Carnation. A former truck driver and drummer for Pearls And Brass, the songs he writes conjure up dark atmospheric scenes from motel rooms and strip malls, in America’s forgotten industrial small towns. Flitting between 80’s inspired pop moments and subdued moody ballads, his commanding voice  now has the ability to recall the suave and smooth likes of Bryan Ferry, David Bowie or Japan’s David Sylvian - rather than simply restricting his focus to the Lee Hazlewoods and Johnny Cashs of the world, but it comes with a price tag of diminished potency.

Songs featured: Back With The Family, A Rope Aint Enough, Bled To Death, Heaven You Better Come In, Shine Of The Night, For Every Bite, Shatter You Through, Let Him Deal.