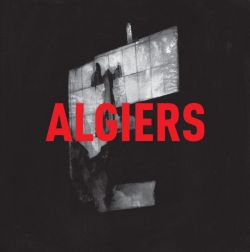 Algiers are a mixed race, three piece, originally from Atlanta, who have concocted a dramatic blend that incorporates gospel, post punk and a generous helping of other unlikely ingredients, into one almighty noise on their self titled debut. Signed to the US indie Matador Records on the strength of a couple of singles, and an impeccably curated website that catalogues their many political and musical inspirations, they are a refreshingly difficult and substantial listening experience - in times where that has increasingly become a rarity.

While America’s deep south is undoubtedly the reference point, none of the group’s members actually still live there, having all travelled overseas to pursue graduate degrees. Started as a trans-Atlantic  file swapping project with no real intentions of ever playing live, they’ve never felt the need to have a permanent drummer. Instead the impressive combination of weighty programmed beats, and a lot of handicapping and footstomping, is generated by the three band members themselves.