Jim Pinckney delves into the latest album from the man they call The Modfather, Paul Weller 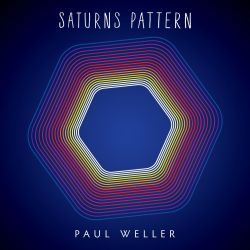 From early status as the tidiest man in punk rock with The Jam through to the sophisticated soul boy moves with the Style Council and a solo career that has pleasantly meandered through a quarter of a century, Paul Weller has never been afraid of wearing his influences on his sleeve. While there are echoes of the Kinks, The Who, The Beach Boys, The Beatles and other behemoths of rock on Saturns Pattern there is also plenty of evidence of his passion for new music, with touches that reference the modern soft psychedelia of Australia’s Tame Impala and Jagwar Ma, and plenty of other movers and shakers less than half his age. While to many he maybe the man, ultimately Weller is still a fan. It’s refreshing to hear that he is still finding, and most importantly seeking out, ways of pushing himself, and his art, with predominantly interesting results

Songs Featured: Saturns Pattern, White Sky, These City Streets, Long Time, Pick It Up, I’m Where I Should Be