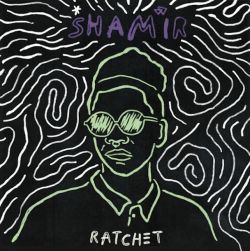 Opening track Las Vegas sets the scene for Ratchet, an album with all the bells and whistles of the city Shamir calls home.  But sitting atop the synth bass groove is a voice completely unexpected: refreshingly imperfect and decidedly ambiguous in gender.

While many before have used gender ambiguity in performance as a means of challenging assumptions or breaking down barriers, any such result here is simply down to Shamir being Shamir. In the words of one of Shamir’s heroes, Taylor Swift: “Unique and different is the next generation of beautiful.”

Songs Featured: Las Vegas, Youth, On the Regular, Call it Off, Make a Scene, Head in the Clouds