Andrea Anacan initially picked up karate in part to keep safe in case of an attempted kidnapping, but now it may be taking her to the Tokyo Olympics. 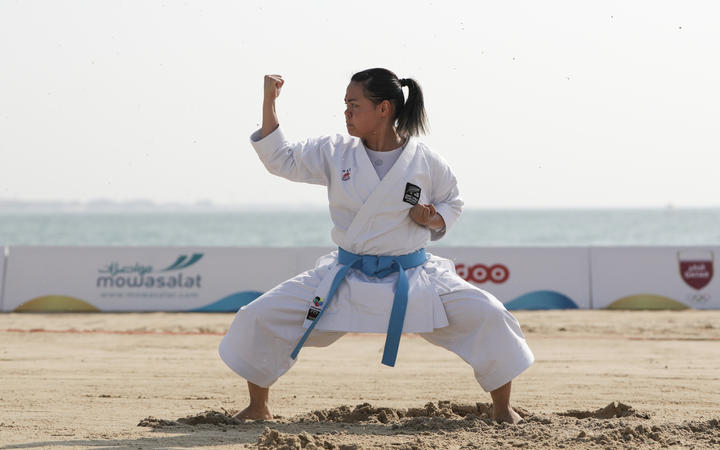 Anacan took up the sport at the age of four when her family was living in the Philippines because of its more practical applications.

"My mum gave me an option between ballet or karate," she told The Weekend.

"I don't remember saying this, but apparently I told her, 'well, what's going to happen if I get kidnapped? Do you want me to dance in front of them? Or do you want me to fight them off?' And she was like, 'Oh, you're right'."

The family moved to New Zealand when Anacan was 12 and she initially had difficulty fitting into the sport here and considered quitting, before she found her new sensei Johnny Ling.

She now trusts her instructor completely and says he treats her as his own daughter, allowing her to use his home dojo at any time for training.

"Sensei told me when I was 14, 'if you don't grow any taller in a year, you'll stop competing'. Because he told me that I can't reach my opponents when I'm fighting and they're so much taller than me and with a longer reach.

"I told him, 'okay, I trust you if you just want me to do kata' and he told me 'well, it's not really about me, it's about your body, I need your limbs longer'.

"I didn't grow any taller, I stopped growing and I'm 4ft11 but it's actually really beneficial for kata because my centre of gravity is lower."

Anacan finished seventh at the 2018 karate world championships and has been competing with an eye on making the New Zealand Olympic team since then.

She's confident that she's at the top of her game for it.

"I definitely feel like I'm at my best at the moment]... when I say I'm at my best, I feel better than all the previous years I've done it. That's proven by the 2018 results that I did for World Champs.

"We used to view my age, because I'm 29 now, as kind of old for my division because a lot of 16-year olds are coming up but that was proven wrong by the world champ last year who is 10 years my senior."