Wally Maloney and Sally Ford from the Melbourne Ska Orchestra

The Melbourne Ska Orchestra started in 2003 when a call went out to join all the horn sections of every band in the city for a one-off gig.

The aim says founding band member Wally Maloney was to set a Guinness Book of Records by having “the most horns on stage doing the skank.”

“It sounds weird but it’s a Jamaican musical term for the offbeat, that’s something that is a main feature of ska, there is a heavy off beat and often you’ll have the horn players playing that off beat.” 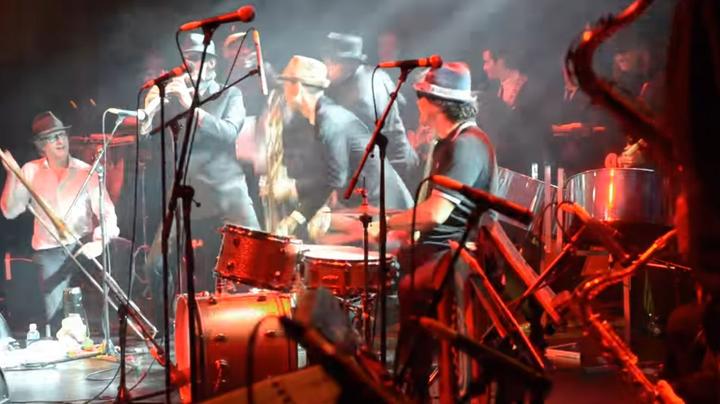 The band is now a regular on the festival circuit with around 20 members and has won an ARIA for a style of music that has ebbed and flowed in popularity.

The power of the skank nevertheless has endured, says band member Sally Ford.

“There’s something very fundamental, almost visceral actually, if you get 12 horns skanking, the guitarist is skanking as well, and it’s a very powerful and kind of joyous feeling to be part of that machine.”

“It’s like this giant freight train that is chugging forward,” says Maloney.

Ska music started in Jamaica in the late fifties and early 1960s and was Jamaica’s version of the rhythm and blues coming out of the southern states of America, says Maloney.

“They were getting the old 78 records from the US and playing those at Sound Systems which were big mobile dance parties.

“They started making their own music and they put the skank into it which kind of turned it into ska.”

Ska morphed into rock steady which in turn evolved into reggae – meanwhile many Jamaicans were emigrating to the UK in search of work. Their children grew up listening to their parents’ ska records planting the seed for a second ska movement.

Those children formed bands in the late 70s and early 80s mixing ska and punk creating Two Tone – spearheaded by bands such as The Specials, Madness and Selecter.

“The bands were made up of the white kids and the Jamaican kids and they all came together to make this music which was called Two Tone.”

When The Specials had a global hit with Message to You, an old ska classic, a whole ska found a whole new audience.