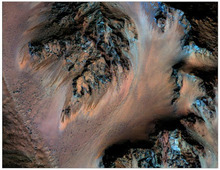 2015 will be remembered as one of the great breakthrough years in our understanding of Mars and beyond.

Indications of liquid water on Mars, new insights into black holes and the dwarf planet Pluto, plus the early results of the lander on Comet 67P offering tantalising information on the composition and evolutionary history of comets.The Hubble Space Telescope has captured the image of the first-ever predicted supernova explosion.

New Zealand may not be part of these deep space missions but we still have a vital role to play in research into outer space.

Three of our keenest astronomers are based at Auckland University of Technology: Sergei Gulyaev is Professor of Astronomy and Director of the Institute for Radio Astronomy and Space Research - Professor Steve Pointing is the Director of the Institute for Applied Ecology New Zealand and Jordan Alexander is a stargazer and lecturer in Computer and Mathematical Sciences.