This week’s parliamentary urgency illustrated the natural divide between the role of Parliament and that of government - as noted in Wednesday’s edition of The House.

We referred to the Speaker as Parliament’s champion, after Trevor Mallard on Wednesday chided both government and opposition for falling short of an ideal process.

On Thursday I chatted to him about his role, which he described as a guardian of process. On Thursday afternoon, the Speaker was back in action during Question Time pushing to improve the parliamentary usefulness of opposition questions. 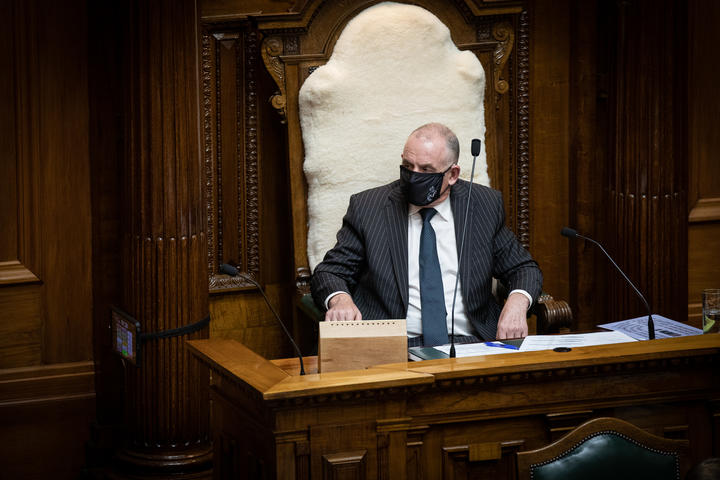 Guardian of the process

The first thing that Trevor Mallard discussed was the passing of legislation under urgency, referring back to his earlier comments in the House on Wednesday.

“I see the Speaker as having a responsibility for looking after processes around the Parliament. There’s been a lot of knowledge built up over the years about the best way of doing legislation, and generally Parliament works that way.

“It works much, much better than it did in the past. Certainly in the pre-[Geoffrey] Palmer times, urgency was extensively used. Select committees were pretty rarely used for legislation and there were lots of errors.”

Again the Speaker noted that there had been faults in both the government’s and the Parliament’s approaches to the bills passed under urgency.

“My view is that wherever possible urgency shouldn’t be used to pass bills. Sometimes… it’s appropriate to have very short select committee processes. … Sometimes if [committees] know an issue is coming down the track and it’s going to come down in a hurry they’ve got an inquiry function [they can use to pre-emptively investigate the issue].

He also notes that there were various factors influencing the government’s approach.

“Sometimes things are happening in a hurry. Clearly the international evidence around Covid – what works, what doesn’t work – is changing a lot. There were court decisions which impinged on this and would have changed the approach the government had to use; but the general idea of the certificates – rather than the detail of the law – committees should have had a look at.”

Giving aide to the ‘enemy’

The Speaker, Trevor Mallard, is a Labour Party MP, but Speakers tend to find themselves in an unusual position somewhere between and outside the parties – especially if they see themselves (as Lockwood Smith did and Trevor Mallard does), as a guardian of Parliament’s processes.

Probably over time anyone in the role is assured of upsetting MPs on all sides of the House. The previous speaker David Carter described the role as “isolated” and, when he began, as “lonely”.

Trevor Mallard says doing it well is a tricky balance.

“I’ve got to be really careful because I’m sort of like the referee but I’m also the guardian of the process, and there’s a little bit of coaching involved in doing the job.”

The Speaker is quite happy to coach MPs from any party on how to do their jobs better - and that includes helping opposition MPs sharpen their ability to question the government (Trevor Mallard’s own party).

“MPs quite often come in [to the Speaker’s Office]. I’ve had two in here this week… trying to work out the appropriate ways of doing the supplementary questions in order to stay within the Standing Orders. To get the question that they want, to try and elicit the answer they want. But cognisant of the fact that it’s not always easy.

“I think one of my faults is a bit often, in the House, I probably try to coach the whole House while I’m refereeing.”

As an outside observer I always find those impromptu masterclasses useful. Apart from anything else they sometimes are a gift for making a radio programme - and it’s unlikely that an MP would invite a journalist to sit in on some one-on-one tutoring in the Speaker's Office (though I’d definitely say yes).

Mallard says that when he slips into coach mode in the House he does see some MPs diving into their copies of Speakers’ Rulings. Speakers’ Rulings is Parliament’s regularly updated volume of collected decisions from Speakers through the years. It’s the parliamentary equivalent of common law, and is likely to be referred to the actual rule book (Standing Orders).

As it happened, on Thursday afternoon in the House the Speaker did school the opposition on the rules about the relationship between primary and supplementary questions during Question Time.

A couple of opposition MPs had each begun with the broadest possible inquiry.

Neither minister was actually present so more junior ministers were answering on their behalf - this is not unusual, especially on a Thursday.

But both MPs followed up from those generalities with supplementary questions that demanded an extraordinary grasp of detail; for example about how many respirators were present in a specific hospital, or questions relating to the numerical details of benefit numbers.

So inevitably a lot of the answers began:

“​​I don't have that information in front of me, and if the member wanted to be more specific, then she should have put that into the primary question. But what I can say is…”

This kind of questioning doesn’t achieve much from a parliamentary perspective, though it may serve a political objective.

The Speaker reminded the opposition twice that you can’t expect specific answers in supplementaries that follow on from a very general primary question - and that supplementary questions should flow directly from the initial query.

The Shadow Leader of the House National MP Michael Woodhouse begged to differ:

“…the Speaker's ruling you referenced doesn't specifically rule out the questions; it just says that the questioner can't expect a specific answer. The second thing I would say is that it does make it rather difficult when we prepare on the basis that the minister is there to answer questions, and an associate or other minister is answering on their behalf.”

The Leader of the House Chris Hipkins joined the conversation.

“There are regularly occasions when ministers are unable to be in the debating chamber at any given time, and… if members who are asking questions wish to ensure [detailed answers]… regardless of whether it's the usual minister or someone standing in their place … they [should] ask more specific [primary] questions.”

Primary questions are the ones ministers get in advance and so warn them to prepare for questions on a specific area. General primary questions don’t let them prepare at all (which may sometimes be the point of them, but doesn’t elucidate much information).

It’s worth noting that the Speaker demands better answers in exchanges that begin with specific primary questions - because the minister has had a chance to prepare.

At this point the Speaker put on his tutoring hat and added an interesting insight into the role of a minister.

“As people are aware, I'm a former Minister of Education. We had over 10,000 ministerials a year — 10,000 separate things that we dealt with individually in a year, and what that meant was, when there was questioning about things, frankly, there was a big proportion of those that were not front of mind and, therefore, an indication of the specific area of questions meant that the minister could come prepared.

“Both members have drawn distinctions where there was a member answering on behalf, but, frankly, even as the primary minister answering questions as detailed as the two we've had … it is, I think, unreasonable without proper notice to expect ministers to answer those questions in detail. They're very specific.

“They're important questions, and if members actually want answers to them, then an indication of the direction of travel would certainly assist them in getting the answers. If people don't want real answers, then we'll have what's happened here today.”

In case you wondered what 10,000 ministerials would look like. I understand that a ministerial could be any memo, policy, cabinet paper, or similar official document that might cross a minister’s desk - any of which might be the subject of a question.

Some ministries are obviously gargantuan behemoths to stay on top of. Pity a prime minister who can asked about any or all of them.

A Speaker coaching individual MPs is probably laudable, but coaching the wider Parliament is just interesting all round.