The safe bet and the cash cache: imprest supply

Recently the National Party’s finance spokesperson Michael Woodhouse has been looking to tackle the government on the subject of spending. His underlying argument is that the government is spending too much and spending it inappropriately.

That debate is not the subject of this story. 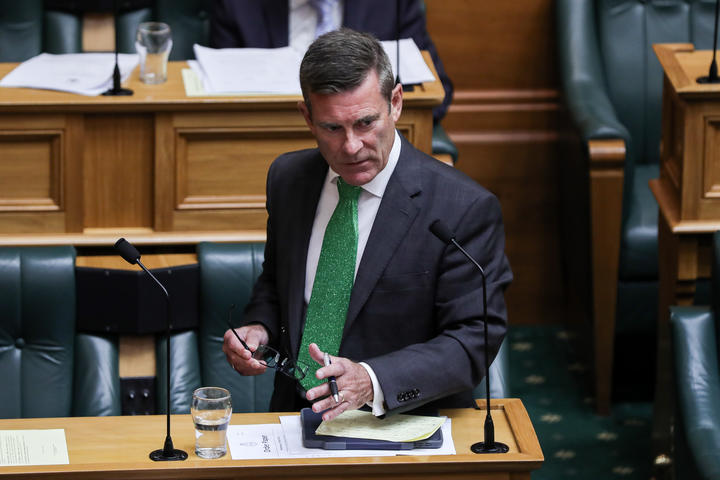 Betting on a straw man

As part of his attack Michael Woodhouse protested recently that the government was spending so wildly it would run out of money and as a result be forced to pass another imprest supply bill with the budget approval (which was then awaiting a third and final reading).

To bring attention to his argument (and for a little drama), he went so far as to offer a wager on the occurrence.

“I bet one bottle of wine that this time next week we are going to be in the House debating a second imprest supply bill where the government is asking for more money. And the reason is quite simple: they have emptied the Covid tin, in large part, on things that aren't related to Covid.” - Michael Woodhouse (National)

This story is about imprest supply.

We will address exactly what imprest supply is an a moment, but first let’s consider that bet. In the meanwhile, just think of imprest supply as a cache of cash. A cash cache.

The bet was a sure winner but it was also quite wrong. Mostly it provides us an excuse to explain a financial process that few people seem to understand. Michael Woodhouse’s betting stunt seemed to rely on the public having no idea what imprest supply is, or how it works. Otherwise everyone would have responded 'well, duh'.

‘The same thing we do every night Pinky’

The wager had two major problems. The first problem is: a second imprest supply bill happens at this time every year. It's happened like clockwork; every government, every year, since 1989 when the Public Finance Act reformed this whole process.

Parliament’s rules especially allow a second imprest supply bill to get tacked onto the budget debate at the third reading. It’s uncontroversial enough that it doesn’t even warrant a debate of its own. It doesn’t get less controversial or more predictable than that.

So betting a bottle of wine that an imprest supply bill would turn up along with the third reading of the budget is like taking the extraordinary punt that the Melbourne Cup will follow on shortly after the Caulfield, or the main course will arrive after the entree. I’m surprised Michael Woodhouse wasn’t prepared to put more on the table.

The second problem relates to the reason that a new imprest supply is inevitably tacked on to the budget at the third reading. It is not because “they have emptied the Covid tin”, as Mr Woodhouse claimed; it is because the authority given to the government by the first imprest supply bill automatically expires when the budget is passed. It expires whether or not it is spent. (It wasn't spent).

So once the budget is approved government's either have to pass a replacement imprest supply authority or do without a cache of cash. 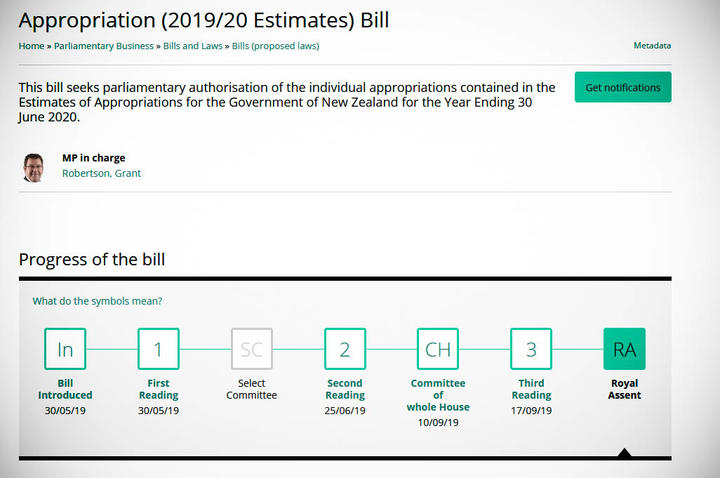 The stages of the Budget Bill are tracked on Parliament's website Photo: VNP / Daniela Maoate-Cox

But, what is imprest supply?

It's simpler than you might think. It revolves around the cycle of spending permissions that are referred to as 'the budget'.

The Estimates (the budget) are usually announced around May or a bit later but not finally approved by Parliament for three or four months.

By the time the Estimates are approved the governmental financial year (which begins in July), is already well underway.

Rather than governments sitting on their hands and not paying any benefits, wages or bills for a couple of months they get a pre-approval to spend in the meantime (just until the budget is approved). That pre-approval is called Imprest Supply.

So before the financial year begins a first Imprest Supply Bill is passed. (It piggybacks on the Supplementary Estimates, but more about them later).

That first Imprest Supply Bill nominates an amount of money (more than needed) that the government has permission to spend until the Estimates are approved.

When the Estimates are approved that first Imprest Supply Bill becomes useless. The authority it granted the government for spending expires.

That was the point we were approaching when Michael Woodhouse decried the possibility of a second imprest supply as evidence of profligacy. He was being playful with reality in suggesting the money must therefore all be spent.

The difficulty for a government is that by the time the Estimates are finally approved the world has moved on and so too has their spending plan. Things happen.

So governments decide they still require a wider authority to spend beyond the very specific details of the Estimates. Just in case. Even without crises, planned costs fluctuate unpredictably — like how many people are on benefits, or how much that highway actually costs to build.

And Parliaments always pass the imprest bills giving governments authority to spend beyond the actual estimates. Well beyond. Parliaments are very trusting. 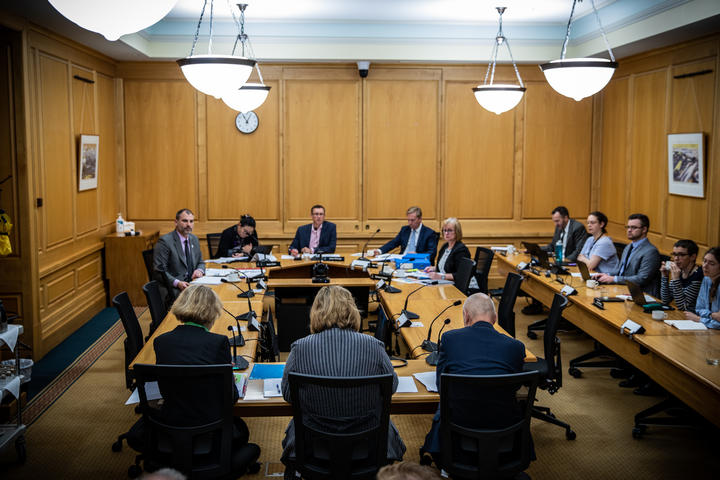 An estimates hearing underway at Parliament. Ministers appear before select committees every year to defend their spending plans, and then later to also defend their actual spending. Photo: VNP / Daniela Maoate-Cox

At this point I can almost hear you shouting ‘why bother with a budget at all if you’re also going to give governments carte-blanche to ignore it and spend more?’

That is a good question. You’d think someone would need to approve the spending. They do.

Parliament’s financial review process has two ends. At the front end months of work go into reviewing the planned spending outlined in the budget. And at the back end months of work again go into going through the details of what was actually spent (including via imprest supply) and on what. Both select committees and the House spend a huge amount of time on reviewing all this.

Both ends of that spending review ultimately need to be approved by the full Parliament. If Parliament doesn’t approve the actual spending that happened (including via imprest supply), that’s automatically the end of the government. Spending bills are always a 'confidence' vote, as in: 'does the parliament continue to have confidence in the government?'

Those end of year appropriations are first contained in a bill that is a sequel to the budget called the Appropriations (Supplementary Estimates) Bill. Still an estimate (because final accounts aren't in) but with corrections from the initial budget. It is debated at length towards the end of the financial year. At length.

It is at this point that the second (or third if there is one) imprest supply authority expires, and so the next year's first imprest supply bill is tacked on to the debate on the supplementary estimates. This is a circle that goes round and round.

Basically, all governments always have a current authorisation under imprest supply. No-one wants to get caught short if something goes wrong and money is needed and now.

When the year's actual finalised spend is available Parliament goes over that and confirms it as well.  That final wrap-up is called the Appropriations (Confirmation and Validation Bill). All of those bills get a lot of parliamentary attention. All of them require approval. 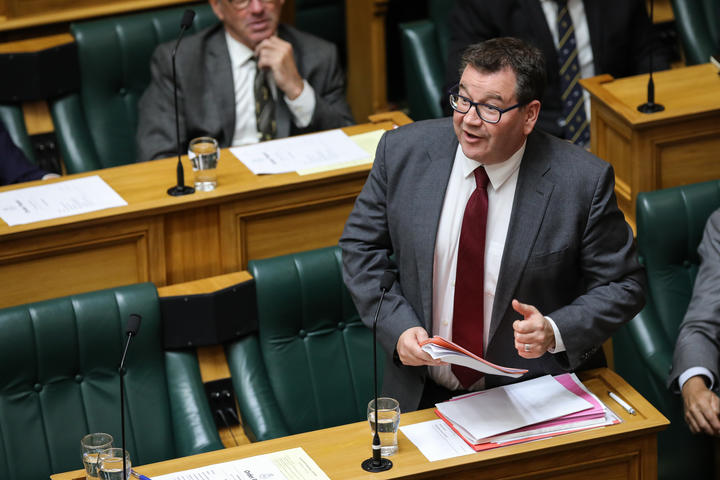 How big is your envelope?

There’s one more important thing to note about imprest supply. It’s something Grant Robertson explained in the recent debate.

“That second imprest supply bill includes around $24 billion worth of authority of expenses, $15 billion of capital expenditure, and a proposed $2 billion capital injection authority. This is an envelope of funding. It is not a target. In the past two years, we have seen the imprest supply drawn down to the tune of around 36% of the authority last year (the 2020-21 year), and 63% of the authority in the 2019-20 year.”

Governments don’t know what crisis might occur next, and they don’t like having to come back and ask for more so they give themselves plenty of leeway. This tends to make allowed imprest supply spending look much bigger than it is actually likely to be.

It has to be admitted though, with Covid-19 wage support and resurgence support, recent imprest sizes have been pretty eye-watering.

“So can I just reiterate that for the benefit of members: this is an authority. It is an envelope of funding. It ensures that if unforeseen circumstances occur, the Government has the authority to spend. That money then has to be appropriated by Parliament.” - Grant Robertson (Minister of Finance)

And now you know imprest supply. Be impressed, it’s not well known, and you are now unlikely to take up any tasty sounding bets on the likelihood of it occurring.