The ministerial sprint: how to manage multiple jobs

Like in most ministerial spaces, in the foyer of Chris Hipkin’s office are framed copies of political cartoons he has appeared in.

In one Jeff Bell cartoon he sprints on a treadmill while reading a clutch of hefty briefing books; behind him the prime minister urges him ever forward.

The cartoon dates from when Covid-19 was added to his already hefty workload. He was already Minister of Education, Minister for State Services, and Leader of the House. Any one of those could be a full-time role.

The Jeff Bell cartoon brings to mind the Red Queen from Alice in Wonderland asserting that:

"...it takes all the running you can do, to keep in the same place. If you want to get somewhere else, you must run at least twice as fast as that!"

I imagine being a government minister frequently feels a lot like that. It’s a wonder any MP in any Parliament desires the role.

All ministers have tough jobs but the more senior cabinet ministers tend to have prodigious workloads and wide responsibilities. This is true of all New Zealand governments of any party.

New Zealand’s cabinet has no set number of ministers but is typically 20 or so ‘inside’ cabinet (those who attend all meetings), plus a handful of ministers outside cabinet (but in the Executive Council). These extras are a mix of junior ministers and MPs from coalition partners.

This current government has 28 in the executive (roughly a quarter of Parliament).

That may seem like a lot of people but between those 28 they share 108 different jobs: 72 ministerial warrants, 34 associate warrants and five other roles (large jobs like prime minister or leader of the house).

How does the New Zealand cabinet compare with overseas ones? 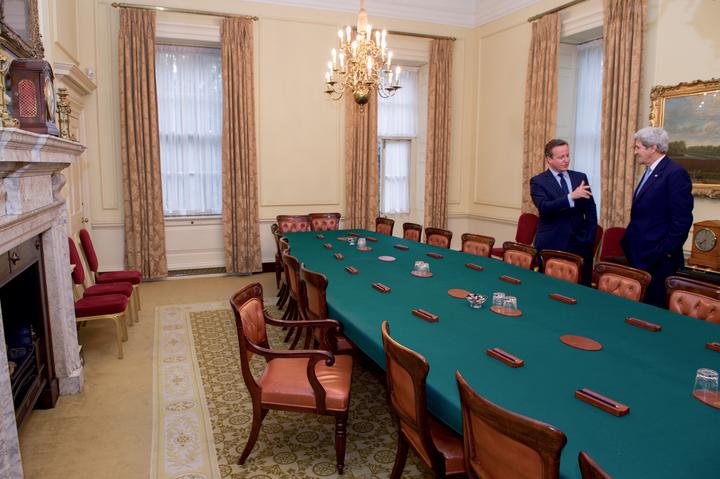 The British Cabinet has a limit of just 23 members (more can join but not get paid extra for it). Westminster’s rules seem to accrete around tradition rather than logic so odds are good the cabinet size is based on the size of the Georgian room they meet in at ‘Number 10’.

Twenty three seems incredibly efficient until you realise that there are usually more than 100 ‘junior ministers’ holding warrants outside cabinet at Westminster.

Some British cabinet ministers have as many as 11 or 12 'outside cabinet' ministers working under them, running the actual machinery.

So you could say the UK has an executive of more than 120 ministers. That's more than four times as many as New Zealand has - 120 is the size of New Zealand's entire Parliament of MPs. If our executive had 120 MPs in it who would be left to be the opposition?

Add to that the degree to which the British state is decentralised (parliaments in Wales, Scotland and Northern Ireland each have their own cabinets) and the delivery of things like education and social services are significantly run at council level. 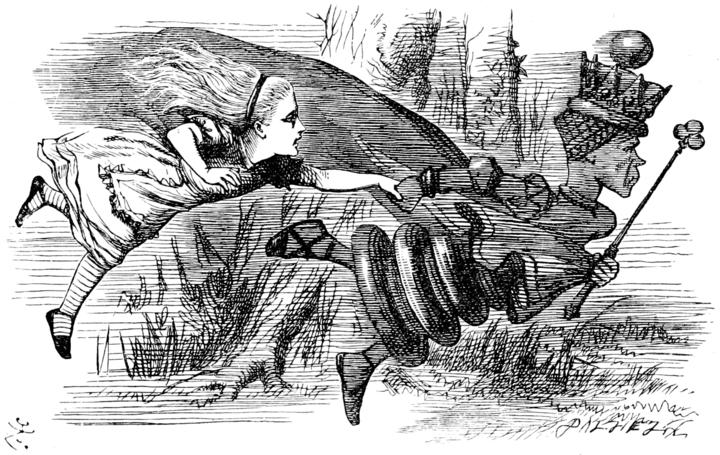 “...it takes all the running you can do, to keep in the same place. If you want to get somewhere else, you must run at least twice as fast as that!” The Red Queen's Race by John Tenniel Photo: public domain, published in 1871. Author died 1914.

Chris Hipkins puts coping down with a large workload down to three main things:

The teams of people that keep a minister from falling off the hamster wheel are quite small. I neglected to ask how many were in Hipkins’ office as an example but I would guess about 20 or so people are there to help him run his four portfolios. Those people fall into three different groups: the admin, political and seconded teams.

First are the (non-political) admin staff who Hipkins says keep everything moving.

"They manage the diary, they do all the bookings, they keep the paper flowing, they post the letters, they deal with the difficult phone calls, they keep the inbox in check (bearing in mind that on a busy day hundreds of messages can come in through a ministerial inbox.)"

The second group in a ministerial office are the ‘political’ staff, i.e. the ones who are not expected to remain unbiased and above the fray.

The last group are all experts seconded from various ministries and departments. They are called private secretaries.

"They are here to be a liaison between ministers and the government agencies that report to ministers."

The private secretaries are also non-political and won’t necessarily always be singing from the same song sheet as the executive is. They are there to say ‘you might think that’s a good idea but we already tried that and it failed’.

"Government departments are at liberty, and should in fact, provide ministers with advice they don’t like from time to time. Actually that’s very important in a democratic system."

The last piece of advice from Hipkins for coping with a bonkers ministerial workload is remembering you are a minister and not getting drawn into the day-to-day running of a department.

It probably helps if you have a large workload and don’t have time to get too involved; but by the same logic, junior ministers with just one small department to guide could easily end up almost acting as a second chief executive which wouldn’t help anyone.

"I’m not there to do all of the day-to-day decision making. I’m there to set the direction: to make sure that the people who are there to do that are doing what we expect of them, to make sure they are very clear what our expectations are of them. But in a big portfolio like education you’ve got thousands of schools and early childhood education providers, literally hundreds of thousands of people. I can’t manage on a day-to-day basis every aspect of that, and I don’t think the public would expect me to.

"You’ve got to be clear about the difference between governance and managing the portfolio. I’m here to govern it, and there are a whole army of people employed to manage the portfolio on a day-to-day basis."