Budget 2021: The numbers may change but the process stays the same

Budget 2021 has dominated Parliament today with the announcement of how the Government intends to spend taxpayer money over the next financial year. 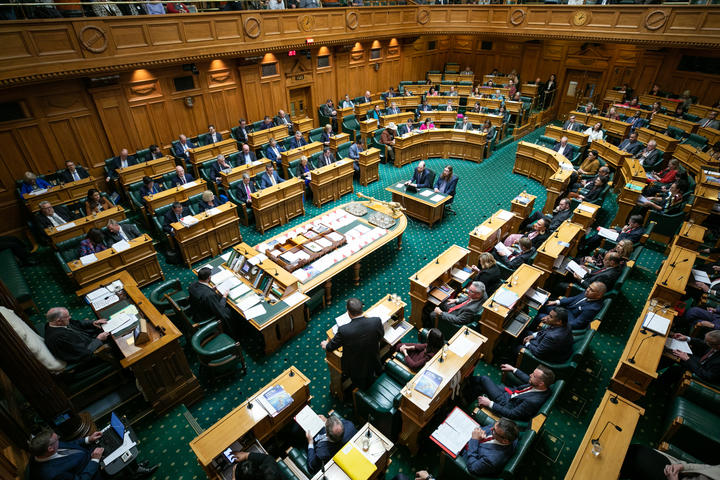 The process to pass the budget however follows a similar structure from year to year.

The Budget is actually a bill called the Appropriation (2021/22 Estimates) Bill and it's passed through Parliament a little differently from other bills.

Firstly, the Minister of Finance moves that the Appropriations Bill be read a first time.

No debate takes place on this first excursion so it’s much faster than a usual first reading in the House which takes two hours.

There is a bit of a delay as the Minister hands out copies of the Budget Statement and related documents to party leaders, the Speaker, the Clerk, and the Hansard staff (who transcribe what is said in the chamber). This part feels a bit ceremonial.

Then the Minister of Finance moves the bill be read a second time and at this point gives their big budget speech. There is no time limit on this part but it usually takes between 30 and 50 minutes.

Usual speech topics include the international economic outlook (expect much reference to the effects of Covid-19), how New Zealand’s economy is doing, how well the Government has done over the past year and then its economic plan for the country going forward.

The second reading takes place straight after the first. It's at this point that the Minister of Finances gives their budget statement. There is no time limit on this part but it usually takes between 30 and 50 minutes.

The speech usually includes the international economic outlook, how New Zealand’s economy is doing, how well the Government has done over the past year and then its economic plan for the country going forward.

There's a fair amount of clapping at anouncements made during the speech and after a long round of applause for the end of the Finance Minister's statement the Budget Debate begins.

The Leader of the Opposition goes first with a suggested change to the question being debated, including a ‘no-confidence’ motion.

If agreed to this motion would mean a change of Government but as the Government has majority support in the House it's unlikely this will happen.

The Leader of the Opposition is followed by the Prime Minister and then other party leaders. Leaders with six or more MPs get 20 minutes to speak each, other MPs get 10 minutes.

Fifteen hours in total is allowed for this debate giving a chance for nearly every MP to speak (if they split their calls to make shorter speeches), but instead of doing it all in one go the debate is spread out over a few days (weeks even).

While that takes place in the House, Ministers will appear before various select committees to answer questions specific to the budget plans for their own portfolio called the Estimates Hearings.

Once those are over a pile of reports from the hearings is debated by the House over 11 hours (called Estimates Debate).

Finally, a third reading debate takes place but again a little longer than the normal two hours clocking in at three hours in total. Once that's done the Budget bill is passed.