Member’s days at Parliament are on alternate Wednesdays - a day when government business is tucked away and instead MPs debate a melange of bills championed by non-executive MPs - parliament’s 92 backbenchers.

Member’s bill topics can range widely, from the attention grabbing to the barely noticed; from the deeply emotional to the dryly administrative. But what they have in common is that they are not government policy. The ideas for these bills come from individual MPs or their parties.

So you might think they are less likely to be caught up in party politics or personal animus. And you would often be correct.

This week (depending on speed) MPs are likely to debate as many as four member’s bills. All are at the second reading stage, when a bill returns from a select committee inquiry, with a report recommending it be passed, amended or ditched. 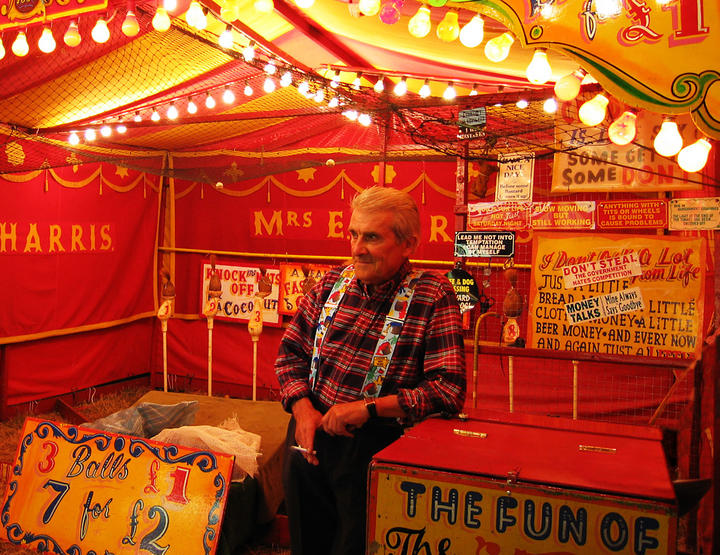 Albert Harris and his coconut shy – Cambridge Midsummer Fair 2005 In common with most fairground workers, Albert Harris has been in the fair all his life and comes from a long line of fair people. Although he is now past retirement age, he continues to run the Coconut shy established by his mother, Mrs. E. Harris, in 1936. Photo: Andrew Dunn 2005 - CC

The committee reports for three of those four bills suggest they pass with amendment. The ‘step right up! - everyone’s a winner!’ aspect is that those three bills originated with three different political parties. Two are from the opposition.

Hands off my Wheelchair

The first bill up is from Labour MP Anahila Kanongata-a Suisuiki. It aims to prevent disabled people who owe money under a court order from having equipment repossessed that they require for their “care, support or independence”. For example a court bailiff won’t be able to repossess a paraplegic’s wheelchair.

The Justice Committee (with membership from Labour, National and ACT) have recommended it be passed - though they do have a couple of ideas to improve it.

The second member’s bill on Wednesday is from the National Party MP for Taupo, Louise Upston. It comes out of an issue raised by a constituent including through petitions.

The Bill would equalise the treatment of victims in crimes where the offender was judged legally insane, with the victims of those found guilty. One way this would happen is changing the court finding from “not guilty on account of insanity” to “the acts or omissions are proven but the defendant is not criminally responsible on account of insanity”.

This bill too has wide support. Again a report fro the Justice committee recommends it pass with a few amendments.

The third bill up is the odd one out. Arguably it is the most political and it doesn't get the 'everyone's a winner' treatment.

Nick Smith’s bill to repeal the so-called waka-jumping bill returns from committee with a majority recommendation to NOT pass the Bill. Governing party MPs hold the majority on this committee.

This Bill is the one (championed by Winston Peters) that enables Parliament to vacate an MP’s seat if they resign from their party in some circumstances. List MPs would be replaced from the party list, constituent MPs would be free to contest their previous seat in a subsequent by-election. That law looks likely to survive this Bill.

If MPs move quickly they may get to a fourth bill. Originally a New Zealand First bill (from Mark Patterson) but now shepherded by National's Andrew Bayly.

The Bill increases the residency requirement for New Zealand Superannuation from 10 to 20 year after the age of 20. This Bill also returns to the House with a recommendation to be passed - and again with amendment.

The Committee report suggests that rather than imposing a sudden change of entitlement the new cut-off is phased-in over twenty years. Residency requirements would vary depending on your birth year.

That’s four bills originating from three different political parties - three of them in the names of current opposition MPs but also three of them likely to survive a second reading.

Which is a pretty good pass rate for member’s bills and shows that party affiliation isn’t necessarily a barrier to getting a law change over the line. 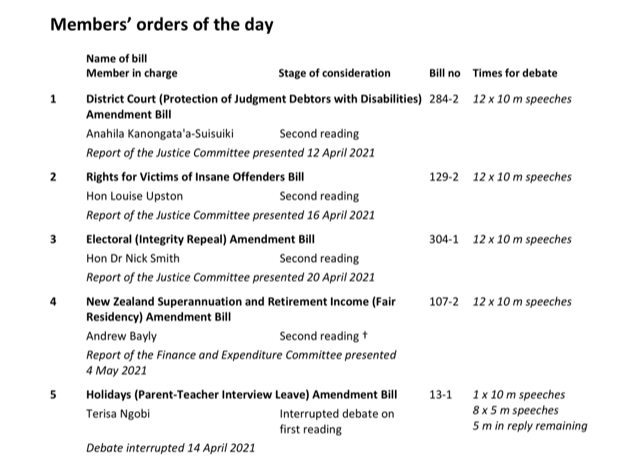 The members’ bills at the top of the list for this week. Photo: Parliament