You might not have noticed but New Zealand's constitution suddenly shifted a little bit six years ago. Parliament is currently figuring out how to adapt to that.

Constitutions have a way of changing over time, and ours is not exactly carved in marble. Even formal written ones can suddenly be interpreted very differently without being rewritten.

Did you know for example that the United States constitution doesn’t give the Supreme Court the power they frequently employ to strike down laws? They gave themselves that power back in 1803 in deciding a highly political case (Marbury v Madison), and got away with it. 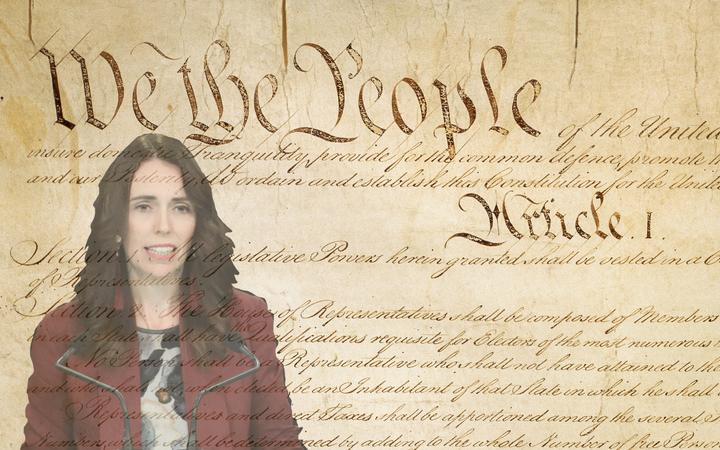 New Zealand’s own constitution shifted a little in a similar direction in 2015 (though not so seismically), and Parliament is now exploring how to adjust to the new landscape.

The change was caused by a court case between a prisoner and the crown (Taylor v Attorney General) about the right to vote. In its decision the High Court decided it had the right to declare a law inconsistent with another nominally ‘higher’ law, the Bill of Rights.

The then government appealed that adoption of a new power but the Supreme Court agreed with the earlier decision. And hey presto - slightly different constitutional landscape.

The Government has since acceded to that assertion of the court’s declarative ability. Andrew Little (the then Minister of Justice) said in Parliament last year:

“...our senior courts, who have found that they have the right to issue declarations of inconsistency in relation to the New Zealand Bill of Rights Act. And indeed, we recognise that and the nature of the relationship comity between this House and the judiciary—we recognise that. This bill, effectively, recognises that, but it does a very important thing, because for a citizen who is concerned that a piece of legislation has been passed that traduces their basic civil and human rights—something that is then found not only to cut across their rights but also not to be justified in a free and democratic society—merely getting a declaration is not enough. There must be a response.” 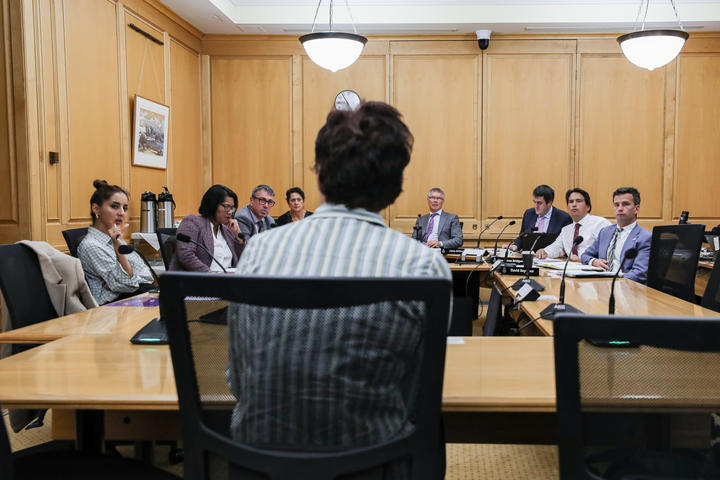 The Bill on offer

That response was the purpose of the Bill that Andrew Little was outlining to the House - the New Zealand Bill of Rights (Declarations of Inconsistency) Amendment Bill.

The Bill is actually pretty simple - it says that if a court declares there is a declaration of inconsistency between the Bill of Rights and another law the Attorney General must inform the House. It changes the Human Rights Act to make it the same.

That’s pretty much it. It doesn’t outline any follow-up actions (though the Human Rights Act currently does), or whether the government should say how it intends to respond.  The options might be to intend to change the offending law,  ignore the court, ask for outside advice (the law commission say), or whether Parliament should ask a Select Committee to investigate further.

There is some expectation that decisions about what happens next might best come from a different committee - the Standing Orders Committee (which suggests new rules for the House of Representatives).

Whether the current law stays as it is or changes to be a bit more directive remains to be seen. Professor Claudia Geiringer says “I think it’s likely that this Bill will be amended to go back to the position similar to the  current Human Rights Act, of also requiring an executive response. For the Attorney General to substantively inform Parliament, at some stage, of the Government’s stance with regard to the declaration.”

This issue however might raise some constitutional questions for you. If it does we’re here to help with one of New Zealand’s foremost constitutional scholars - Professor Claudia Geiringer from Victoria University of Wellington.

A declaration of inconsistency

First up - what is a declaration of inconsistency?

“A declaration of inconsistency is a formal but non-binding statement from the [superior] courts… that a particular law, passed by Parliament, is inconsistent with the NZ Bill of Rights Act.” - Professor Geiringer

Which only leads to other questions, like, for starters:

The New Zealand Bill of Rights

These declarations of inconsistency are legal decisions that a law is at odds with the New Zealand Bill of Rights Act 1990. So what is that exactly?

“It’s a statement of some core civil and political rights, many of which would be very familiar to most New Zealanders, such as the right to freedom of expression, the presumption of innocence, and so on, but it has the status of ordinary law.” - Professor Geiringer

The Bill of Rights is pretty much a list of all the differences between New Zealand’s rule of law and a despotic dystopia. It includes the right not to be killed, experimented on, or tortured, for example.

Freedom of thought, conscience and religion; freedom to worship, congregate, or protest (peacefully mind). Freedom from discrimination. Protection against unreasonable search, seizure, imprisonment or punishment. The right to fair justice... you get the idea.

It’s a go-to list of legal protections against the potential corruptions of power. 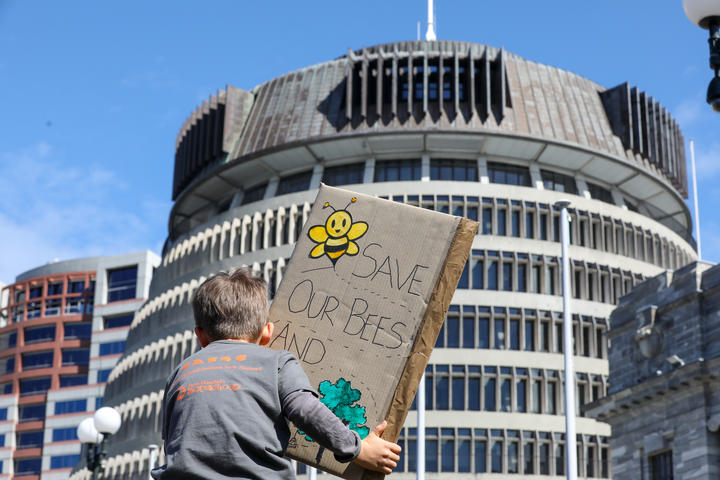 At a climate strike protest a small boy holds a banner towards the Beehive reading 'Save our bees and trees'. Photo: © VNP / Phil Smith

Is the Bill of Rights New Zealand’s constitution - I didn’t know we had one?

Yes and no. Yes, we have a constitution. Yes, it includes the Bill of Rights; but it also includes many other things.

Note though, that New Zealand’s constitution is not like some other countries’ ones.

“We’ve always had a constitution but it’s not a formal written document and so it has a different status from the constitutions in many other countries.

“Most countries in the world have what we call a written constitution, which is one document that contains the main rules of government, often also contains a Bill of Rights, and it has the status of higher or supreme law, so that if legislation is inconsistent with the constitution it can be struck down.

What are the different shapes of constitutions?

“Traditionally, until the last couple of decades, there have been two models. Either Judicial Supremacy (courts can enforce higher law), or Legislative Supremacy (Parliament’s law is supreme),”  says Professor Geiringer.

New Zealand is the latter by the way. Here Parliament is supreme.

“Traditionally systems of Legislative Supremacy didn’t have Bills of Rights. Parliament simply protected rights, in context, in a range of different pieces of legislation. Now what’s happened in the Anglo-Commonwealth in the last couple of decades is we’ve seen the evolution of a statutory Bill of Rights. It’s a model that allows for a Bill of Rights within a system of Legislative Supremacy.” - Professor Geiringer

Does a Bill of Rights cede authority to the courts?

No, Parliament is still top dog. Parliament sets the rules that constrain the other branches: the Judiciary, and the Executive (cabinet ministers and their administrations - what we think of as government).

Those laws are interpreted and enforced by the judiciary.

“According to the New Zealand Bill of Rights there are rights and they are protected, and the courts can enforce them against the Executive Branch. And the courts can interpret legislation consistently with these rights to the extent that it’s possible to do so. What they can’t do is strike down, or render unenforceable, legislation.” - Professor Geiringer

The problem has been that when Parliament passed the Bill of Rights it never said what should happen if the courts decided that it was in conflict with other law.

When other countries copied New Zealand’s model of a Bill of Rights inside a system of parliamentary supremacy they included an “express power in the document to make a declaration of inconsistency,” says Professor Geiringer.

“Ever since the Bill of Rights was passed the question has been raised… ‘OK, so the courts can’t strike down legislation but can they simply formally declare legislation to be inconsistent?’.”

Which is what they did.

The courts decided that declarations were “implicit in the Bill of Rights”, and were consistent with their power to “declare the law” (interpret what parliament’s laws actually mean).

It helped that one law (the Human Rights Act) specifically allowed them to act in relation to itself, that overseas jurisdictions included this power, and that the academics agreed as well.

What’s the impact of a declaration?

Parliament is still supreme. But this is a new direction - constitutionally speaking - whereby the judiciary can nudge the other branches of government (the legislature and executive) to take action or at least consider it.

“This is a way that… they can engage with the legislative branch without actually interfering with legislation,” says Professor Geiringer.

In that first ruling a declaration was described as a “dialogue” between the branches of government. 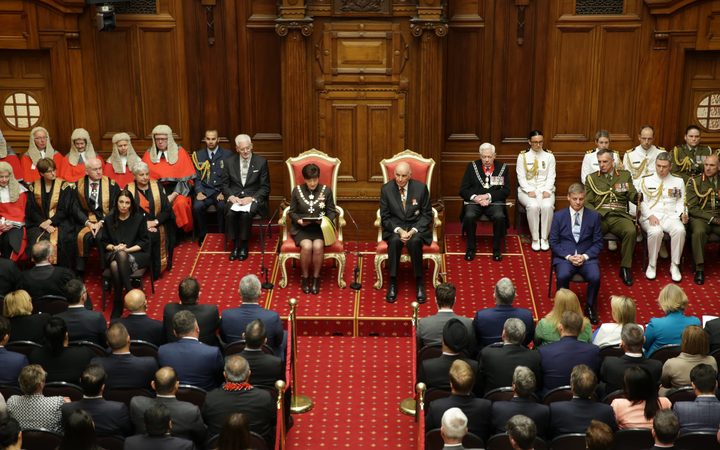 The State Opening of Parliament (from 2017); an occasion when representatives of all the branches of government share a stage.  Photo: RNZ / Richard Tindiller

The Three Branches of Government

And for a bonus - here is a rundown on those three branches of government.

The Legislature a.k.a. Parliament or The House

The Legislature has “the power to make laws of general application”.

Parliament is mostly the MPs we elect that meet as the House of Representatives (the House). But Parliament also includes the Head of State (Queen or Governor General).

The Executive a.k.a. the Government

The Executive - “operationalises law, and generates policy proposals.” The Executive comes up with most of the ideas for law, though some also come from the legislature (e.g. member's bills).

It also carries out the determinations of the Parliament (via it's various arms - ministries, departments, agencies, the police, the armed forces etc).

Actually, all of these branches are part of ‘government’ but 'The Government' is how we tend to describe the Executive. A lot words get used inexactly which makes it all very confusing. For example we tend to use The House and Parliament interchangeably, but they're not quite the same.

The Executive also has elements inside it:

The Judiciary - The Courts

The Judiciary - interprets and applies the law.

“The judiciary says what the law is and then it is an aspect of the rule of law that the executive abides by the law.

What is novel about a declaration of inconsistency is it is enabling the judges to declare the law in a kind-of non-authoritative way. In other words they say what they believe the legal position is but political actors are not bound by that.” - Professor Geiringer