The revenant Parliament: just one job

New Zealand's Parliament follows a 'sitting calendar' agreed at the beginning of each year. The MPs vary it a little along the way sometimes according to need but not by much. Except this year.

Earlier in the year Parliament adjourned unexpectedly for the first Covid lockdowns, and then (less unexpectedly) for the election, but now Parliament has returned for two more weeks after the election was delayed. Like a revenant that just can't lie down. 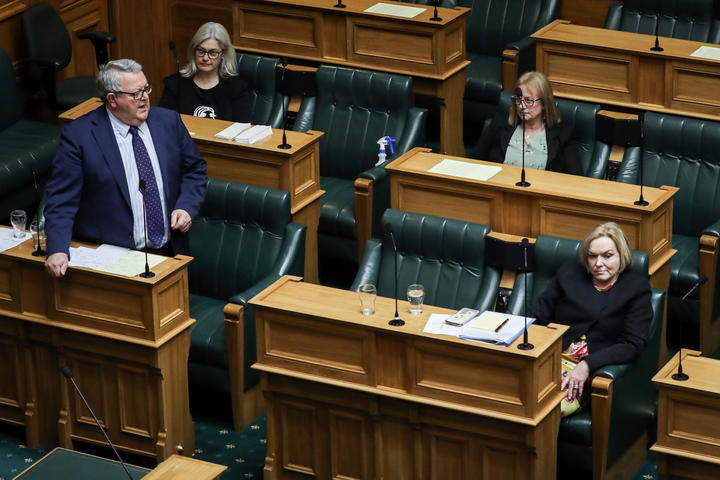 Gerry Brownlee and Judith Collins in the House during this week's General Debate, with other National Party MPs spaced out for Covid Alert Level 2 Photo: ©VNP / Phil Smith

Parliaments exist until they expire (after three years), or are dissolved by proclamation (a public announcement on behalf of the Governor General, but on the advice of the Prime Minister). So when the election was delayed the House had little option but to swing back into gear - it had only adjourned for a week or so (expecting to be dissolved before the stated date for its next meeting).

By agreement between the parties the activities of the House are highly reduced for this re-emergence from the almost-grave - with really just one or two of its various functions on centre stage.

Attendance is also highly reduced. Few Auckland-based MPs are in attendance, and none of the retiring MPs. Quite a few more are missing besides. In the House this week there were 30-40 MPs in the chamber including all the key ministers. 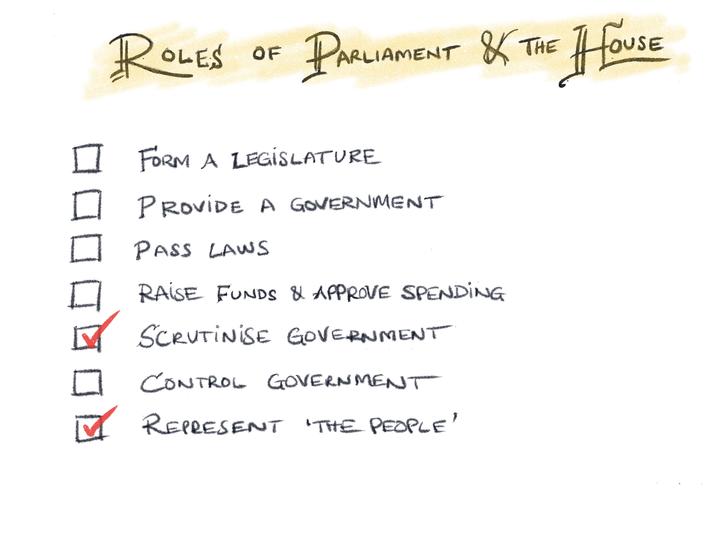 A quick tick-sheet of what are arguably the main roles of Parliament and the House of Representatives Photo: VNP / Phil Smith

There is no set list of the the 'jobs' of Parliament or its subset - The House of Representatives (which is Parliament minus the Governor General). But a job description for them might look like the one scribbled out above.

You can see there are many and varied functions, and Parliament is more powerful than you expect. Pre-eminent in fact.

The most crucial roles are probably providing a government (which is chosen from the members of the House), approving laws, raising revenue and approving its spending.

The role that makes the most noise is scrutinising the government.

This week almost everything Parliament did was under the scrutinising banner. It held Question Times, it considered some recent orders made under Covid legislation, and debated Covid reports from the Ministers of Health and Finance.

No legislation was considered, no spending was approved, no select committees met, no new governments were formed (unsurprisingly), government actions weren't 'approved'. In fact there were no votes at all.

The only other thing you might argue the House did this week was represent the people of New Zealand.

To some extent everything Parliament does satisfies this job, but somehow General Debates always feel particularly 'representy'. MPs are much more likely to bring their own personal opinion or highlight a perspective from their constituency during a general debate.

This week there was, of course, much electioneering and arguing about Covid, but some MPs also specifically brought representative views to the table.

"I'm going to finish off with an email I received today from a constituent who wrote to myself and Chris Bishop, and she said: 'Excuse me that I'm writing to both of you, but I want both of you to know that I fervently hope that you are both voices of reason in Parliament during this challenging time. It is a virus. I do not understand this call for heads to roll. We are all in this together, and only together we can hope to rein this virus in for a while. I trust the integrity of you both, that you please work together and pull your colleagues up when you see this not happening.' I hope we can all do that."

Poto Williams (Minister for the Community and Voluntary Sector) did something similar during the general debate when she spoke in Cook Island Māori specifically to the Cook Island community. She added in English thoughts about recent negative messages and the resilience of the Pasifika community.

"What I've said in our language is that I want to send a message of love and encouragement to our Cook Islands people in Auckland and around Aotearoa to be strong in their hearts to help us beat coronavirus. I ask for them all to have a test if they are feeling unwell and to encourage all of our Cook Islands people to support one another. I ask that we pray for those who are sick and we look after our families at this time, and we also pray for the people back home in the Cook Islands. If we work together to beat the virus, we will be able to join our loved ones both in Aotearoa and back in our heritage homeland of the Cook Islands."