Parliament's second week in the debating chamber at alert level 3 includes the return of the General Debate and two Covid-19 related bills.

MPs are back in the debating chamber in diminished numbers, with spare seats between them and bottles of disinfectant scattered around the room.

Here's what the House of Representatives worked on in week two of three for this sitting block. 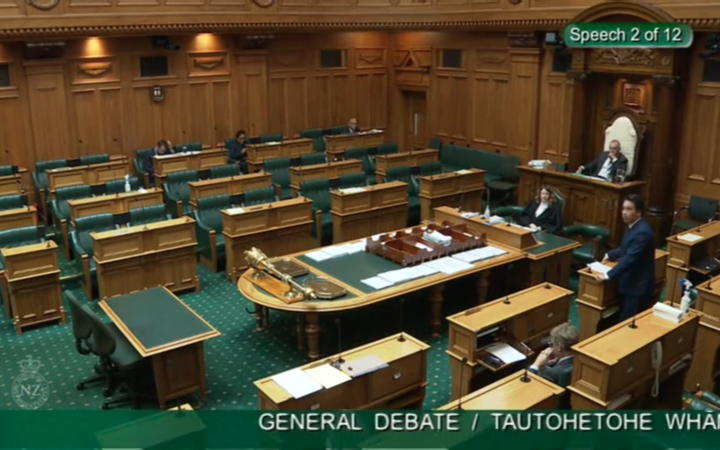 As the title suggests, this is a debate about general things.

Debates in the House are restricted to one topic and MPs are pulled up by the Speaker if they stray too far from the subject.

The easiest place to see this is in Question Time where the Speaker often warns a question asker to relate their follow-ups to their initial question.

To give MPs a chance to talk about other topics they hold a general debate once a sitting week but in their first week back at alert level 3 MPs decided to skip it so they could focus on other more urgent Covic-19 related work.

It's back now though (for the first time since 18 March) and to give a quick idea of what they talked about here are some talking points:

The General Debate consists of 12 speeches of up to 5 minutes. The spots are allocated roughly according to a parties size in the House so bigger parties get more speaking slots.

There is no official outcome or requirement at the end of a General Debate; the time just runs out and the MPs move on to another item of business. But in an election year it's a useful record for voters to check which MPs best match their own views.

A first reading debate is where the purpose of a bill is outlined and MPs indicated whether or not they're likely to support it.

The first bill is an omnibus bill which means it affects more than one Act (normally a no-no for bills). Altogether, the Covid-19 Response Bill amends or modifies the application of 45 different statutes.

Covid-19 affects so many things that passing a separate bill to fix each area would take too long so MPs voted to do it in one go. As a result the Bill makes changes to areas varying from changes to the Gambling Act so charities can collect lottery payments, to support for commercial renters who can't make payments. The Leader of the House Chris Hipkins summarises the Bill’s many changes in his first reading speech.

The second bill, on immigration, will also make a range of changes but all are intended to make the immigration system more flexible for a limited time - 12 months after they're enacted to be exact.

"Examples of how these powers could be used include making changes to visa conditions" Minister for Immigration Iain Lees-Galloway said.

"One power, the power to grant visas without an application, is likely to be used only in limited circumstances, such as where individuals are too unwell to be able to make an application. I'm hoping that this will not need to be exercised, but there is a precedent. This power would have been useful to support people severely injured in the Whakaari / White Island eruption."

Both of these bills passed their first reading with the support of all parties except for ACT which voted against the Covid-19 Response Bill.

After a first reading a bill is given to a select committee to look at more closely. Both of these bills have been sent to the Epidemic Response Committee which has just under a week to report back to the House on 12 May.