Do you remember that part towards the end of Inglourious Basterds when Christoph Waltz' character Colonel Hans Landa says "that's a bingo" and Brad Pitt's character Aldo Raine corrected him?

Well MPs often get stuff wrong in the House too and you can usually tell by the reaction from the Speaker.

To keep track of their mistakes and zingers, and for when the going gets boring I made a bingo card to keep myself entertained.

Whether you're a parliament geek or sentenced by employment to watch MPs attempt to outwit each other, this bingo is now here for you too.

There's a printer-friendly version of bingo after No.4, and because technically my job is to help people understand parliamentary procedure, there are explanations of each box below.

NB: Please don't send me complaints about how this isn't actual Housie even though it says it at the top. I know it's not but MPs sit in the House so I had to call it Housie, I just had to. 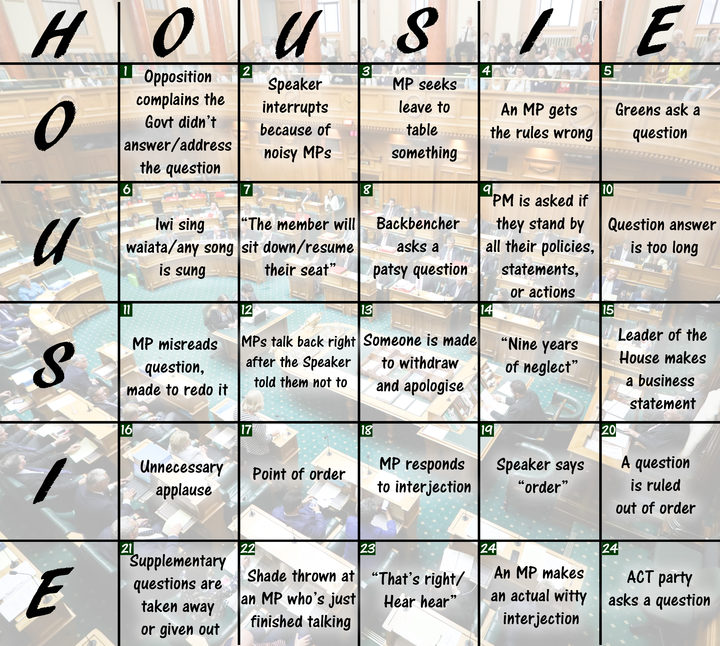 This happens all the time and it does often appear like a Minister is avoiding a question in their answers but the talented ones just know the steps to the dance.

Ministers do not have to answer a question, they only have to address it and whether or not they’ve done that is up to the Speaker.

It’s kind of like that scene in Shrek The Third when Pinocchio is questioned by Prince Charming on Shrek's whereabouts and says “it wouldn't be inaccurate to assume that I couldn't exactly not say that it is or isn't almost partially incorrect.”

2 - Speaker interrupts because of noisy MPs

The rules say that when an MP is giving a speech the others should shut up but MPs can’t resist the temptation to say something witty, or something that they think is witty.

So if they’re getting too rowdy the Speaker shushes them up.

Interjections aren’t actually allowed during question time either (because it’s not a debate) but they happen anyway and aren't stopped unless they get too disruptive.

3 - MP seeks leave to table something

Seeking “leave” is just another way of asking for permission to do something. There are lots of rules about how the House does things but MPs can do it differently if they all agree to.

Tabling a document is a chance for an MP to present a document (like a letter, or email correspondence) that other MPs may not have seen.

If the document is publicly available then it usually doesn’t count.  If anyone objects then it doesn't count.

The action of ‘tabling’ comes from literally putting the document on the table in the middle of the debating chamber but in reality an MP has until the end of the sitting day to give the document to the Clerk of the House who makes sure it’s all good to table.

4 - An MP gets the rules wrong

There are lots of rules many of which are written in confusing legal-parliament language and MPs get them mixed up all the time.

The rules for how things are done in the House are called Standing Orders of which there are about 400 (not including appendices) and these are referred to a lot in the House when people are misbehaving.

The Speaker will point out if an MP has got it wrong. Follow their cues. 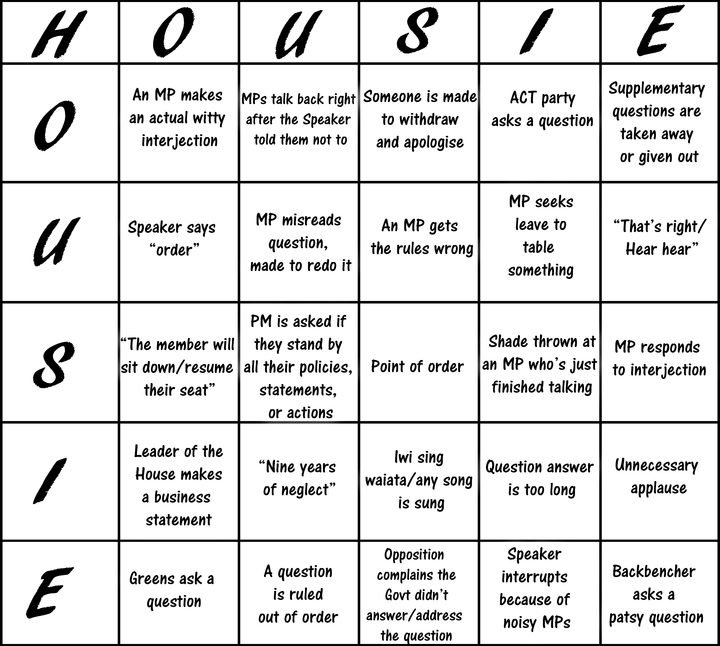 Here's another copy in a different order without the MPs in the background in case you want it. Photo: VNP / Daniela Maoate-Cox

Parties get a share of questions to ask Ministers at question time and in March last year the Green Party gave some of their allocated questions to the National Party so it's a rare occurrence when the Greens ask one themselves.

Green Party co-leader James Shaw said the move would help limit the number of “patsy” questions which are soft questions to Ministers from their own party MPs. Patsy questions usually give a Minister the chance to talk about a recent policy announcement; they’re prepared answers and often sound rehearsed.

Occasionally an Opposition MP will jump in with a supplementary to try and get a non-scripted answer.

The rules don’t really allow for singing in the House or any disruptive noise from the public galleries (the current Speaker Trevor Mallard was once arrested for causing a ruckus in the gallery).

But the House can change the rules if they want and often make allowances for songs to be sung to mark an occasion.

It’s common for waiata at:

The Speaker is usually informed beforehand so they can make sure the House pauses for the singing.

7 - ‘The member will sit down/resume their seat’

This usually happens when an MP is trying to argue with the Speaker. MPs that refuse to sit down or remain standing/arguing when the Speaker is standing are pushing their luck.

The Speaker can deduct supplementary questions as a punishment or order an MP to withdraw and apologise.

If they’re really bad they can be booted from the chamber or even Named which has consequences like pay deductions and temporarily removing that MP’s right to vote.

See Greens ask a question. A backbencher is anyone that isn't a front bencher, so Ministers and the Opposition's top dogs aren't normally in this category.

9 - PM is asked if they stand by all their policies, statements, or actions.

This is commonly the first question of question time and normally comes from the Leader of the Opposition to the Prime Minister.

It’s a broad question that conceals the question asker’s angle but it also means the PM can give broad answers.

10 - Question answer is too long

This usually happens in response to a patsy question when a Minister rattles of a big list of achievements. Rambling Ministers get cut off pretty quickly by the Speaker.

11 - MP misreads question, made to redo it

Oral primary questions to Ministers have to be submitted to the Clerk in the morning of each sitting day to make sure they meet the rules of the House. It also gives time for the Minister to form a reply to the initial inquiry.

They’re then published online before the House starts sitting (normally at 2pm) so if an MP doesn’t read the question as it’s written the Speaker will make them do it again.

12 - MPs talk back right after the Speaker told them not to.

The Speaker is the boss here and they don’t like it when an MP argues with them.

MPs still try it on though.

13 - Someone is made to withdraw and apologise

Everything that’s said in the House is assumed to be directed at the Speaker and there are also rules about the things you can say about other MPs, so If the Speaker hears an MP say something that’s out of line they’ll be made to stand up, withdraw the comment and apologise for it.

This is usually an interjection by an MP who’s off-mic or a Minister who can’t resist having a go at the opposition at the end of an answer.

The previous National-led Government was in office for nine years. The current Labour-led Government often uses this phrase in their speeches to indicate that many of their problems were caused by the last Government’s actions.

15 - Leader of the House makes a business statement

On Thursdays in sitting weeks, the Leader of the House makes an announcement about what they’ll be working on the next time the House sits.

Occasionally the Shadow Leader of the House (that’s the guy in Opposition who would have that job if their party was in Government) will respond to the business statement and ask questions like whether the Government plans to extend sitting hours, sit under urgency, or has anything planned that’s actually useful.

Applause that is unnecessary.

MPs will often clap for a colleague’s speech or remark even if it doesn’t deserve it. The Speaker will kill the MPs’ fun and tell them to stop clapping if it’s not the right time or if it goes on too long.

If an MP thinks a rule has been broken or they want to raise an issue they can raise a ‘point of order’.

Then they tell the Speaker what they think is out of order and the Speaker makes a ruling, which is a decision of whether they’re right or not.

Bonus points for multiple point of orders in a row (keep an eye on National’s Gerry Brownlee and Labour’s Chris Hipkins for examples of this).

Don't feed the trolls is a mantra often practiced in the House but sometimes MPs find responding too hard to resist.

Interjections happen whenever and wherever in the House but they only go on the recorded transcripts of the House proceedings (Hansard) if the MP who is speaking responds to it.

So if an MP doesn’t want an interjection recorded, they’ll ignore it.

This is basically the Speaker saying ‘settle down’. They say this word a lot.

20 - A question is ruled out of order

There are a range of reasons a question might be ruled out but the most common one is that the Minister is not responsible for what they’re being asked.

MPs will occasionally ask a question knowing the Minister isn’t in charge but do it anyway to try and score political points.

21 - Supplementary questions are taken away or given out

There are lots of rules around supplementary questions but the main one is that they are a privilege not a right.

It’s up to the Speaker to decide if they’ll be allowed at all but they have become expected in the House. Usually the first supplementary will be offered to the question asker but after that any MP can jump in with bigger parties having first dibs.

Over the years a system of allocating supplementary questions to parties has developed. Parties decide how they will use their quota and they can give some to other parties if they want to.

It’s this quota that the Speaker can deduct or add to depending on how MPs behave in the House.

This usually happens in a general debate or in first/second/third reading debates. Speeches are normally prepared in the House (though MPs aren’t meant to ‘read’ it out) and at the start they’ll leave a few seconds to comment on the last speaker like this line from Labour MP Angie Warren-Clark to National’s Scott Simpson:

“Ha! Not even a clap. Mr Simpson, you usually make a bit of sense, but today, alas, the conspiracy theory that you've brought up is indeed a sad indictment on how far the party has sunk.”

A common interjection from MPs when they think their colleague has made a good point.

Normally said loud enough to make sure it can be heard on the mics.

MPs love to interject but as us usual there are rules and in this case the rule is that says interjections must be “rare and reasonable”. The Speaker will often add that they also have to be witty. Have fun arguing with your co-workers over whether or not an MP is truly witty.

“Order! Order! The member will resume his seat. The Hon Kris Faafoi: interjections are meant to be rare, reasonable, and witty, and not draw the Speaker into them. The member failed on all three counts.”  - Speaker Trevor Mallard during a general debate when National’s Mark Mitchell had the call.

Questions are divided up between parties and it just so happens that smaller parties get fewer questions. When you’re a party of one, like ACT, it’s less common to have the spotlight in question time.