Lasers, sharks, coward punches and second languages have little in common except they're all the subject of member's bills drawn from the biscuit tin.

Most legislation comes from the Government but non-Ministers can also put forward bills; they just need a bit of luck and patience to do so.

On sitting days MPs work on legislation set out on what’s called an Order Paper and while it’s mostly filled with Government business there is space for "members orders" including members' bills.

Getting a bill on that order paper relies on chance. Bills are assigned a number and drawn at random from the biscuit tin which was bought in the 80s. 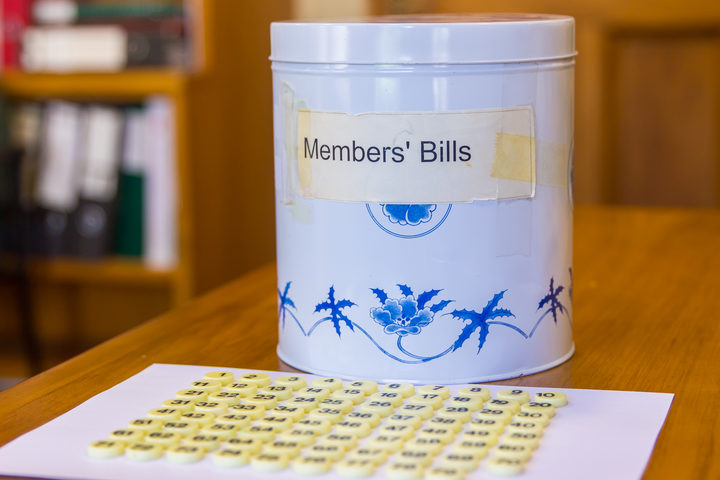 A member's ballot normally happens on a Thursday following a Wednesday Member's day in the House.  Photo: Supplied / Office of the Clerk

Some MPs wait years for their bills to be drawn and even if they are lucky they still have to exercise even more patience as they wait for their bill’s turn in the House.

Member's bills are only debated every other Wednesday so it can sometimes be months between a bill being drawn and its first reading but as soon as one on the list has its first reading a new one or a few are drawn to replace it.

Phil Smith spoke to some of the lucky ones who've had their bills drawn.

Officially the Education (Strengthening Second Language Learning in Primary and Intermediate Schools) Amendment Bill it will require the Government to identify at least 10 priority languages including te reo Maori and New Zealand Sign and then provide resources for schools to teach them.

"This is pretty significant for our nation," said Nikki Kaye. "I believe that not only from a cultural, economic but also social perspective, it's a really important piece of legislation."

"We've been piecemeal around language, we want to move in a greater direction to enable children to be able to be fluent in a second language."

This member's bill will create a new offence for a "king-hit" or "coward's punch" which cause the death of an individual.

"One of the main reasons is to bring attention, focus, to this type of offending and how one punch can kill," said Matt King.

Its full title is the Crimes (Coward Punch Causing Death) Amendment Bill and it also says those convicted would receive a maximum sentence of 20 years imprisonment.

"It's an intermediate step between grievous bodily harm which is a 14-year penalty and manslaughter which is life imprisonment," Mr King said.