Bookends for a career

Some MPs' public lives finish at the sharp end of the ballot box, but many MPs choose the time of their own departure and go without the element of surprise. Those MPs get to make valedictory statements - a last speech to the House, which is often funny and frequently bittersweet, with rueful glances back at the hard times as well as the victories.

At the other end of their career each MP makes a maiden speech, and they have a quite different feel. They are hopeful, bright eyed and have fewer punch lines.

They frequently list problems to solve, criticise the current state of politics and set herculean standards for what could be considered a successful career. Bill English's maiden and valedictory were fine examples of the forms. 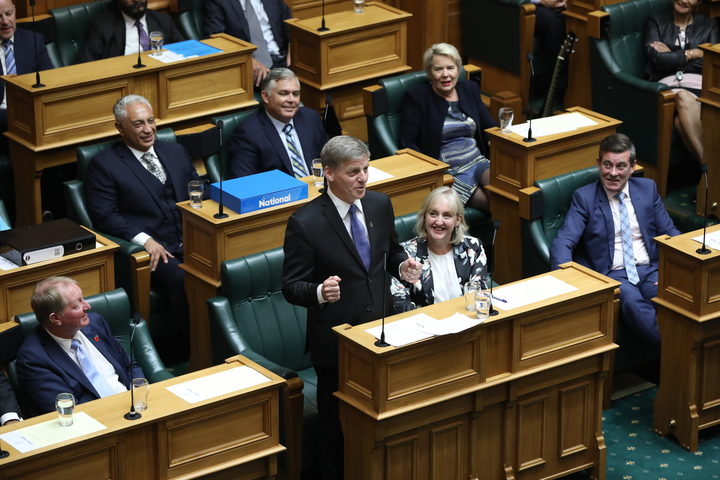 His first bookend took place way back in March 1991. Hansard has a record of his Maiden Speech as the new member for Wallace. He'd arrived with degrees in commerce and English literature, and turned a nice phrase. Here he describes his electorate.

"A million acres of mountains and bush untouched, some unexplored ...and all of it hostile and beautiful. Alongside that, there are thousands of acres of the best that can be wrought by man. The fertile land of Southland is walked by the feet of people who love it, who know it, and who sustain it. The early Maori crossed our plains from the south coast to Fiordland in search of their treasure, the pounamu, the greenstone. Then the early gold diggers passed from Bluff to Central Otago in search of their treasure. Now that land is peopled with the spirit of those who saw the treasure beneath their feet, and who stopped and cultivated the soil."

His valedictory was more about story-telling. He began with one at his own expense of how, as a disorganised young hopeful, he nearly missed the deadline for lodging his electoral nomination. Listen to the audio above for the story, he tells it well. 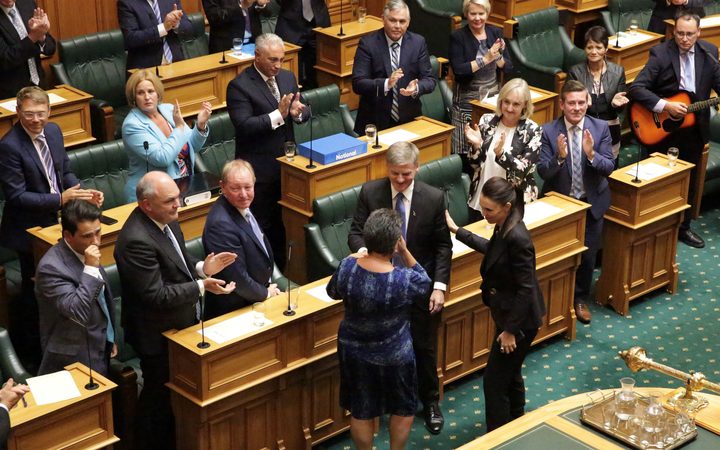 Bill receives congratulations from the PM, Jacinda Ardern and Paula Bennett. His class-mate of 1990, Nick Smith joined him on the front bench for his speech. Photo: RNZ / Richard Tindiller

He also talked about his brief experience of boxing training, which he said, taught him valuable lessons; including how to take a beating.

"It turned out... to be a great practice run for the 2002 election and the period beyond, for me. Because the composure I learnt under the tutelage of this hard-core Labour supporter, about how to stay composed when you're taking the punches, made all the different to my capacity to lead my party through a very difficult period."

In his maiden speech he had made his own jabs at MPs, saying that politics had lost its mana, and quoting a constituent who said that, “a politician these days has all the qualities of a good dog, except brains and loyalty!” 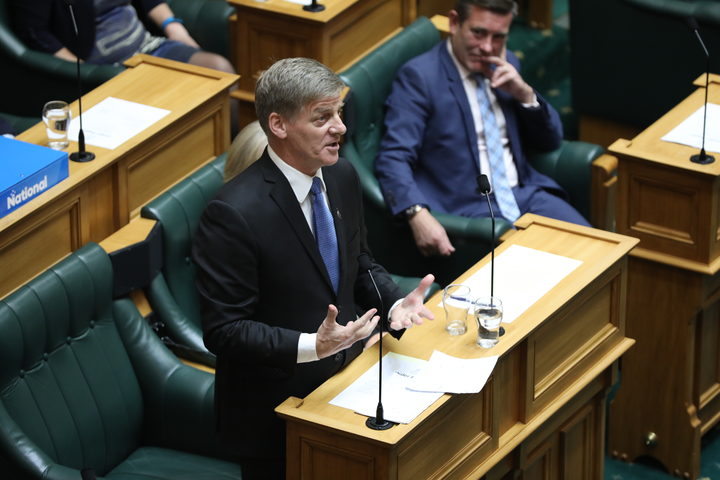 Maiden speeches, and even more so, valedictories are a rare occasion when an MP gets warm applause from both sides of the House.  Photo: VNP / Phil Smith

The composure he learned in the ring was something his young self might have been pleased with. He certainly set himself high standards in his maiden speech.

After possibly referencing one poem to powerfully end his maiden speech, Bill English quoted another, more local poem to end his valedictory.

He quoted the opening of James K. Baxter's New Zealand "These unshaped islands, on the sawyer's bench, wait for the chisel of the mind".  And noted that when, by the times he finishes he will have served 10,000 days since he was first elected. And then, tearing up a little, he concluded.

"I am satisfied, that every day, I took my turn with the chisel."